This article or section needs to be revised: many contradictions
Please help to improve it , then remove this flag. 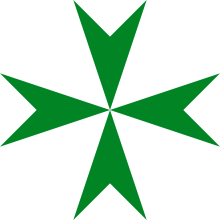 The green Amalfi Cross - the symbol of the Order of Lazarus

The Order of Lazarus or Order of Saint Lazarus (full name: Military and Hospitaller Order of Saint Lazarus of Jerusalem) was a Christian knightly order that was founded in Jerusalem in the 12th century as a spiritual knightly order and its origins in one of Saint Lazarus of Bethanien has a leprosy house ( Leprosorium ), which was located outside the city wall, near the New Gate and which had been run by Armenian monks for ages. The seat of the Grand Magisterium was Jerusalem, then Boigny . In the centuries of his work he has become known beyond Jerusalem as the order of nursing . His hospital activities have received their historical recognition in the emergence of the term " Lazarett " and in the green cross of the pharmacists. For centuries the order was involved in the hospital care of mainly lepers. The order carries a green eight-pointed cross as a symbol.

The old order was dissolved in 1830, but restored in a modern form. Today there are various associations, foundations and organizations that carry on the name and tradition of the order.

The religious community developed around 1198 from a monastic hospital fraternity that ran a leprosy outside the city walls of Jerusalem and took in and cared for lepers . The order followed the rule of Augustine of Hippo . From the extensive hospital work of the Order of Lazarus over centuries, the term "Lazarett" emerged as a synonym for hospital and hospice. A simple, pawed green fabric cross on the chest of the black habit or on the left shoulder of her coat was - probably since the 12th century when Raymond du Puy was Grand Master of the Hospitallers and Lazarites at the same time - the symbol of the Order of Lazarus. Originally the Lazarus Order was purely hospitalized, but at the time of the Crusades it increasingly took on military tasks in the Holy Land. In the 12th century the order spread to the countries of origin of the crusaders. After the loss of the Holy Land, the Order moved to Europe. From 1308 the order was under the hereditary protectorate of the French kings, which lasted until 1830.

The first documentary mention of the Order of Lazarus can be found in a papal bull from Pope Benedict IX in 1043 . in which he granted the order certain privileges. But a hospital outside the city walls of Jerusalem, which was run by Armenian monks, has been known since the 4th century. From the 9th century onwards, there were two more hospitals in Jerusalem, the Marienhospital and the Hospital of St. John, from which the Hospitaller and Johanniter Order later emerged. These three hospitals were commonly known as the "Hospital of Jerusalem".

Since 1142 at the latest, the Jerusalem Leprosy Hospital received a number of properties, churches and rights in the Crusader state through donations. Goods are u. a. attested in Jerusalem, Tiberias, Ascalon, Caesarea and Acre (from 1161 and 1165 respectively). Around 40 documents from this period have come down to us, with Knights Templar often being named as witnesses to the donations.

Similar to the other knightly orders, the Order of Lazarus was also firmly integrated into the society of the Crusader states : The legal text known as Le Livre au Roi from the late 12th century urged feudal men of the Kingdom of Jerusalem to join the order in the event of an incurable outbreak of the disease . In the advancing 13th century, healthy people were also allowed to join the order, which means that the order also performed duties typical of knightly orders, such as guarding a section of the city ​​wall of Acre . This was a wall section of the newly built wall around the northern district of Montmussard, in which the properties of the order were (hospital, church, commandery).

As early as the 12th century, the order spread to the countries of origin of the crusaders. King Louis VII of France granted the order royal status in 1154 and assigned it to Boigny Castle near Orléans as its seat.

The activities of the order were originally of a purely hospital nature. When exactly the conversion into a knightly order took place is not recorded with the year. The assumption of military functions resulted gradually from the fact that the religious orders of knights in the Holy Land, especially the Templars , probably also the Johanniter , perhaps also the Teutonic Knights , transferred their confreres suffering from leprosy to the Order of Lazarus. There is little evidence of the order's military activity. The only clearly documented combat missions are those described below at La Forbie 1244, al-Mansura 1250, Ramla 1252 and Akkon 1291. Presumably the brothers of the Order of Lazarus were at a disadvantage in fighting because of their illness, in any case they always suffered high losses. Not only sick but also healthy friars may have participated in the fighting. No provisions for military service can be derived from the order's rules, which have only survived in fragments - hospital service was always the focus of the order's activity.

It is highly unlikely that as early as the Battle of Montgisard in 1177 a contingent of the Order of Lazarus contributed decisively to the victory over Saladin's army - King Baldwin IV , himself a leper, even kept his distance from the order for political reasons ; he gave a below-average number of donations to the Lazarites.

Patriarch Robert of Nantes reported to the Pope that in the battle of La Forbie on October 18, 1244 all the Knights of Lazarus who were present were killed. The order took part in the sixth crusade from 1248 to 1250 and received from King Louis IX. France donated a house in Damiette , which had to be cleared after the city was abandoned in May 1250. During the battle of al-Mansura , which was decisive for the crusade , the Lazarus knights suffered heavy losses. In 1252, the Order attacked an Arab caravan near Ramla in an attempt to steal a large herd of cattle. However, the Lazarus knights were defeated after a battle with Saracen warriors. According to Joinville , only four Knights of the Order survived the battle.

In 1253 Pope Innocent IV gave the order permission to appoint grandmasters who did not suffer from leprosy. In 1291 twenty-five knights of the order took part in the defense of Acre , all of whom were killed during the battle. The Order was then forced to leave the Holy Land and Boigny became the seat of the Grand Magisterium. Nine years later, Urban IV placed the Lazarites under the direct protection of the Holy See . He called the order "ordo militia" and put it on a par with the great orders of knights of the time.

In 1308, King Philip IV of France placed the Order of Lazarus under the hereditary protectorate of the French crown, which would last until 1830. In the course of the 14th and 15th centuries, the order again developed occasional military activities in addition to the hospital service for lepers.

With the Bull Nos igitur of March 28, 1489, Pope Innocent VIII ordered the incorporation of the Order of Lazarus and the Order of Canons of the Holy Sepulcher into the Order of St. John. However, implementation of the bull was limited to a few areas where the property actually fell to the Order of St. John. Due to the resistance of various rulers, the implementation of the bull turned out to be impracticable. The French king saw in the bull the pragmatic sanction of Bourges violated and with it his royal sovereignty. He negated the bull without further ado and at the same time confirmed its privileges to the order. The Order of Lazarus thus continued to exist unhindered at its headquarters in Boigny - as in all other areas that were under Boigny and were outside France. In the following years the bull was gradually withdrawn.

Due to the intervention of Emperor Charles V, Pope Leo X restituted the Sicilian branch of the order, more precisely the priory of Capua, which split from the French branch in Boigny in 1517. Pope Pius IV subsequently attempted, with the Bull Inter assiduas of February 9, 1562, to restore all privileges only and exclusively for the Capua Priory of the Order of Lazarus.

The 1572 by Pope Gregory XVI. The Mauritian order founded was the reason why the Capua Priory only had a short existence. In November of the same year it was united with the Capua Priory to form the "Order of Saint Mauritius and Lazarus" .

In France, the Grand Master of the Order of Lazarus, Philibert Marquis de Nérestang (1604–1620), was also appointed Grand Master of the Order of Our Lady of Mount Carmel in personal union . The orders were not united, but continue to exist as two orders in personal union. Since then, the official designation in France has been kept in the plural (“Ordres Royaux, Militaires et Hospitaliers de Notre-Dame du Mont-Carmel et de Saint-Lazare de Jérusalem”) to represent the true independence.

In the 17th and 18th centuries, the Order of Lazarus advanced to become one of the most important orders in France and experienced a prosperous period that ended with the revolution .

The Royal Almanac of the reign of Louis XVIII. von France (r. 1814–1824) continues to list the Order of Lazarus as an existing order and in 1824 names Ludwig's successor Charles X as protector of the order. During the July Revolution and Charles' abdication in 1830, the order finally lost the protection of the French kings and the order was abolished by the French government under King Louis-Philippe I and would have expired no later than 100 years after the death of the order members who were still alive at the time.