Carl Pulfrich (born September 24, 1858 in Sträßchen, today in Burscheid ; † August 12, 1927 in the Baltic Sea near Timmendorfer Strand ) was a German physicist and optician . He is considered to be one of the founders of stereophotogrammetry .

Carl Pulfrich was the eldest son of a teacher. After attending the secondary school in Mülheim an der Ruhr , he studied physics , mathematics and mineralogy at the University of Bonn and received his doctorate in 1881 with the thesis Photometric investigations on the absorption of light in isotropic and anisotropic media . After completing military service and a year as a trial teacher at a grammar school in Essen , he became an assistant to Rudolf Clausius at the physics institute of the University of Bonn and, after his death in 1888, to Heinrich Hertz . After his habilitation in experimental physicsPulfrich was a private lecturer in Bonn. In 1890 Ernst Abbe was able to persuade him to take up a job at Carl Zeiss in Jena , where he stayed until his death. From 1892 he headed the newly established department for physical measuring instruments.

Although Carl Pulfrich was blind in the left eye and therefore could not see in three dimensions, most of his scientific work dealt with three-dimensional vision, stereoscopy . According to his own statement, the blindness was the long-term consequence of a bloody eye injury in his youth. According to his colleague Moritz von Rohr, he had been suffering from cataracts in the left eye since 1905 .

Pulfrich married Mathilde Doll in 1891, daughter of geodesist Max Doll (1833–1905) and sister of Elisabeth, the wife of Heinrich Hertz '.

While on vacation, Carl Pulfrich drowned in the Baltic Sea after his canoe capsized. 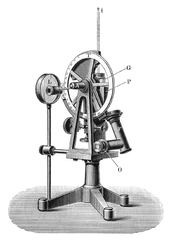 His work comprised three main phases: from 1885 to 1899 he devoted himself to refractometry (measurement of the refractive index), then to 1920 to stereoscopy and later to photometry . In the first phase, the construction of the Pulfrich refractometer, which grew out of the investigation of the refractive index of crystals , falls . After moving to Zeiss, he perfected numerous devices dating back to Abbe. In 1899 he presented his first spatial distance meter , which was followed in 1901 by the stereo comparator , which was successfully used in cartography , but also in astronomy . A further development was the stereo autograph invented by Eduard von Orel (1877–1941) , with which it was possible to carry out the automatic mapping of an area from two photographs. After his discovery of the Pulfrich effect , the focus of his work shifted towards photometry and color theory . The result of this work was the Pulfrich step photometer , which was widely used as a color and turbidity meter .

In 1917 the Prussian government gave Carl Pulfrich the title of professor. The Technical University of Munich made him an honorary doctorate in August 1923 . In 1926 he was elected a member of the German Academy of Sciences Leopoldina .

He was the bearer of the Red Eagle Order IV class and the Officer's Cross of the Franz Joseph Order .

The Carl Pulfrich Prize has been awarded for services in the field of surveying since 1968 .

In Jena a street is named after Carl Pulfrich and in the Antarctic the 1250  m high Pulfrich Peak on the Arctowski Peninsula .

In 2020 a crater on the dwarf planet Pluto was named after Pulfrich. He was honored for his invention of the blink comparator , with which Pluto was discovered in 1930.