The point is to convert -dimensional volume integrals over the interior into -dimensional edge integrals over the surface of the volume piece . Often only special variants of the general theorem are considered, from which the general principle is more or less clear, but which are important for the respective applications. The two most important special cases, the Gaussian integral theorem and the special Stokes integral theorem (see below) come from vector analysis . In physics and electrical engineering , Stokes 'or Gauss' special theorem allows elegant ways of writing physical relationships, for example in the integrated forms of Maxwell's equations .

Let be an oriented n-dimensional compact differentiable manifold with a smooth edge in sections with induced orientation . This is the case for most illustrative examples, such as the full sphere with rim (sphere) or the torus (lifebuoy).

Furthermore, let an alternating differential form of degree be defined on (or in a sufficiently large open environment) , which is assumed to be continuously differentiable .

Then the following statement applies, named after Stokes:

where denotes the Cartan derivative . The right integral can be understood as a surface integral or more generally as an integral over the manifold .

The Cartan derivation is here to a certain extent "dual" to the topological operation , which results in the cross-relation contained in this formula between aspects of analysis and topological-algebraic aspects. 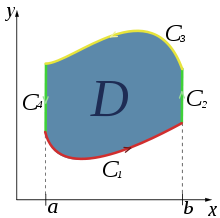 Under the very general assumption that   applies with -dimensional base forms , for example with

and with the external product , which among other things fulfills the condition of antisymmetry , the external derivation specifically says the following:

The proof of the “main theorem” becomes particularly easy if, as in the adjacent example of a normal area, the integration manifold (named in the drawing ) can be segmented into vertical stripes (in the direction) so that only on the yellow “upper side” and on the The red "underside" of the posts results in non-trivial contributions, because of the orientation (the arrow directions) with opposite signs .

Be open and be a continuously differentiable form in . Then for every oriented compact frameless -dimensional submanifold the statement applies :

Stokes' (general) theorem is mainly used in mathematics. He

Let be a smooth -Simlex and a smooth, closed differential form on the smooth manifold . Then the integral over is defined by

It denotes the return transport from regarding . The definition makes sense since it is a smooth submanifold with border and induced orientation of . (Or you simply understand it as a closed subset of the .) In this case , the definition corresponds to the usual curve integral . Is a smooth - chain of the singular complex , then the integral is over defined as

In the event you find the definition and more information in the article cycle (function theory) .

Let be a smooth chain of the singular complex and a smooth differential form on the smooth manifold . Then applies

With which is boundary operator of the singular complex called.

This theorem shows a connection between differential geometric and topological properties of a smooth manifold. If one considers the De Rham cohomology and the singular homology of , one obtains through

The last equality holds because it is an element of De Rham cohomology and therefore holds. If an exact differential form then applies

According to de Rham's central theorem, homomorphism is even an isomorphism .

Behind Stokes' theorem there is a general topological principle which, in its simplest form, states that in the case of “oriented paving of an area” inside, the paths “due to oncoming traffic” cancel each other out in pairs, so that only the edge curve remains.

On the left in the sketch you can see four small, identically oriented “paving stones”. The “inner paths” drawn in the middle are traversed in pairs in opposite directions; their contributions to the line integral therefore cancel each other out, so that only the contribution of the boundary curve remains. It is therefore sufficient to prove the integral theorems only for the smallest possible “paving stones”.

If the paving is sufficiently refined , this is generally almost elementary.

Law of differential and integral calculus

Let be an open interval and a continuously differentiable function. Then there is a 1-form (so-called Pfaff's form ), and the general Stokes' integral theorem degenerates to

This is the main theorem of differential and integral calculus.

For a compact subset of and an n-dimensional vector field , the Gaussian integral theorem is obtained as a further special case.

The -dimensional normal is the unit vector and the integrals are now - or -dimensional, where the size is also written as. One chooses

so the Gaussian integral theorem results from Stokes's.

This theorem can also be used to define the divergence of a vector field , this definition being independent of the coordinates used. 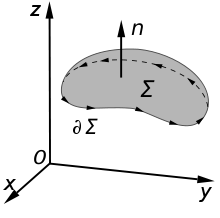 Regarding the classic Stokes theorem : The (curved) surface , its boundary curve (indicated by the arrows) and the normal vector (mentioned in the text ) are shown.

The classical Stokes integral theorem is also known as the Kelvin-Stokes theorem, or the law of rotation . It is used by physicists and electrical engineers, especially in connection with Maxwell's equations. It states that an area integral can be converted into a closed curve integral through the tangential component of the vector field via the rotation of a vector field . This is helpful because the curve integral contains the vector field alone and is usually easier to calculate than area integrals, especially if the area under consideration is curved. In addition, the curve integrals are directly affected in many applications - and only secondarily the associated area integrals - for example in Faraday's law of induction . Given specifically , the fact that many different manifolds can be  "squeezed" into a single closed boundary manifold leads to the gauge invariance of theories such as Maxwell's .

Let it be an open subset of three-dimensional space and a defined vector field that is once continuously differentiable. This is required so that the expression can be formed. Furthermore, let be a two-dimensional regular surface contained in , which is oriented by a unit normal field (that is, let us define what the “upper side” of the surface is). In addition, the tangent unit vector is the boundary curve. The regular property ensures that the edge is sufficiently smooth.

The edge of is denoted by. In the following, this edge is always identified with a closed curve. With all of these conditions applies

You also write in the applications

with and . Furthermore, the rotation, and (or ) is the scalar product of the two vectors . The shape is the volume shape of the two-dimensional surface and is the length element of the boundary curve.

In the event that represents a flat subset , in appropriate coordinates . If not flat, it can be, provided that the two-dimensional surface with the parameterization

can be broken down into segments, the volume form for solid through

to calculate. The vector can also be calculated in an analogous manner, namely the unit vector formed from the three components of the vector product , that is to say

According to Stokes' theorem,

This example shows that Green's theorem is a special case of Stokes's integral theorem.