South Georgia ( English : South Georgia, Spanish : Isla San Pedro or Georgia del Sur ) is both the name of an individual island and the name of the archipelago to which it belongs. Politically, the area belongs to the British overseas territory of South Georgia and the South Sandwich Islands and, like the Falkland Islands , is claimed by Argentina .

The island area is located in the South Atlantic about 1400 km east of the east coast of South America ( Argentina ) or the offshore Falkland Islands .

The following archipelagos and individual islands belong to the island area of ​​South Georgia:

The main island of South Georgia is around 160 kilometers long and up to 30 kilometers wide. It covers an area of ​​3756 km², ie over 96% of the total land area of ​​South Georgia and the South Sandwich Islands (3903 km²). The mountainous, rugged and mostly ice-covered landscape makes most of the main island and the other islands belonging to the area difficult to inhabit. Eleven mountains in South Georgia are over 2000 m high; the highest point is Mount Paget at 2934 m.

South Georgia does not have a permanent civilian population. Most of the time, government officials, researchers or other staff stay on the island all year round. On the east coast of the island is Grytviken, the former capital of South Georgia, which is no longer inhabited all year round. Two seconded government officials with spouses are permanently stationed in King Edward Point, about a kilometer away . In summer, up to four museum employees of the South Georgia Museum also live there . In winter, nine researchers from the British Antarctic Survey live in King Edward Point, in summer there are up to 18 people. The duties of government officials include port captains , overseeing border control and customs , fishing and tourism . There are also around 25 employees of the British Antarctic Survey in the station at King Edward Point and in the station on Bird Island on the north-western tip of the island. The Government of the Overseas Territory of South Georgia and the South Sandwich Islands themselves reside in Stanley in the Falkland Islands . The permanent presence of staff at the station also serves the political purpose of underpinning the British claim to sovereignty over the island over Argentina's territorial claims.

The flora of South Georgia is limited to the slopes and plains of the fjord regions . About 50 species of higher plants are known that grow on South Georgia, the most dominant species being the tussock . There are also mosses and lichens . Trees and bushes are completely absent.

South Georgia is one of the most important breeding areas for the king penguin . It is estimated that around 400,000 animals of this species live there. The population of golden crested penguins is estimated at around five million specimens. Furthermore, South Georgia is an important habitat for elephant seals and Antarctic fur seals . There are also four other seal species: leopard seal , crabeater , Weddell seal and sub-Antarctic fur seal .

Reindeer , rats and mice have been released or introduced by humans. In 2009 a project was started with the aim of completely eliminating the rat population that had arisen since the 19th century due to the ecological damage within four years by using Brodifacoum . The first successes were already achieved in phase 1 in 2011. In phases 2 (2013) and 3 (2015) baits were applied throughout the entire rat-populated area. A local limitation of the control was only possible because the glaciers reaching into the sea represent a natural barrier for rats, as well as the high mountains. Monitoring was maintained until the end of 2017. In May 2018 it was reported that the action had been successfully completed and that there were no more rats in South Georgia. The widespread use of rat poison also resulted in fatal poisoning of birds and other animals.

In November 1911, Carl Anton Larsen and Lauritz Edward Larsen attempted to resettle reindeer ( Rangifer tarandus ) on South Georgia near Ocean Harbor . Two more attempts were made in 1912 and 1925. Since then, the number of reindeer has increased dramatically (from 10 to over 6,600). This had a destructive effect on the native vegetation and thereby also on the marine bird world. Especially the tussock grass, the flowering plants and the lichens suffered from the feeding pressure. From 2013, the reindeer were therefore removed again by Norwegian reindeer specialists with a combination of rounding up and ground hunting . The campaign was successfully completed in 2014. The meat was offered for sale in the Falkland Islands .

A seabird and seal observation station is also located on Bird Island , a small island off the northwest tip of South Georgia.

The south coast is exposed to the Furious Fifties , so the weather is cold, stormy and generally very inhospitable. The north coast lies in the lee of the mountains, and the weather is much more pleasant, the bays are quieter.

Overall, the climate is harsh, cool and humid. In winter (June to August) most of the island is covered with snow, but there are also some coastal strips that remain largely free of snow all year round. The temperatures in July are just over 0 ° C during the day and frosty at night. There are also frequent snowstorms and fog that lasts for days. The sun rarely shines in winter. Although the sea does not freeze over in winter, there are often fields of drift ice in this region.

Spring begins in September, then it gradually becomes milder and the sun shows up more frequently. In November the coasts are mostly ice-free.

Summer is only short and very cool at barely 10 ° C. Even at this time of the year there can be frost at night and even occasionally snow. The peaks of the mountains further inland are covered in snow all year round. Summer is also the rainiest time of the year. Storms and heavy rainfall, such as in winter, are also common in summer; the sun is usually only visible for 5 to 6 hours a day. The most common weather conditions in summer are rapid changes from sunshine to cloud cover with occasional rain showers.

In March, when autumn begins, it gets cooler and darker again; The first snow usually falls in May or June.

Every year, South Georgia receives around 1500 mm of precipitation with around 165 rainy days. In contrast, the sun can only be seen around 1200 hours a year. The water temperatures usually fluctuate between 3 and 6 ° C. 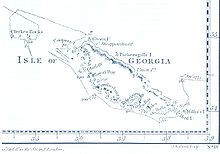 South Georgia was probably discovered in April 1675 by the English merchant Anthony de la Roché . This got into bad weather off Cape Horn and was drifted far off course. He sighted a vast, mountainous country with deep bays, which was then called Roche Island on some historical maps . Due to its geographical location, it could only have been South Georgia.

In 1756 the island was discovered by the French navigator Nicolas Pierre Duclos-Guyot (1722–1794). In 1775 the English navigator James Cook sighted them again, landed on January 17th on board the HMS Resolution in a bay and named it Possession Bay . Cook mapped part of the coastline and sailed on to the southern tip of the island, which he then called Cape Disappointment , because he now realized that this island (South Georgia) could not be the Antarctic continent he was actually looking for. Cook then named the island "Isle of Georgia" in honor of King George III.

In the southern summer of 1877/78 Heinrich Klutschak circled South Georgia on the sealer Flying Fish and created an improved map of the island, probably the fourth after James Cook, Issac Pendleton (1777-1804) and Fabian von Bellingshausen .

In the course of the first International Polar Year from August 1, 1882 to August 31, 1883 , a research station was set up on South Georgia in Royal Bay , in Moltke Harbor. The aim of this international polar year expedition to South Georgia was the determination of climate and geophysical data by simultaneous meteorological, magnetic and ground measurements. An additional goal of the research trip was to observe the very rare Venus transit in front of the sun on December 6, 1882. The expedition was led by Carl Schrader and members Karl von den Steinen (doctor and ethnologist ), Peter Vogel (mathematician), Otto Clauss (astronomer and physicist; 1858–1891), Hermann Will (botanist and geological collector) and E. Mosthaff (engineer and painter) each consisted of a mechanic, cook, carpenter, sailmaker and boatman. The members reached South Georgia for the first time on August 12, 1882 on the SMS Moltke under Captain Pirner. After eight days of poor weather conditions, they reached a suitable spacious port in Royal Bay on the northeast coast of the island. When they arrived, they set up the material stores with the help of 100 seafarers and brought 40 tons of coal ashore. They also built wooden huts, the observatory for observing the transit of Venus, sheds for equipment and a stable for three cattle, seventeen sheep and nine goats. On September 3rd, the preparations were completed. Then Captain Pirner left the island with the SMS Moltke . During the following year, regular meteorological observations, measurements of magnetism and astronomical observations were made. The shores of Royal Bay and the outer coast to the north were explored. There were also smaller mountain climbs and visits to two large glaciers that flow into Royal Bay. On September 1, 1883, the corvette Marie entered the port in Royal Bay under Captain Krokisius. On September 6, 1883, the expedition on the Marie left the island in the direction of Montevideo .

From the beginning of the 19th century to the middle of the 20th century, South Georgia was primarily used as a land base for seal hunters and whalers . The British polar explorer Ernest Henry Shackleton reached South Georgia at the end of the dramatically failed Endurance expedition . His ship, the Endurance , had been crushed in the pack ice and the crew managed to escape across the ice to Elephant Island . Six men sailed to the south coast of South Georgia in the James Caird lifeboat . Shackleton crossed the glaciers on foot and arrived in Stromness on May 20, 1916 . Then he managed to organize the rescue of the entire team.

In 1928 Ludwig Kohl-Larsen , his wife and the cameraman Albert Benitz came to the island for the first scientific exploration. A plateau is named after Kohl-Larsen.

During the Falklands War , South Georgia was briefly under Argentine occupation. On April 25, 1982, the islands were retaken by the Royal Navy and landing forces.

During the time of the whaling industry , the following places (from north to south) were founded and abandoned:

Since the decline of the whaling industry on South Georgia, the island's main industries have been deep-sea fishing and tourism, although the trawlers working in the island's fishing zone usually do not call at the island itself. Tourism is particularly concerned with expedition cruise ships that call at South Georgia on their way to Antarctica .