The title of this article is ambiguous. Further meanings are listed under Inverness (disambiguation) .

Inverness [ ˌɪnvərˈnɛs ] ( Gaelic : Inbhir Nis [ iɲɪɾʲˈniʃ ] "mouth of the Ness") is the capital of the Scottish administrative district Highland and since December 2000 has been the only city in the district to have the status of a "City". The city lies at the confluence of the River Ness and the Moray Firth . It is the northernmost "city" in the United Kingdom.

Since there is no generally applicable definition of the city limits, the information on the population fluctuates between a good 40,000 and over 65,000 inhabitants. The 2011 census determined a population of 48,201.

The place and its surroundings are steeped in history. Macbeth ruled the castle of Inverness in the 11th century , although not as cruelly as William Shakespeare portrayed. In place of his castle, there has been a representative castle on the hill since the 19th century . By the Great Glen and by Loch Ness leading Caledonian Canal (Caledonian Canal) runs diagonally through Inverness-shire and has been in the city's eastern entrance.

A few kilometers to the east is the battlefield of Culloden , where the last battle of the Jacobites against the British government troops in 1746 ended with a devastating defeat of the Jacobites. The Clava Cairns are nearby . 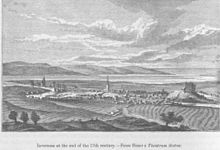 Inverness at the end of the 17th century

Traces of prehistory can be found in the Clava Cairn by Culdoich .

Inverness was one of the main castles of the Picts and was visited in 565 by Columban of Iona , who had the goal of proselytizing Brother I, the Pict king. Brude I ruled from the fortress on the hill Craig Phadrig (168 m), 2.4 km west of today's city center.

A church with a small monastery complex had already been founded on St Michael's Mount by early Celtic monks. This hill is close to the river and is now the location of the Old High Church .

The castle over the city of Inverness was built by King Malcolm III. ( Máel Coluim mac Donnchada , * 1030, † 1093), eldest son of Duncan I ( Donnchad mac Crináin , * 1001, † 1040). The reign of King Duncan I was shaped by the conflict with his cousin Macbeth ( Mac Bethad mac Findlàich , * 1005, † 1057), the exact circumstances of which are not known. All that is known is that Duncan I was killed by Macbeth in the battle near Elgin . In the portrayal of William Shakespeare , Macbeth had Duncan I killed in Inverness Castle and Malcolm III. is said to have avenged his father's death by destroying the castle in order to create a new complex at this point.

Inverness's strategic location has led to much conflict in the region. Allegedly there was a battle between King Malcolm III in the early 11th century. and Thorfinn from Norway at Blar Nam Feinne, in the southwest of the city.

The city of Inverness has repeatedly by residents of the Hebrides attacked, especially in the 15th century by the MacDonald - Clan . In 1187, Donald Bane led the enemy islanders in the Battle of Torvean against the men of Inverness Castle, led by Duncan Mackintosh. Both were killed in the battle, Donald Bane is said to have been buried in a large pile of stones near the river. An elaborately crafted silver chain was found in the area in 1968.

Other battles against the MacDonald Clan are documented in 1340 (Battle of Blairnacoi on Drumderfit Hill), 1411 and 1427 (Donald of Islay and James I besieged the city). In 1554 the Munro Clan defeated the Mackintosh Clan in the Battle of Clachnaharry, west of the city. The MacDonald Clan and their allies stormed Inverness Castle in 1491.

In 1562 the Queen of Scotland Mary Stuart (* 1542, † 1587) was denied entry to the city by the English governor in the Huntly uprising. The clans Munro and Fraser then took the castle for them. The house she lived in was on Bridge Street and it was demolished in the 1970s. Since 1986, the Marymass Market has been held annually on the first Saturday after August 15th to commemorate Queen Maria I.

Four fairs have been held in Inverness since the 11th century, one of which was Legavrik. William I the Lion (* 1143, † 1214 at Stirling Castle ) granted Inverness four charter, including the right to build Inverness Castle and to fortify the city.

Alexander II (1214–1249) founded a Dominican monastery in 1233, of which only a pillar and a weathered knight's portrait survived in a secluded cemetery near the city center.

Under Oliver Cromwell (* 1599, † 1658) a citadel was built on the northern city limits, which could accommodate over 1000 people. With the exception of part of the city wall, the complex was torn down during the restoration except for a bell tower. In 1715 the Jacobites occupied the royal fortress and used it as barracks until 1746, in 1727 Fort George was built.

Not far from Inverness is Culloden Moor , the site of the Battle of Culloden in 1746 that ended the Jacobite Rising of 1745.

On September 7, 1921, the first British Cabinet meeting outside London took place in the Inverness Townhouse, as British Prime Minister David Lloyd George was on vacation in Gairloch and called an extraordinary meeting to discuss the situation in Ireland. The Inverness Formula was the basis of the Anglo-Irish Treaty .

Most of the traditional industries, such as whiskey distillation, have been replaced by high-tech companies.

The operation of the Inverness Distillery , founded in 1807, later Millburn Distillery , was discontinued in 1985 due to a lack of expansion opportunities and sales difficulties during the whiskey crisis . In 1988 the distillery was torn down, the remaining objects are currently only used as a restaurant and as a small bottling plant.

The Highlands & Islands Enterprise Plan (HIE) funded the Center for Health and Science to attract additional companies in the medical technology and medical device industries.

The Scottish Natural Heritage is an agency responsible for the preservation of Scotland's natural heritage. The head office was relocated from Edinburgh to Inverness in 2003/2004 and provides a large number of jobs in the region.

Scottish Gaelic appears on the majority of road signs around Inverness and a significant number of people speak the language. Bun sgoil Ghàidhlig Inbhir Nis was opened in August 2007 as a native-speaking primary school , it is to be expanded in order to be able to accept more students in the next few years.

The organization Bord na Gàidhlig , responsible for supporting and promoting the use of Scottish Gaelic, maintains its main office in Inverness.

Inverness city center is located on the east bank of the river and is connected to the west side of the city by three road bridges (Ness Bridge, Friars Bridge and Black Bridge, also known as Waterloo Bridge) and the Greig Street Bridge as a pedestrian bridge. The traditional city center is a triangle bounded by High Street, Church Street and Academy Street and within which Union Street and Queensgate run as cross streets parallel to High Street. Between Union Street and Queensgate is the Victorian Market , which contains a large number of small shops. From the 1970s, the Eastgate Shopping Center was built on the east side of the High Street and construction was completed in 2003 after a substantial expansion.

Inverness train station , designed as a terminus , is almost directly opposite the Academy. There are rail links on the Highland Main Line to Perth, Edinburgh, Glasgow and London. The Far North Line leads to Thurso and Wick on the north coast, the Kyle of Lochalsh Line to the eponymous town Kyle of Lochalsh on the west coast. Additional trains operate on the route via Elgin and Keith to Aberdeen. With two exceptions, all trains are operated by Abellio ScotRail . The London North Eastern Railway company operates the Highland Chieftain , a daily pair of high-speed trains between Inverness and London. The Caledonian Sleeper night train operated by Serco , which runs six times a week, also goes to London .

The airport Inverness Airport Dalcross is located 15 km east of the town and offers flights to London, Manchester, Edinburgh, Belfast and to the islands north and west of Scotland. Local controversy arose when British Airways wanted to sell land slots at London Heathrow for the three daily flights to and from Inverness as part of the planned and later failed use by American Airlines. Flybe flies from Inverness to Gatwick , Stornoway , Manchester, Belfast, Birmingham and Amsterdam. Highland Airways operates routes to Stornoway and Benbecula. Loganair has daily connections to Stornoway, Kirkwall and Sumburgh . KLM Royal Dutch Airlines offers flights to Amsterdam . The low-cost airline EasyJet flies to London Gatwick and Geneva , among others .

Inverness is the central hub in the Highlands road network. It is on Scotland's most important north-south connection, the A9 , which runs from the Central Belt via Perth to Thurso and Scrabster on the Scottish north coast. The A82 connects Inverness to Glasgow via Fort William , the A96 leads to Aberdeen via Elgin . There are plans to convert the A96 into a four-lane road between Inverness and Nairn .

Inverness was an autonomous Royal Burgh and county seat for the county of Inverness (also known as Inverness Shire) until 1975 , when the municipal and county Burgh system was abolished. Under the Local Government (Scotland) Act 1973 , a two-tier local government, the Islands Council , was created. The Royal Burgh was defined as the urban area of ​​Inverness and included as one of the eight boroughs in the Highland region .

Another development occurred in 1996 under the Local Government (Scotland) Act 1994 , with which individual districts were dissolved and the region was merged into a unified municipal area: the Highland Council was created. The region is made up of eight counties, including Inverness. The Highland Council's original administrative divisions were abolished in 2007 in favor of three new administrative divisions. The council has defined large parts of the areas of Inverness, Nairn, Badenoch and Strathspey as Inverness city management area .

There are two parliamentary constituencies for Inverness:

Inverness is home to the soccer club Inverness Caledonian Thistle , which has played in the Scottish Championship since 2017 with a short break .

Inverness has partnerships with three cities: