The High Speed ​​Train , or HST for short , known under the brand name InterCity 125 , or IC 125 for short, is a British high-speed train . It consists of two diesel power cars and six to eight intermediate cars. Since 1976 it has been in service as the fastest diesel-powered train in the world; since 2006 he has shared this title with the German ICE TD . The train's top speed, 125 miles per hour (about 200 km / h ), was also the reason for choosing the name Intercity 125 . In contrast to other high-speed trains, the Intercity 125 had to be designed for traffic on the existing rail network, since its introduction did not go hand in hand with a completely new construction of routes. Since the privatization and break-up of British Rail , it has been operated by several railway companies. Despite its great age, it is still the backbone of the intercity service on non-electrified routes.

In the 1960s, competition from air traffic and motorways increased significantly, but new high-speed routes could not be financed. British Rail was therefore looking for ways to increase the speed on existing routes. To this end, two concepts were pursued: the Advanced Passenger Train , an ambitious concept with tilting technology that never got beyond the experimental stage, and the more conventional HST, which was optimized for the existing tracks and signal systems. In 1972 a prototype train was delivered, the obvious differences to the series train were the other front with buffers and the narrow front window with only one driver's seat. The scheduled operation of the series trains at 200 km / h started in October 1976. 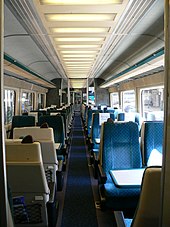 Older interior of an HST 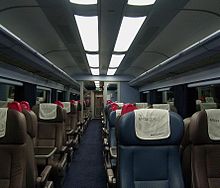 Modernized interior of an HST redesigned by First Great Western, carried out by Bombardier Derby

The HST is a classic multiple unit: It consists of two powered end cars and up to eight intermediate cars. The sets are not firmly coupled and are often exchanged for maintenance reasons. The entire train is air-conditioned and runs very smoothly thanks to its air-sprung bogies . The intermediate cars correspond to the Mark 3 series, but they have a different energy supply and can only be exchanged for the Mark 3 of the locomotive-hauled trains after conversion. The doors have no inner door handles, to get out the door window must be opened and the outer door handle operated. An automatic door lock was retrofitted later, but an automatic locking device is missing, the doors have to be closed by hand.

There were also test drives with eleven-part HST trains on the main lines, which were in high demand, but this test phase did not last long, as the entire HST maintenance systems were only geared towards the ten-part trains and maintenance was now significantly more complex; the BR shied away from adapting the relatively new systems.

Eight power cars were converted to normal buffers; in 1987 they were used as control cars in replacement sets for Mark 4 cars that were delivered late. After the privatization of BR, they came to Virgin Trains . Two of these were later passed on to the state-owned network company Network Rail , which now has its own complete HST for test drives and, if required , can attach additional measuring vehicles or similar test objects, such as locomotives , to the train. 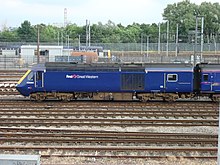 Modernized HST in use for National Express (2007)

Of the planned 161 HST units, only 95 were built. They were used on all major intercity routes: East Coast Main Line London-Edinburgh-Inverness / Aberdeen; London-Bristol-South Wales; London-Exeter-Plymouth-Penzance, as well as cross-country . The first major change came in 1988 with the electrification of the East Coast Main Line London-Edinburgh, since then the HSTs have only operated services that lead north beyond Edinburgh. The Midland Main Line London-Sheffield-Nottingham was added. After privatization, they were partly displaced on the cross-country and midland routes by the railcars of the Bombardier Voyager family , but were increasingly used in West England and South Wales. HST operators are currently First Great Western , East Coast , East Midlands Trains , CrossCountry , Virgin Trains and, in addition, Grand Central Railway is an open access operator.

Even after more than three decades, high-quality intercity traffic cannot be imagined without the HST. A direct successor is not in sight: The Bombardier- Voyager family (Class 220-222) and the Alstom Coradia (Class 180) turned out to be not economical enough, and the discussion about electrification of the main lines delayed the successor program HST2 and Intercity Express programs to date. This prompted some operators to thoroughly modernize their HST with new interior fittings and new machinery.

Since October 2018, Abellio ScotRail has been using 26 HST trains in intercity traffic between the seven Scottish cities of Aberdeen , Dundee , Edinburgh , Glasgow , Inverness , Perth and Stirling . The routes from Aberdeen to Inverness, for example, are one of the routes not yet used by HST. The sets have four to five intermediate cars, one of which is a first class car with a buffet. Before being used, they are thoroughly refurbished by the owner Angel Trains , including a new interior and new automatic doors. There is also enough space for wheelchairs and bicycles. Despite the shortening of the trains, both power cars are still required due to the steep gradients on the routes used, for example on the Highland Main Line and in the Queen Street Tunnel north of Glasgow Queen Street station . According to the contract concluded for their use between Angel Trains and Abellio Scotrail, the trains are to be used until 2030, i.e. beyond the term of the current Scotrail franchise. West of London, the HST will remain in service on the route from London to Cornwall until the mid-2020s. The HST will therefore be used in planned operation for over 50 years.

The XPT (E X press P assenger T rain) emerged in 1982 and sprang in its construction the British HST125 trains.

1980 ordered New South Wales Public Transport Commission initially 30 vehicles was planned a deployment with two power cars and 5 intermediate cars, the traction material presented in order of 4 units, in addition there was a reserve power car and a backup intermediate cars. The contract was valued at around $ 40 million and the vehicles were delivered between 1981 and 1982. At the beginning of the mission, the trains ran under the name "InterCityXPT" based on the British name "InterCity125". New power cars (5 units) and intermediate cars were built as early as 1984, the two-class system was also introduced and the trains ran increasingly from 1985 with 7 intermediate cars. After an eight-year break, new vehicles were built again from 1992 to supplement the existing material. A total of 19 power cars (each with an output of 2,000 hp, according to a repowering program 1999/2000) and 60 cars were put into service, the cars are divided into five sub-types: eight 1st class sleeping cars, nine 1st class seating cars, nine restaurant cars, 25 2nd class seating cars, nine 2nd class seating / luggage cars. The cars are also based on the British Mk III and weigh 40.1 tonnes empty (restaurant: 43.6 t; sleeping car: 48.3 t).

The inside of an XPT differs from that of an HST125, as the XPTs are not pure InterCity trains, but also fast night trains. The trains differ in detail from the HSTs, such as the greatly modified front end of the power cars. In addition, the XPT was only designed for a top speed of around 160 km / h, as suitable high-speed routes were not available; the acceleration is increased compared to the HST125 due to the shorter train length. During test drives in August 1981, 183 km / h were reached, with which the XPT was able to beat the Australian speed record for rail vehicles at the time.

The XPT units were used from 1982 on three different lines departing from Sydney , with the 500-kilometer route from Sydney to Kempsey the reduction in travel time compared to the previous offer with one hour and 46 minutes.