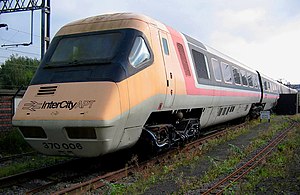 The British Advanced Passenger Trains were passenger trains of British Rail (BR), the high with the goal cruise speeds were developed. There are two subspecies to be distinguished: On the one hand there is the APT-E (E for experimental), which was operated with a gas turbine , and on the other hand the APT-P (P for prototype), which was driven electrically .

The basic idea behind the APT trains was to achieve significant time savings without high costs for new routes in order to remain competitive with the newly emerging aircraft even at distances of over 300 kilometers . The formulated time target compared to the existing connections was around 50%, for this the multiple units had to have a tilting system that allowed them to drive faster through curves with tight radii ; In addition, greatly improved braking systems were required in order to drive through the old routes at a higher speed without major adjustments to the signal system and still come to a standstill in good time. 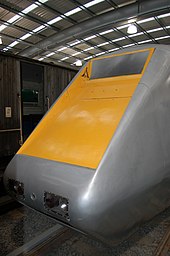 APT-E at the Shildon Railway Museum

Power end of the APT-E

In the 1960s, British Rail pursued a concept with the development of the High Speed ​​Train HST125, which made it possible to reach high speeds on existing, not always electrified routes with relatively conventional but adapted technology. In 1967, however, the decision was made to develop an even more modern vehicle and to bundle many new technologies in one go. The resulting first generation of the APT bears the suffix E for experimental .

In 1973, after some delays, the construction of a first unit was approved, which was presented to the public in 1975. On test drives, the vehicle reached a top speed of 150 mph and covered the 159-kilometer route between London and Leicester , originally designed for lower speeds, in under an hour. As early as 1976, the BR withdrew this test train from the routes; the train was not suitable for use in real passenger train service anyway, as the two intermediate cars and thus the capacity were out of proportion to the drive cars , but thanks to the first positive experience with the concept the further development as APT-P was decided.

The externally reconditioned APT-E can be viewed in the Shildon National Railroad Museum field office .

Control car of the APT-P 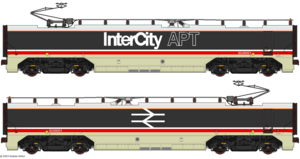 Motor vehicle of the APT-P

The APT-P was an electrical advancement, its conception was favored by the high oil prices and the low profitability of the gas turbines. The route London - Glasgow was selected as the route. According to the original plans, regular service was to begin in 1977 with four fourteen-part trains (2 control cars , 10 seated cars and 2 motor cars).

In order to be able to drive the speed of 240 km / h on the routes that were not designed for this purpose, in addition to the tilting technology, which was adopted from the APT-E, the braking system also had to be adapted. In addition to the magnetic rail brakes , which were new at the time , specially developed hydro-kinetic brakes with water turbines were installed, which enabled a braking distance of 1,830 meters from top speed to standstill.

A special feature of the APT-P is the sequence of the trains; it actually consists of two permanently interconnected units with centrally located drive cars, each of which APT-P had two. Although there was a possibility of passage through the motor vehicle, this was forbidden for passengers and so each part of the train had the same share of 1st and 2nd class seats as well as its own train restaurant . In addition, significantly more staff was required. Only a further development, which was planned but never built, was to have power cars at the ends of the train and thus be more economical. The step with the connected motor vehicles was necessary, because only one pantograph was allowed to be in contact with the poor, slack overhead line . However, a single power car would not have had enough power to cope with the steep incline at high speed and 13 railroad cars .

The planned start-up in 1977 was postponed due to technical problems; It was not until the end of 1979 that a train was available for a test run after it had been completed a year earlier, but was immediately derailed at 160 km / h. The third train was completed in the spring of 1980. The official line operation should begin first in May, then in October 1980; However, after start-up problems arose, the commissioning dragged on until December 7, 1981.

The first public train left Glasgow at 7:00 am, reached a top speed of around 150 mph and took around 4¼ hours to get to London, with some passengers reportedly complaining of nausea. On the following day of operation, tilting technology jerked 6 wagons of the train out of the incline, which led to destroyed dishes in the restaurant of the train section concerned. On the third day of operation, the brakes of an APT-P blocked , another train had to interrupt its journey in Crewe due to heavy snowfall. The scheduled use of APT-P trains ended three days after it began. The fourth train that was ordered was never built, the remaining three trains continued to make test runs for new components until the summer of 1986 and were partly held as a reserve for some intercity lines; a return to scheduled service was no longer planned.

Whereabouts of the trains