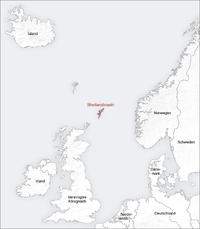 Shetland Bus is the name of a connection route from the German- occupied Norway to the Shetland Islands during the Second World War . Initially hardly organized and operated by the locals with fishing boats, these have been supported over time by the Norwegian government in exile and the Royal Navy .

When the Germans became aware of the route and there were several losses, the US Navy made three converted submarine fighters available from October 1943, with which refugees and weapons and material were transported to Norway.

In 1940 around 600 Norwegians fled to the Shetland Islands in fishing boats. After regular trips back and forth in 1941, 373 refugees were rescued by 1945, 383 tons of military equipment were brought to the Norwegian resistance fighters, as well as 192 agents of the Allies who were smuggled into Norway via this route.

After the occupation of Norway during World War II in April / May 1940 ( company Weserübungen ), a movement of refugees was established that was initially not organized in a uniform manner. The Shetland Islands were the preferred escape destination (alongside the overland escape into neutral Sweden ). In Norway, the term Shetland Bus has become established for this. Local resistance groups initially organized fishing boats , the owners of which either drove with them or which were simply stolen in places.

The boats that had previously arrived with refugees on the Shetland Islands were used, as they were not noticed when they surfaced again in Norwegian waters. The trips had to be carried out in the dark and therefore took place mainly in winter, as it was safer there not to be seen for the entire trip. However, this also meant driving across the sea in the worst possible sea conditions at the time of severe winter storms.

The Shetland Islands themselves were massively expanded militarily during this time. After the invasion of Norway, the Shetland Islands were a possible base for an invasion of the British Isles: the British army transferred troops to the island, brought artillery and anti-aircraft guns with them, and the Royal Air Force built two runways at Sumburgh and Scatsta ( Scatsta Airport ). Up to 20,000 British soldiers were in Lerwick , Scalloway , Sumburgh and Sullom Voe , which meant that the islands had significantly more soldiers than locals. The Shetland Islands were only militarily attacked in November 1939 in a German air raid that missed its target - fortunately for the Shetlanders, among other things, three fishing boats loaded with depth charges were lying in the port of Lerwick.

The onslaught of the Norwegians on the island posed some problems for the residents there, as they were not prepared for so many refugees. Eventually it was possible to set up an emergency camp in the huts of the herring girls of James Sutherland's herring company and to temporarily accommodate the Norwegians. The Shetlanders themselves were hospitable and compassionate, as evidenced by a letter from the Norwegian government-in-exile from 1944:

The excellent reception which has been given the refugees at Shetland has been indicated by every newcomer who has passed through Shetland. They have met with kindness and understanding by everyone they have been in contact with and for this we are very grateful.

With increasing organization with the participation of the Norwegian government in exile and the Royal Navy , there were more and more (almost) regular trips. On the British side, the secret service Special Operations Executive organized the actions. A permanent crew, the so-called Shetland Gang , quickly formed, consisting mainly of escaped Norwegians who wanted to help their country. The best-known of them, Leif Andreas Larsen or Shetland Larsen , made a total of 52 trips after his own escape. Although Norwegian, he was a highly decorated soldier in the Royal Navy. Since the autumn of 1940 the Shetland-Norway drivers were officially part of the British Navy, and since the summer of 1942 an independent Norwegian naval unit under Norwegian command . At times they had 14 fishing boats. When the Germans began to hunt down the Shetland buses , the drivers lost seven ships to the German navy , three remained missing, whether sunk by Germans or sunk in bad weather is unclear. When the losses got too high, they stopped the trip looking for suitable vehicles.

In the early days, the trips started directly from the harbor in Lerwick , where most of the escape boats also landed. There the boats were immediately noticeable due to their significantly different design. But since no movement went undetected in Lerwick , one was forced to find an unobserved place. This was found in Lunna in the summer of 1941 , far from any inhabited settlement, in the northern part of Mainland . In Lunna House , a large country house built in 1660, was the new headquarters of the Shetland gear. It is located on an isthmus with good anchorage both east and west of the isthmus.

Lunna was optimal in terms of secrecy. Because of the remoteness, however, the lack of infrastructure was increasingly a problem. B. in the supply of spare parts or the repair of boats, which often came back from Norway rather damaged by shelling or storms. In addition, the base could not be kept completely secret; Due to the isolation and the distance from the other British troops, it would have been defenseless in the event of a surprising German sea or air attack.

So there was another move to Scalloway not far from Lerwick in early 1942 . Only the local population and refugee Norwegians lived in Nissen huts , which surprisingly turned out to be very secretive. The team built a slipway that was large enough to accommodate the Norwegian fishing boats. This slipway is still in operation today.

Upon arrival, all Norwegian refugees were forwarded to the County Hotel in London , where they were registered and checked in order to reduce the risk of German spies being smuggled in.

While the journeys went unnoticed by the Germans in the beginning, they finally discovered the escape route and successfully attacked several fishing boats, sank them or took the crew members prisoner. Between autumn 1942 and 1944 the German navy sank seven ships, killing 33 men.

Most serious, however, was what happened in the Norwegian coastal town of Telavåg . There, on April 26, 1942, the SS tried to take the two resistance fighters Arne Vaerum and Emil G. Hvaal with them. Both had trained in Scotland and were dropped off on the Shetland Bus near Telavåg earlier this month. Vaerum, the German secret service chief Hauptsturmführer Gerhard Berns from Bergen and his deputy Untersturmführer Henry Bertram were shot dead. As an act of revenge, SS units landed in the village, abducted the women of the village to Norwegian camps, the men to Sachsenhausen concentration camp, and blew up and burned all of the houses.

From October 1943: The US Navy provides submarine fighters

The Hitra is now a museum ship

Admiral Chester W. Nimitz , who feared for the valuable information about the Germans in Norway that was transported by bus, was able to convince Franklin Roosevelt to put the three converted submarine fighters Hessa , Hitra and Vigra under Norwegian command from autumn 1943 deliver. They arrived in Scotland in August 1943, were converted to meet requirements and set out on their first journey on October 26, 1943. After that, there were no more losses at sea, as the ships were fast enough to escape the German Navy and armed enough to keep planes at bay. Only one incident occurred in the 114 trips made by these ships: a Canadian plane accidentally opened fire on the Hessa . With the Hitra , Ingvald Eidsheim was able to set the speed record for the Shetland bus: 25 hours from Scalloway to Norway and back.

Monument to the Shetland Bus in Scalloway, Shetland

The first Norwegian book publications come from Sigurd Evensmo : "Englandsfarere" (1945) - English: "A Boat for England" (1947) (filmed in 1946). David Howarth published the first English original title The Shetland Bus in 1951 and We Die Alone in 1955 , which tells the story from the point of view of the Norwegian resistance fighter Jan Baalstud (Norwegian: "Nordsjøbussen" (filmed in 1954) or: "Ni liv" (filmed in 1957) ). From the books came the 1956 film Suicide Mission by Michael Forlong in the USA , in which several members of the Shetland Gang play themselves.

Colin Nicol, a history teacher at Scalloway Junior High School, began further and more detailed research on the subject in the late 1990s. He received support from numerous agencies, including the Shetland Museum , the Scalloway Museum, the Imperial War Museum , the Norwegian Resistance Museum and the Nordsjøfart Museet . The latter in particular has a larger exhibition on the subject. Among other things, this resulted in the Shetland Bus website, which collects extensive interview audios from those involved at the time.

The museum in Scalloway is also dedicated to the Shetland Bus.