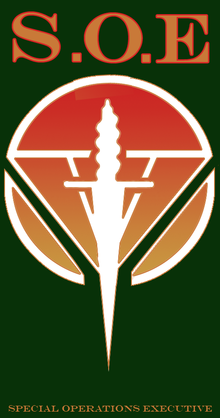 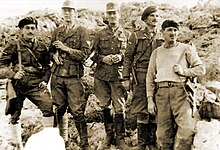 SOE command for the kidnapping of General Heinrich Kreipe , 1944

The Special Operations Executive ( German  special task force ) was a British intelligence service special unit during the Second World War . It was founded in mid-July 1940 under the code name Inter Services Research Bureau on the orders of Prime Minister Winston Churchill for subversive warfare without direct military involvement, modeled on the actions of the IRA . Officially, she was subordinate to the Minister of Economic Warfare ( Minister of Economic Warfare ) Hugh Dalton .

The SOE emerged from the amalgamation of three different already existing and secretly operating departments of other ministries: the Department EH of the Foreign Office ( Foreign Office ), Department MI R of the War Office ( War Office ) and Section D of MI6 . The tasks of the special unit SOE consisted in acts of sabotage behind the enemy lines as well as in the support and supply of local resistance groups in the countries occupied by the Germans. The SOE has also been referred to as The Baker Street Irregulars , alluding to its headquarters at 64 Baker Street in London and the fictional group of spies in Sherlock Holmes novels. Churchill himself commissioned the SOE to “set Europe on fire”, but in the course of the war operations took place around the world - sometimes with, sometimes without success. The SOE was officially dissolved in 1946, and the experience and techniques gained were taken over by the Secret Intelligence Service (SIS), better known as MI6 .

Formally subordinate to the Minister for Economic Warfare only, the SOE was responsible to the entire War Cabinet . Initially, the special unit was headed by Frank Nelson, an entrepreneur in civilian life, followed by the banker Charles Hambro in February 1942 and, from September 1943, Colonel Colin Gubbins .

Depending on the area of ​​operation, there were different sections for planning and carrying out the operations. For actions in France alone, several sections emerged during the war, especially the F section under British command, the RF section under the command of General Charles de Gaulle's Free France ( France libre ) and the EU / P section of Polish emigrants. In addition, there was the DF section, which was responsible for the escape routes of allied soldiers who were shot down or who had escaped from custody. Head of Section F was Maurice Buckmaster . His assistant Vera Atkins was so much "the soul" of the SOE that some suspected she was running the organization herself.

The focus of operations, measured by the number of SOE agents involved, was France and Yugoslavia, but also Norway (1943 attack on the heavy water factory in Rjukan ), Czechoslovakia ( attack on Heydrich in 1942), Poland, Southeastern Europe, Burma, Malaysia and China.

The SOE failed spectacularly in the Netherlands in 1942 after the German military intelligence service, the “Amt foreign / Abwehr”, intervened undetected in the SOE radio traffic in the so-called England game. In Norway, the SOE operated the Shetland Bus , a sea connection that brought agents and weapons to Norway and removed the persecuted.

For many years after the war and the dissolution of the unit, the existence of the SOE remained hidden from the public (similar to Aktion Ultra , the operations of the codebreakers at Bletchley Park ).

In 1943, the SOE was in contact with the Austrian resistance group Maier-Messner-Caldonazzi through its employee GER Gedye , but was not convinced of the reliability of the contact person (an employee of Franz Josef Messner ) and did not agree to any cooperation due to security concerns. In fact, the middleman Franz Josef Riediger was a double agent who worked for the German defense . 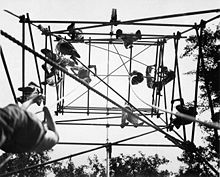 The recruitment of potential SOE agents was not only unsystematic - members of the Foreign Ministry, the War Ministry, the armed forces and the intelligence service "MI 6" were asked to look discreetly among their friends for suitable persons - but also against the iron rule of the traditional Intelligence services "MI 5" and "MI 6" to recruit British citizens only. Because the prerequisite for SOE participation was perfect knowledge of the language of the country of assignment, so that foreigners also had to be used. A total of about 6,000 people were recruited, and just under 500 were British.

The future SOE agents had to go through a three-step training course: Basic training at the SOE training center in Wanborough Manor, Guildford consisted of fitness training , training on handguns and map reading . They learned combat technology on the Scottish west coast in Arisaig : handling time fuses , plastic explosives and incendiary bombs , the targeted use of domestic and foreign firearms as well as methods of silent killing. Each candidate also had to do at least five parachute jumps , first from a balloon, then from an airplane. The third phase of training consisted of preparing for inconspicuous immersion in an occupied country. A new identity was invented for everyone , with a fictional résumé and forged papers that had to be memorized and internalized in such a way that they could be lived out in action. In addition, it was taught how to shake off persecutors and that in the event of arrest by the Gestapo, mental and physical torture should be endured for at least 48 hours in order to enable colleagues who were still at liberty to escape.

In Valençay in the Indre since May 6 1991, a memorial to the 50th anniversary of the parachute landing reminiscent of the first agents of the F -Sektion in France. Georges Bégué (1911–1993) quickly took up radio contact with London after his arrival and then accompanied the landing of other agents. Between Bégué's first jump and the liberation of Paris in August 1944, more than 400 agents from the F section were dispatched to France, which was occupied by Nazi Germany. They were active in various functions, for example as instructors for weapons and sabotage, couriers, organizers, liaison officers and radio operators. The “ Roll of Honor ” of the Valençay memorial lists the names of 91 men and the 13 women who lost their lives as SOE members.

Welbike with a generator to operate two-way radios

In addition to conventional equipment and weapons, the SOE used a large number of materials specially manufactured for special operations. At The Firs , a mansion in Whitchurch, north of Aylesbury , and at The Frythe , a former hotel in Welwyn Garden City that was named Station IX , creative scientists invented novel devices, including handheld radios like the Sweetheart , and explosive projectiles with time fuses, such as time pencil , as small as a writing pen, and L delay , which remained functional even in extreme cold.

The engineers in Station IX also developed low-noise handguns such as Welrod and puppies as well as the foldable miniature motorcycle Welbike, which can be used by parachutists , and the miniature diving vehicles Welman and Sleeping Beauty . Even in wartime practice, anti-personnel mines were constructed that looked like horse manure or dead rats. The “tailors” were housed in the London townhouse “Queens Gate 56”. Using original clothing that refugees had brought with them from the continent, they made suits, dresses, shirts, underwear and nightwear for the SOE agents' missions abroad so that they would not differ from the locals in hostile countries.

The novels The Marionette by Larry Collins (1985), Night of the Foxes by Jack Higgins (1986) and The Leopardess by Ken Follett (2001) and Les Derniers Jours de nos Pères by Joël Dicker (2013) deal with the subject of SOE.

Intelligence services of the United Kingdom