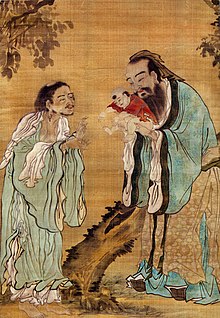 The three great teachings of China , which complement each other, are understood under the three teachings . The teachings are Confucianism , Daoism and Buddhism .

A Chinese official was, of course, a Confucian when he was in office. If he valued life-prolonging measures, he was a Daoist, and if someone in the family died, he consulted a Buddhist monk, since the Buddhists had the best contact with the hereafter. This attitude is reflected in the sentence of a Chinese emperor of the Ming dynasty : "The three teachings are one." ( Chinese  三 教 一。 , Pinyin Sānjiào yī. ) However, this is also to be understood from the background that in the Ming -Time these three teachings should be organized as Orthodox teachings with the emperor at their head, excluding groups other than heterodox and dangerous.

In addition, the three teachings in China have mutually influenced, fertilized and complemented each other (see also: Syncretism ) . So the Chan -Buddhismus (see also: Japanese Zen ) emerged from the discussion of Daoism and Buddhism. The religious speculations of Neoconfucianism adopted ideas from Buddhism and Daoism. Daoism even developed a school whose aim was to unite the three teachings: the school of perfect reality, Quanzhen .

Sometimes they are described as a (supposedly) unified religion under the name Chinese Universism , which was coined by the sinologist Jan Jakob Maria de Groot . In the German area, it was Helmuth von Glasenapp who coined the term with his work The 5 World Religions and who in his work offers a complex overview of peculiarities and differences.