Depiction of a bagua by Zhu Xi

The terms that play a role in the various neo-Confucian philosophers and are explained below were all already present in older Chinese philosophy , but were given a new weighting and interpretation in neo-Confucianism.

A clear characteristic of early Neoconfucianism is a special cosmological interest in which the proximity to Daoism shows. The first representative of this direction was the scholar Zhou Dunyi (1017-1073), who is occasionally seen as the "founder" of Neoconfucianism. Forerunners of Neo-Confucianism, which were tied back to in the Song era, can already be found in the earlier Han era , in which the so-called New Text School had already represented a Confucianism that included the religious. This Hanzeit system of thought is mainly related to Dong Zhongshu (179-104). The famous scholar Han Yu was a forerunner of Neoconfucianism from the Tang Period .

The core of Zhou Dunyi's teaching was a Taoist diagram that he had received from a priest. In an explanatory text on the diagram, he emphasizes that the limitless ( Wuji ) is at the same time the highest limit ( Taiji ) and creates Yin and Yang through movement and rest . The Saint choose the state of rest, a state of no desire, and make it the highest principle, thereby setting the highest standard for humanity. The influences of Daoism and Buddhism can be recognized in the concept of limitlessness and the echo of nonbeing and calm. The reason why the neo-Confucian teachings are assigned to Confucianism, despite their proximity to these religions , is that the representatives of this direction referred to classical Confucian scriptures in their argumentation , with particular emphasis on Yijing and its commentaries.

The second early Neo-Confucian philosopher, Shao Yong (1011-1077), dealt with cosmological questions, in particular with numerological speculations about the structure of the cosmos, which later also played a major role in Daoist fortune-telling . In doing so, he changed the earlier speculations significantly and gave them a larger dimension.

The transition from a cosmologically oriented to an ontologically oriented philosophy is represented by Zhang Zai (1020-1077). He emerged with a philosophical system that can be categorized as " materialistic thinking ". His basic concept is Qi , which has an all-encompassing status as a kind of ethereal substance . With Zhang Zai the notion of non-being disappears (cf. Shunyata , Nirvana ) and he connected the Qi with all those terms that had previously denoted the highest transcendent or immanent reality, namely Dao , Taiji and Taixu ("great emptiness" ). For Zhang Zai, the universe represents an unalterable being, but existing in two aggregate states, the highest emptiness as formlessness and the resulting formed world. With this assumption, Zhang Zai negated non-existence, but placed man in a comprehensive context with the rest of the cosmos, with which he is inseparably connected according to this teaching.

The later Neoconfucianism and Zhu Xi

In the next generation of Neo-Confucians, the brothers Cheng Hao (1032-1085) and Cheng Yi (1033-1107) emerged, who established the concept of Li (“principle of order”) as the most important concept of this teaching. Li was understood as a cosmological and ontological, as well as a moral principle . It forms the essential basis of being, but also the structural order of individual being. Another important term in relation to neo-Confucian ethics is for Cheng Hao the humanity ( ren ) already valued by Confucius , but which in Cheng has the connotation of love and represents a quality that unites all beings. For Cheng Yi, human nature in the sense of Mengzi as a product of Li is unreservedly good, but the “etheric matter” ( Qi ) has an indifferent character and is therefore responsible for imperfections that produce “evil”, since it is the “material ”Or the“ qualification ”( cai ) of which the individual man consists. With this differentiation, Cheng Yi's idea of ​​self-cultivation and upbringing, which Cheng Hao developed based on trust in all-unifying love, got a different accent. Cheng Yi focuses on jing, (literally "awe"), the attentiveness or taking seriously of completely different things and beings.

The term "exploration of things" mentioned by Cheng Yi comes from a chapter in the ritual classic Liji . Together with another chapter of the Liji, The Great Learning ( 大學  /  大学 , dàxué ) and Middle and Measure (Zhong Yong) together with the Book Mengzi and the “Conversations of Confucius” ( Lunyu ) formed the “ Four Canonical Books ” (Si Shu) of Confucianism.

Within the neo-Confucian movement, there was soon a differentiation between two directions, one of which is often referred to as rationalistic and the other as intuitive .

The most important representative of the rationalist direction ( 理學  /  理学 , Lĭxué  - "doctrine of principle") was Zhu Xi (1130–1200) with the " Cheng Zhu school " ( 程朱 [理] 學  /  程朱 [理] 学) , Chéng-Zhū [lĭ] xué ). Zhu Xi carried out the final detachment of the ordering principle (Li) from the etheric matter (Qi) and gave it a metaphysical meaning, since he saw the ordering principle as "above the level of design" (cf. Platonic idea ) and the highest, Taiji , as the all-encompassing Li looked at. Zhu Xi's idea of ​​the eternal and all-encompassing principle of order is held to be partly responsible for a shift in emphasis in Chinese culture, which resulted in a slowdown in the development of Chinese society.

However, the idealistic Xinxue direction ( 心 學  /  心 学 , Xīnxué  - "teaching of the heart") of Neoconfucianism criticized Zhu Xi's dualism and was directed against the division of the "mind-consciousness" ( xin , literally heart, but also mind). The most prominent representative of this direction is Lu Jiuyuan (1139–1193). He represented a belief in the combination of time and space in the individual heart or mind-consciousness ( xin ) through which the individual participates in the whole, the cosmic unity.

Neoconfucianism in the Ming Dynasty 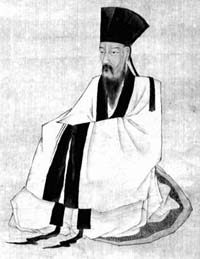 During the Ming period , neoconfucianism was the dominant state ideology , which continued into the Qing period . At the time of the Ming, the idealistic tendency gained the upper hand and the most important representative at this time is the scholar and politician Wang Shouren (1472–1529, known as Wang Yangming) with the "Lu-Wang School" ( Chinese  陸 王 [心])學  /  陆 王 [心] 学 , Pinyin Lù-Wáng [xīn] xué ). Wang identified both the “being” ( xing ) and the “heart” ( xin ) with the principle of order ( li ) and adopted the concept of “humanity” ( ren ) as love that unites all things and beings. Wang emphasizes that only the knowledge of the human being gives shape to the outside world, and that “innate knowledge” ( liang zhi , literally: good knowledge) inevitably leads to good action. Wang Yangming had enjoyed a Buddhist-influenced education and in Chan - meditation practiced so that his philosophy shows strong influences that direction.

In the succession of Wang Shouren, the most diverse schools of thought and schools emerged (see Seven Schools of the Wang Yangming Teaching ), all of which traced their origins back to Wang's philosophy. One can roughly grasp three directions, the first of which can be assigned to the realistic school, and which tried to keep the balance in terms of self-cultivation and obligations towards the state and society, the second of which was strongly inclined towards Chan and in the end almost absorbed into it. The most important exponent of this second direction, the Longxi School, Wang Ji , assumed that the three teachings were one and the same. The third direction, the Taizhou school, had prominent representatives in Wang Gen (1483–1540), its founder, and later Li Zhi (1527–1602), who attacked traditionalist Confucianism and preached an uninhibited naturalism , egalitarianism , subjectivism and spontaneity .

Manchu Period and the Decline of Confucianism

In the period that followed, however, the neo-Confucian philosophers increasingly turned to the roots of their philosophy and relativized the idealistic view. Representatives of these increasingly materialistic directions were Huang Zongxi , Wang Fuzhi and Gu Yanwu (1613–1682). In the latter's work, this turn to earlier trends reveals a new phenomenon, namely the emergence of a scientific approach. Gu dealt with topics such as epigraphy , phonetics , historical geography , but also with real-life topics such as the opening of mines and the development of private banks. It became apparent that he was applying a new, inductive method, the most important term of which was kaozheng , the proof. As a result, hermeneutics was replaced by textual criticism , a new important branch of Chinese scholarship in the 18th and 19th centuries. This textual criticism rediscovered the Han period Confucianism and a new school, the Han School, emerged, which for three centuries competed with the Zhu Xi-oriented Song School.

At the turn of the 19th and 20th centuries, the transition from Confucianism to a kind of anti-Confucianism took place within a little over a decade. One of the last representatives of traditional Chinese philosophy, which ended with him, as it were, was Kang Youwei (1858–1927), who tried unsuccessfully to establish Confucianism as the state religion.

In Korea , which imported Confucianism very early, Yi Hwang (1501–70) and Yi I (1536–84) are particularly noteworthy, who studied and further developed the teachings of Chinese Neo-Confucianism. In the period that followed, different schools developed in Korea, some of which fought heavily, which also had an impact on domestic political developments.

Neoconfucianism also played a role in what is now Vietnam , but there is still little scientific literature on this.