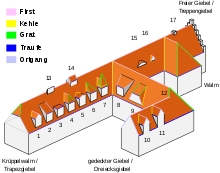 Designations on the roof: a larger cross gable with a hatch at the front and a smaller hipped approach at the back

The right-angled meeting of two roof ridges is referred to as cross gable or cross ridge , at the same ridge as the point of incidence , in the broader sense also for other roof surfaces . The term is used both for + -shaped on both sides ( dwarf gable , transverse gable) and T-shaped one-sided approach (gable triangle) . The cross gable always results in gable walls standing at right angles to one another , on a building in the form of a hatch or in the form of two tracts or wings , therefore one speaks of cross gable only with saddle roofs .

The roof design with crossed gable is a good design for free-standing houses as well as corner houses in urban areas ( gable- independent on two streets). At churches (then called Kreuzkirche ) or representative buildings, the cross gable is often raised with a roof turret , here the boundaries to the crossing tower are fluid. A close to the dome is also possible. On square floor plans, the cross gable also leads to two (or more) adjoining gable facades without eaves (which also saves the gutter , but requires strong downpipes).