View through the nave

View into the aisle

View from the transept onto the gallery

The Notre-Dame cathedral of Noyon in northern France Oise ( Region Hauts-de-France ) is Our Lady so the Virgin Mary ( French Notre Dame ) ordained and was a in 1148 by Baudouin II. ( Baudouin II ), Bishop The initiative taken by Noyon was erected between about 1157 and about 1221. Together with the cathedrals of Sens and Laon, it is one of the first Gothic sacred buildings and can therefore be assigned to the early Gothic . Its architectural history, like that of various other early Gothic cathedrals, is not sufficiently clear. Nevertheless, it was included in the list of Monuments historiques as early as 1840 .

Without the erection of the facade towers, the construction of the cathedral took more than 60 years. The decision to build a new cathedral on the site of the Carolingian predecessor building, which had partially burned down in 1131, was made in 1148, a few years after the consecration of the new choir of the abbey church of St. Denis (1144), for which rib vaults had been realized for the first time . When work began in Noyon, the construction of the choir of Sens Cathedral had been making progress for years. As in Sens and many subsequent French cathedrals, the choir (approx. 1157–1164 / 67) was built in front of the nave (from approx. 1160–1185) and the transept (southern 1170–1180). With the two narthex yokes and the west facade (1185–1221), the church building was completed, apart from the two facade towers. The south tower was completed in 1231, the north tower at the beginning of the 14th century. The northern side chapels also date from the 14th century, the southern chapels were added in the 15th and 16th centuries.

The cathedral and its furnishings have suffered from various events over the centuries. After a fire in the roof structure that damaged the six-part vaults in 1293, these were replaced by four-part vaults. In 1450 the two east towers were torn down to the lower level, in 1462 the vault of the crossing fell down and was renewed. A restoration campaign (17th century) introduced new decorative elements. The statues of the westwork and the furniture fell victim to the destruction campaigns of the French Revolution (1790–1793). The cathedral stood empty for years and was for sale as “national property”, but found no buyer and was used again for worship in 1799, before the Concordat . The building suffered in particular from the effects of the First World War (1914–1918). After a bombing on April 1, 1918, the collapse of the burning roof structure from the 14th century tore vaults and parts of the upper wall areas with it. What was left of the windows was almost completely lost. The restoration work carried out between 1918 and 1938 was able to save the structure of the cathedral and restore it to its original state as much as possible.

The length of the cathedral inside is 103 m; the vaults rise to a top height of 23 m; the facade towers are 62 m high.

This three-aisled gallery basilica was built on an east -facing cross - shaped floor plan . The transept ends in rounded apse shapes ; in this way there are references to the Rhineland three-conch choirs . The choir is surrounded by an outpatient clinic and a ring of five radial chapels .

Noyon is one of the few early Gothic cathedrals whose double tower facade (1185–1221 / 31) was completed. This form of the facade accompanied by two towers was nothing new. It was present in the Norman Romanesque and also, for example, at the Notre-Dame la Grande in Poitiers and at the Cathedral of Angoulême . Abbot Suger picked them up for the Abbey Church of St. Denis (facade 1137–1140). It must also be emphasized that the facade of Notre-Dame de Noyon, like that of many other French cathedrals, was last built and the north tower was only completed at the beginning of the 14th century.

Compared to St. Denis, this facade does not represent a further development, on the contrary. The lively design of St-Denis has been taken back - the floor plan is again consistently linear, there is no emphasis on a central area, no dynamic movement. New developments in art are not always accepted by everyone. There is also always a tendency to cling to older forms. A real further development of the facade will only take place again in Laon 1160.

But the facade of Notre-Dame in Paris 1200 is more conservative again. There are both “progressive” and “reactionary” cathedrals.

The east choir of Noyon is almost completely preserved. It offers an unadulterated picture of what an early Gothic choir with ambulatory and chapel wreath looked like from the outside. Just like in St-Denis, the buttresses stand between the chapels so that they also form their dividing wall.

A buttress as such already occurs in early Christian architecture, for example above the side aisles of Hagia Sophia . The buttress as a special structural feature of the Gothic was only developed in Paris after 1160 and was then adopted for the construction of other Gothic cathedrals. But even older churches were later provided with a buttress. One such case is Noyon. If you look closely you can see that the lower part of the buttresses appears older than the upper part, which was later placed on top.

The Gothic architecture is commonly associated with the three key concepts of pointed arches , buttresses and ribbed vaults. But the Gothic cannot be explained in purely structural terms. These three typical construction elements are not the reason but the consequence of the Gothic idea. That is the double aspect of the Gothic language of form. A structural means such as the pointed arch or the ribbed vault is known already in the Romanesque, but is not yet used to change style. Then comes a new idea that deals with these found techniques differently, but the implementation of which again depends on further technical developments. The Gothic light mysticism, for example, could not have been implemented in this way if the tracery had not been invented in Reims in 1215 . But the intention to have such large windows was there beforehand. On the windows of the east choir of Noyon, the pointed arch is not yet clearly visible, rather hinted at. In principle, these windows hardly differ from their purely Romanesque predecessors. 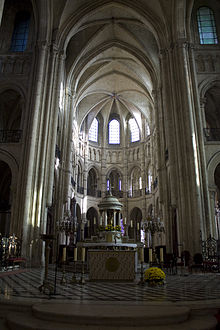 View of the choir room 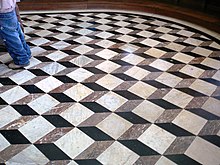 Detail: floor in the choir room 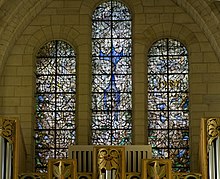 Window design in the westwork

Noyon introduced the four-part wall elevation between 1150 and 1185. When this four-story elevation (Noyon, Laon, Paris, Soissons, etc.) was introduced, the churches in Flanders and Hainaut (Tournai: nave, from 1135/40; Bruges, St. Donatus, around 1130) were the inspiration, which in turn were probably influenced by West English recordings (Nussbaum, Norbert: Deutsche Kirchenbaukunst der Gotik. Development and construction forms. Cologne 1985).

This four-zone wall elevation is not a final stage of development, but a historical intermediate stage. In Chartres , the three-part elevation was used again from 1195, which then remained exemplary for the entire classical Gothic.

In Noyon there is a gallery above the arcade floor and only then the triforium and the window arcades . Panofsky speaks of the “first real triforium” (Panosky, p. 47).

This innovation is a mighty step on the way, the tendency of the Gothic to dissolve or split up the wall , so that a second layer of space is created behind the central nave wall . The gallery also has the function of absorbing the vaulting. The buttress walls were "hidden" in it and to this extent this architecture is still seen in some literature as an offshoot of the Romanesque, while the Gothic is only seen from around 1200.

The support system has become more complicated. The splitting of the wall opens up previously unknown design possibilities, which find their first climax here in Noyon (Binding, p. 160). Here, a room is no longer bounded by a wall, here one can sense a space shell behind the visible surface of the wall, which allows the front wall to emerge like a picture carrier.

The wall of the central nave has a graceful skeleton system - that has nothing to do with the simple, massive wall of the Romanesque period . Here in Noyon you can see how largely the plastic loosening of the wall has already gone and what enlivening effect it has.

In another respect, Noyon takes the development of St-Denis back again - in the chapels wreath of the choir: there are again continuous walls between the chapels. This is structurally more reliable, but less elegant and less full of light. In the wall elevation, Noyon goes a clear step beyond St-Denis and Sens, but in the facade design and in the layout of the choir it lags behind its predecessors.

Here the wall system is designed differently. The upper two storeys of windows are arranged over a triforium. This change had to be made because the south transept is semicircular and has no aisle. Therefore, the gallery of the nave could not be continued here, because a gallery naturally always needs a side aisle as a basement on which it can sit. This is how this original and extremely rare solution was found.

The Noyon choir is the older component compared to the nave and accordingly it also shows the older designs. It is based on St-Denis, insofar as 12 columns corresponding to the 12 apostles carry the choir vaults.

Under the arcade of light of the choir is a faded triforium. When comparing the two triforium zones of the younger nave on the one hand and the older choir on the other hand, the difference becomes immediately clear: in the nave a real triforium as a walkway in the wall, in the choir the preform, a row of arches that is simply faded in.

So here in Noyon we have all the stages of development of the subject of 'splitting the wall' in front of us: the faded-in triforium, the real triforium, the gallery and thus the four-part wall elevation. This arsenal is now being used in architecture.

The gallery has of course completely different dimensions than the triforium. Several people can also gather here. In the oriental and Byzantine churches such galleries were intended for women, in the monastery churches of the Western European Middle Ages mostly for nuns, hence also called nuns' galleries.

But galleries were also built in the churches for the emperor and the princes. In the Baroque period, entire galleries developed from this, which could also be glazed for themselves, so that the nobles were completely isolated. It then looked like a winter garden.

Where the ribs of the gallery vaults come together, human heads have been placed in Noyon, as well as between two rising ribs. In the Middle Ages, faces, grimaces and other more or less macabre images were attached to all possible places, the meaning of which cannot always be precisely analyzed.

Of the numerous and largely listed items of equipment, the main altar, the wrought-iron choir screen , a Gothic capital reworked into a baptismal font and a monumental group of figures showing the rehabilitation of Joan of Arc are particularly noteworthy .

The organ was built in 1898 by the organ builder Joseph Merklin and was initially in the Sacré-Coeur church in Agen. The instrument was completely redesigned and finally inaugurated in the cathedral in 2005. It has 47 stops on three manuals and a pedal . The playing and stop actions are mechanical.