Karl Bryullov (dt too. Brüllow , Russ. Карл Павлович Брюллов; born December 12, jul. / 23. December  1799 greg. In St. Petersburg ; † June 11 jul. / 23. June  1852 greg. In Manziana ) was a Russian painter and architect . He mainly painted portraits , monumental paintings, but also genre paintings and watercolors . He was the first Russian painter to receive international recognition. He is considered a key figure in the transition from Russian classicism to romanticism .

Karl Brjullow was born to Pawel Brulleau, a Russian of French descent, who in turn was the great-grandson of a French named George Brulleau, who emigrated to Russia in the 18th century, and of Maria Ivanovna Schroeder, a Russian-German . From 1809 to 1821 he received training at the Petersburg Art Academy . He was tutored by Andrei Ivanovich Ivanov , among others . There he was awarded a gold medal in the history painting category.

After completing his studies, he was sent to Italy in 1822 with funds from the Society for the Promotion of Artists . In 1823 he went to Rome with his brother , where he was given the imperial commission to copy Raphael's School of Athens in the size of the original (now in the academic collection).

He also visited Dresden and Munich before settling in Rome. The genre paintings Italian Morning (Итальянское утро) were created here in 1823 and Italian Noon (Итальянский полдень) four years later. In the period from 1827 to 1833 he worked on a monumental painting with a historical subject , which was to become his most famous work - The Last Day of Pompeii (Последний день Помпеи). According to the description of the younger Pliny, a painting was created which was distinguished by its beautiful character drawing and lively coloring ( Hermitage in Petersburg). Coloristically as well as by the unsolicited emphasis on the purely human, this work was outdone by its following (1834), the murder of Inês de Castro (in the collections of the Petersburg Art Academy ). 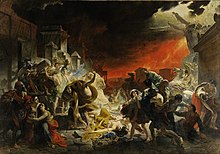 The painting The Last Day of Pompeii has been compared to the best works of Peter Paul Rubens and Anthonis van Dyck and made Brjullow one of the most important European painters.

After completing this painting, Brjullow traveled back to Russia via Greece , Turkey and Palestine . Numerous landscape paintings were created on this trip. In Russia he took on an important role in the St. Petersburg Academy of Art, where he taught from 1836 to 1848 together with Fyodor Antonowitsch Bruni . During this time the paintings The Siege of Pskov (Осада Пскова - 1839 to 1843; unfinished), St. Isaac's Cathedral (Исаакиевский собор; 1843–1847), portrayed contemporaries and drew a self-portrait (Автопортретрет).

He was a patron of Taras Shevchenko , who was an admirer of his and who, with Bryullov's help, was able to buy himself out of his serfdom in 1838.

A large number of his works are now in the possession of the Hermitage and the Petersburg Art Academy. These are primarily portraits and genre images. In addition, he created the painting of the Ascension of Christ for the Kazan Cathedral in Saint Petersburg and he painted the dome of St. Isaac's Cathedral in Petersburg.

Over time, Brjullow's health had deteriorated significantly. In 1849 he left Russia and went to Madeira for medical treatment . In 1850 Brullov returned to Italy. He died there in June 1852 in Manziana near Rome and was buried in the Protestant cemetery in Rome .