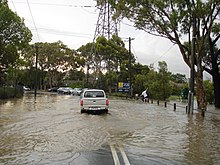 One speaks of a flash flood or sudden flood, "[...] when, within six hours after a heavy rain event or a dike breach or after the breakthrough of another barrier (landslide, ice dam), huge masses of water suddenly burst over an area."

The causes can be different: heavy rains , storms , dissolution of blockages in the normal course of the river , for example due to ice dams, or due to a dam break . Flash floods occur when there is more water than can be absorbed by the water system further down or by the ground. The draining water flows downwards at high speed and collects in lower lying areas. Flash floods most commonly occur after heavy rain in normally dry areas. 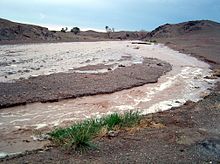 Flash flood in the Gobi desert in Mongolia

However, the tidal waves can travel for kilometers from there. In doing so, they often pull objects with them, which additionally endanger people and property in the course of the flooding.

Flash floods are very dangerous because of their suddenness. Vehicles offer little to no protection against being washed away. Even a water level of 50 centimeters can pull an off-road vehicle with it. In some desert areas, dry and poorly absorbing river beds , so-called wadis , can swell into torrential currents within seconds , even after distant downpours, and pose a threat to hikers and vehicles.

Metaphorical use of the term

The lexeme has been used in a figurative sense for a long time. For example, it served as a metaphor to criticize the multitude of Anglicisms in everyday German use.