Warning of dangers from ice and snow

Dangerous goods : Labeling for the class toxic substances (6.1 according to ADR)

A warning is the prediction of possible future damage , which could, however, still be prevented or alleviated. It draws attention to an impending danger .

Typical signal words of the warning are next to Warning! also be careful! , Attention! (official abbreviation Achtg. ) or outdated care ! , especially for movements, also hold! and stop!

The recall of a warning is the all-clear .

The word comes from the Germanic group of words about true (Old High German: warninga ) and actually means in the verb to be careful . Warning is only documented from the 16th century.

There were warnings at an early stage, given the 35,000-year-old imagery. For example, around 1000 BC warned. Neo-Assyrian rulers potential attackers at the palace of Nineveh with pictures of brutal battle scenes. There were and are also written warnings, e.g. B. Inscriptions on pharaohs' graves warning of disturbance of the peace of the dead. In order to be able to receive them, the recipient must be able to read and know the vocabulary (s) used.

Beware of the dog! (lat. cave canem ) - mosaic in Pompeii

The warning of dangers and the necessary skills are an elementary part of the communication between living beings. Warnings are transmitted through behavior (e.g. threatening gestures ), sounds (warning scream - e.g. from birds), visual stimuli (colors, shape) or messenger substances ( pheromones ). The respective communication channels are often similar to those for sexual attractants.

The warning differs from the threat in that the person giving the warning does not ascribe any direct influence on the occurrence of the damage. In contrast to an announcement, the warned person (still) has the opportunity to avert the damage or to reduce the probability of the damage occurring by acting or failing to do so. A warning wants to change behavior.

Black and yellow and understandable for everyone: shooting warning from the Guardia di Finanza

Warnings must be understandable to serve their purpose.

In evolution, preferred schemes for warning signals have emerged:

One can hunger , thirst , fatigue , itching, or pain consider an organism of impending impairments as internal warnings.

In data processing, such mechanisms are copied, i.e. warnings are collected internally, and only reformulated in the user interface in "communication" between the system and humans (operating system warnings, virus warnings, etc.)

Warning sign at the border to Grafenwoehr military training area

In order to achieve a change in behavior, a warning must be given

The announcement can be made through sound signals, pictograms , ideograms , characters and other optical signals. Warnings that are communicated via the activation of other senses (sense of smell, sense of taste, sense of smell) are also conceivable. Warnings that are directed at an indefinite group of people should be designed in such a way that they can be understood regardless of age and language, in order to achieve the highest possible degree of "effectiveness".

For this purpose, one can use (flash, contrasting the evolutionary out formed repertoire of warning signals warning colors , blue light , siren , sirens , bitter substances in shampoo and alcohol, shoulder pads and the pack formation ), can trigger whereby the message immediate reactions. Even pictograms are immediately understood by most people due to their simplified visual representation. Sometimes the recipient needs a certain amount of empirical knowledge to understand a warning.

Because of their abstract nature, ideograms enable a greater range of content that can be communicated. But they are not immediately understandable, but have to be interpreted or learned. To the extent that ideograms are anchored in tradition, culture or upbringing, this process happens effortlessly. Their disadvantage is their culture dependency. 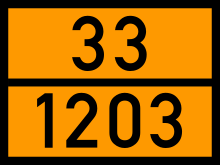 Depending on the type of hazard , different signals are common ( alarms ): light , sound and smoke signals , flag signs , optical signals (e.g. traffic signs according to § 40 StVO , railway signals ), gestures , also special calls ( interjections ): attention , care , in the shipping sector in Wahrschau . Before law enforcement officers on the use of firearms may do, they are generally required to have a warning shot to give.

Regulations on the signal words

The signal words provide information about the severity of the hazard:

The labeling of hazardous substances under the global system GHS calls for attaching a signal word on the label, depending on the risk category: Caution (Engl. Warning , abbreviation Achtg. ) Or danger ( danger , abbr. Found. , All with no exclamation marks). Here, 'Caution' stands for the “less serious” hazard categories.

Halt and stop suggest in particular not to approach or to go further. In the transport they are in stop sign normative (is "stop" out of date in the EU), as a light signal corresponding to red in the light signal system (traffic light) and prohibition .

Appeals for fear on cigarette packets in Germany

According to the Product Liability Act, the manufacturer of a product is obliged to warn of a hazard posed by his product. In order to minimize dangers in technology, a risk assessment is created to reduce the risk . The identified risks and hazards are eliminated according to the STOP principle. Hazards that cannot be eliminated are named in instructions and / or product safety labels. For this purpose, a safety notice or warning notice corresponding to the degree of risk is created in the instructions or attached to the product as a product safety label .

Anyone who opens up a source of danger has to prevent damage to third parties from occurring ( manufacturer's duty of safety ). A danger can either be averted by taking the product out of circulation or the occurrence of damage can be shaped independently by a warning of a (certain) use of the product. In the area of ​​technical equipment, food and luxury goods, the road safety obligations are often precisely defined by law (e.g. Tobacco Products Ordinance). Game theoretical warnings play a role in financial products .

Warning and the all-clear are an official state task in the context of civil protection and disaster protection . Depending on the political situation, foreign ministries issue travel warnings . These are official recommendations not to travel to a particular country or area or to cancel.

The legal evaluation of so-called sovereign warnings , which can serve to protect elementary legal interests of the population such as life, health, property or the legal system as such, is controversial, but at the same time represent in concrete terms for the individual as impairments in actions for which the Protection area of ​​a fundamental right is opened. Since warnings do not contain any instructions or prohibitions (they do not have an imperative character), they do not fall under the classic concept of an encroachment on fundamental rights . In particular, the freedom of occupation from Art. 12 GG or the guarantee of property guaranteed by Art. 14 GG are affected. State warnings are to be understood as measures to avert danger in the form of unilateral, legally non-binding declarations made by an authority , which contain an implied request for certain behavior in order to avoid the occurrence of a danger to the public. The question of the legality of such warning measures is controversial insofar as there is usually no legal basis for the state to impair fundamental rights. If there was an interference, it would be an unlawful violation of the relevant fundamental right. The fundamentally required legal basis for authorization was missing. Nevertheless, the Federal Administrative Court recognized the sovereign warning as legal in principle. The lawfulness of state information action does not require a separate authorization basis, but is, derived from general legal principles, a task of the acting body and compliance with the limits of jurisdiction. In addition, the requirements for the correctness and objectivity of the information must be observed, and the state information activity, in terms of its objectives and effects, must not be a substitute for a state measure that would be classified as an encroachment on fundamental rights.

The Federal Constitutional Court developed this jurisprudence primarily in the very controversial decisions "Glycol" and "Osho". It applies a fairly easy standard to the responsibility of the public body distributing it, which is important for the affirmation of the legality of information. The federal government should also be responsible for warnings about a sect, although the wording of the competency provisions of the Basic Law does not provide much for this.

"Due to its role as state management, the federal government is entitled to information work wherever it has a general state responsibility that can be fulfilled with the help of information."

In sociology, the sociology of disasters is particularly concerned with the warning system.

She examines u. a. the fact that a "warning" features of the consequences of self-destructive forecasting ( self-destroying prophecy wears). If the damage can be prevented as a result of the warning, the relevant warning appears retrospectively in the social perception as “exaggerated” or “inapplicable” (the multi-valued Günther logic determines more about this ). This can lead to recipients underestimating ('taking too lightly') or ignoring the next warning of this kind (or warnings in general) and therefore reacting only half-heartedly or too late (so-called blunting effect). For example, in 2005 New Orleans residents ignored warnings (timely evacuation requests) about Hurricane Katrina et al. a. this is because other hurricanes had not previously been as severe as forecast and described in the warnings.

Dulling can also occur if omitted warnings have been punished so sustainably through the process or administrative channels that the organization obliged to issue the warning lowers the warning threshold (too much) or if important warnings disappear under less important ones (e.g. in the case of extensive information leaflets for medication).