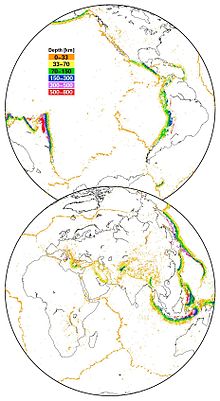 Seismicity on a global scale

The seismicity is all the earthquakes -Erscheinungen an area. Spatial and temporal distribution as well as energy and sequence of the occurring earthquakes can be examined and evaluated seismologically , so that an assessment of the seismicity is possible for most places on earth. In a worldwide comparison it is greatest at the plate boundaries of the continental plates .

The recording of earthquakes with seismographs allows the calculation of the location and time as well as the released energy ( magnitude ) by evaluating seismograms . The sensitive measuring devices register events, the energy release of which differs by many powers of ten . Can be recorded so catastrophic , seldom takes place as well as the frequent, but without instrument is not perceptible earthquakes micro-earthquakes . With regard to an area, it is possible to compile these properties of the occurring earthquakes in a list, to evaluate them in diagrams or to represent them on a map.

In addition to the rather qualitative representation of the seismicity described above, a quantitative calculation is common. This assumes equally large areas of the area under consideration (defined by a coordinate interval of geographical latitude and longitude ) and, due to the shell structure of the earth, differentiates between different depth ranges (up to 50 km, 50 - 300 km and more than 300 km depth). With these specifications, the seismicity S results as follows:

: Energy of a single event

: Range of depth of focus

: Interval of the cooking time