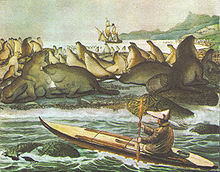 Ludwig Choris: The Rurik off the island of Sankt Paul (Alaska) 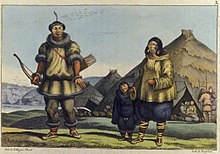 Ludwig Choris was born in 1795 in Yekaterinoslav as the son of German parents. He attended high school in Kharkov , where his father taught at the university. After the early death of his parents, the titular counselor J. Matthes, who gave drawing lessons at the university , took him to his house as a foster child. With this, Choris came to Saint Petersburg , where he continued his education, including in the field of natural history . He had attracted attention early on with his drawings and portraits . In 1813 he went on his first research trip. He accompanied the botanist Friedrich August Marschall von Bieberstein as a plant draftsman on a trip to the Caucasus . He then returned to Saint Petersburg to attend the Imperial Art Academy .

In 1815 he was selected from several competitors to take part as a painter and draftsman in Otto von Kotzebue's circumnavigation with the brig Rurik . The naturalists Adelbert von Chamisso and Johann Friedrich Eschscholtz were also on board . The journey led from Saint Petersburg through the Atlantic and around Cape Horn into the Pacific . After a visit to Kamchatka , the Rurik crossed the Bering Strait in search of the Northwest Passage . The Kotzebuesund in Alaska was discovered and a peninsula there was named after Choris. As a result, the Chukchi Peninsula , the Aleutian Islands , Hawaii , the Marshall Islands and San Francisco were called. After a second visit to the Bering Strait, the Rurik returned home in 1818 via the Sunda Strait and the Cape of Good Hope .

During the expedition, Choris made a large number of watercolors and drawings, including excellent portraits of the inhabitants of the countries visited. But he also captured scenes from their everyday life and drew everyday objects, landscapes, animals and plants.

After returning from circumnavigating the world, Choris went to Paris in 1819 , where he was in close contact with François Gérard and Jean-Baptiste Regnault . He learned the technique of lithography and subsequently made lithographs of his own watercolors. With these he illustrated the travel reports Kotzebues and Chamissos. In 1822 he published his own travelogue in French ( Voyage pittoresque autour du monde ), which also contains articles by Chamisso and Georges Cuvier . In 1826 there were 24 other lithographs ( Vues et paysages des régions équinoxiales ).

In 1827 he went on a trip to Central and South America on behalf of the Musée des Jardins des Plantes , where he was supposed to collect and draw plants, but also to paint portraits of the Indians . He visited the West Indies and New Orleans before setting foot on Mexican soil in Veracruz. On the way to Xalapa , he was attacked and murdered by bandits in March 1828.

In 1986 the diary he kept during the Rurik expedition and in the months that followed was found in the Sainte-Geneviève library in Paris and published shortly afterwards. 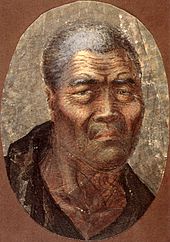 King Kamehameha I of Hawaii

Choris' work was highly valued by his contemporaries. He differed from the painters on previous research trips in that he portrayed the members of non-European peoples neither as frightening "savages", nor idealized as " noble savages ", but - as in his plant drawings - was solely committed to the truth.

From a scientific point of view, his work is of inestimable value to anthropologists . For Hawaii in particular, it represents a great legacy. No other artist has reproduced ancient Hawaii with such authenticity. His two portraits of King Kamehameha I are of great historical importance and are still shown today at Hawaiian celebrations.

Also of interest are his depictions of San Francisco at a time when it was only an insignificant Spanish outpost.

Illustrated works by other authors