This article is about the historic East Slavic nation of severians, for the South Slavic people of Seweren see there 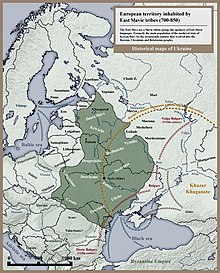 The Severjanen ( Ukrainian Сіверяни Siwerjanyj ; Russian Северяне Severjane ) were an East Slavic tribe in the early Middle Ages , settled along the Desna , Sejm and Sula rivers . The historic area of Sewerien is named after them.

The origin of the name is controversial. The idea that the name goes back to the Slavic word for "north" ( sěver ) is countered by the fact that this Slav tribe never lived in the north of the areas populated by Slavs. Another explanation traces the name back to the Persian word for "black" ( seu ).

The Severian Empire existed as a political unit from the 8th to the 11th centuries. They had to pay tribute to the Khazars in the 8th and 9th centuries, were incorporated into the Kiev Empire by Oleg of Novgorod at the end of the 9th century and took part in his campaign against Constantinople in 907. Eventually they became part of the Chernigov Principality .

The Severjans are mentioned in the 9th century in the Geographus Bavarus , by Constantine VII , by the Khazarian Chagan Joseph (around 960) and in the Nestor Chronicle , for the last time in 1024.

Significant settlements of the Severjanen lay in the area of ​​today's places Chernigow , Kursk and Novhorod-Siverskyj . During archaeological excavations, numerous rural settlements from the 8th to 10th centuries as well as burial mounds of the Severjan family were found. The tribe operated agriculture and animal husbandry and produced various crafts.