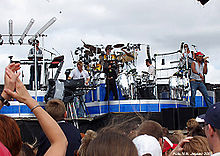 Safri Duo is a Danish musician - Duo , which by its percussion highlights (at first Classical , later Dance ).

The duo consists of Uffe Savery (born April 5, 1966 ) and Morten Friis (born August 21, 1968 ) (where Safri was composed of the two surnames). Both are school friends who also graduated from the Royal Danish Conservatory of Music together. Since 1988, both have rewritten classical works for their percussion music and have performed worldwide.

The breakthrough came when they both changed their style and switched to dance. Her biggest success was Played-a-Live (The Bongo Song) . The song reached number two in the German single charts and number one on the Swiss hit parade and the Danish charts in 2001 . In the same year they were the live act during the opening ceremony of the Veltins-Arena in Gelsenkirchen. In addition, the duo received the Echo for Best International Dance Act in 2002 , took part in the Nokia Night of the Proms tour in 2005 and played several songs there with an orchestra.

2010 Safri Duo presented in cooperation with Velile the soundtrack Helele for the transmissions to the 2010 FIFA World Cup radio station RTL and the Swiss television .