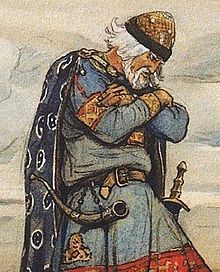 Oleg in a painting by Viktor Vasnetsov

Oleg , called "the wise", ( Cyrillic Олег; Old East Slavic Ольгъ; Old Norse Helgi ; † 912 or 922 ) was a Varangian ruler of the Rus . He came from the Rurikids dynasty and is said to have assumed rule over the old Russian state in 879 as regent for Igor , the son of Ruriks . During his tenure, the Rurikids' center of rulership was relocated from Novgorod to Kiev , and Oleg is therefore considered to be the founder of the Kievan Rus .

As with all other old Russian rulers of the 9th century, it is not definitively clear whether Oleg actually existed or whether he is a legend. However, the relocation of the Rurikid ruling center from Novgorod to Kiev at the time of Oleg is clearly documented. With the control of this strategically located settlement on long-distance trade routes, the formation of the Rurikidic empire began.

The few reliable data that are associated with Oleg include a major campaign against Constantinople in 907 and a trade treaty with the Byzantine emperor from 911. Oleg allegedly died in 912. At that time, Rus was not yet Christianized. The population faced confrontations with Christianity through Christian Orthodox settlements on the Black Sea coast , which is what the later Orthodox character of Russia goes back to.

Oleg made the East Slavic and Finnish tribes of the Volga - Oka -area tribute .