This article deals with the biocide used by the National Socialists for mass murder. For other meanings, see Zyklon B (disambiguation) . 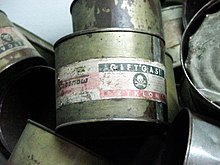 Tin can: Zyklon B

Cyclone B is the name for a 1922 by the company Degesch under the direction of Haber developed biocide , the active ingredient of hydrocyanic acid (chemical hydrogen cyanide Molecular Formula HCN) as the gas from pellets exiting. In humans, this gas is mainly effective through inhalation , in that after a few breaths it stops the body's cells from breathing ( internal suffocation ). Between 1942 and 1944 it was used on a large scale in the Auschwitz-Birkenau extermination camp for industrially organized mass murder ; Camp inmates were also killed with it in several other concentration camps. The name for the poison has become one of the synonyms for the technology and system of the Holocaust .

Zyklon B consisted of liquid hydrogen cyanide, which was dripped onto absorbent carrier materials during production. It was initially used diatomite , this carrier was later replaced by a highly porous gypsum product ("Erco"). A third carrier were pulp disks, so-called discoids. In addition, a chemical stabilizer was added which, because it gassed faster than hydrogen cyanide and irritated the eyes and mucous membranes, also acted as a warning substance and was intended to prevent accidents. In addition, another, slower outgassing warning substance was added. The granulate was delivered in tin cans that could be opened with a special hammer. Oxalic acid and methyl chloroformate were used as stabilizers ; the shelf life was guaranteed for a period of three months after delivery. In practice, Zyklon B could be stored much longer if the cans were protected from moisture and rust. In order to be able to withstand the overpressure of 0.25 to 1  bar inside the cans, they were made of 0.4 mm thick sheet metal and pressure-resistant up to at least 6 bar. The closed cans were tested in the factory and heated to 60 ° C. Zyklon B was delivered in cans of 200 g, 500 g, 1000 g, 1200 g and 1500 g.

The product was sold as a sales brand Zyklon - often without the additional letter B on the label - by two dealers. The additional designations A, B and C were used in the factory to identify different processes, irritant additives and compositions. Zyklon A was introduced in 1920. This mixture of methyl cyanocarbonate and methyl chlorocarbonate was sprayed from large pressure vessels, but was considered unsafe and uneconomical. Zyklon C contained the additive chloropicrin , which attacked uniform buttons, metal buckles, etc. and was therefore unsuitable for disinfesting clothes. The preparation without any warning substance was a special form; this was noted on the label with the designation “Caution, no warning substance”. It was used to treat food and other susceptible substances.

Forms and invoices issued by the specialists commissioned by the sales company Testa for fumigations carried out by them sometimes contained columns with consecutive letters C, D, E and F, through which a specific concentration was officially documented in the fumigation report.

Zyklon B was developed to make it safe to handle hydrogen cyanide. Due to its low boiling point of 25.7 ° C, the cytotoxin hydrogen cyanide is dangerous to handle, especially in liquid form. Hydrocyanic acid has a high vapor pressure even at room temperature and is accordingly highly volatile . Furthermore, hydrocyanic acid forms explosive mixtures with air in concentrations above 5.6%. The slower outgassing when using Zyklon B largely prevents the sudden build-up of high (explosive) concentrations. Significantly lower concentrations are sufficient for pest control in ships and silos; in practice, concentrations of approx. 0.03% are used. Zyklon B is easy to transport thanks to its binding to a substrate (Erco cube, discoids), stabilization through chemical additives and the packaging.

If Zyklon B is used properly as a pesticide, accidents are extremely rare. Accidents such as explosions and poisoning with hydrogen cyanide are often due to other products such as B. cyanide , liquid hydrogen cyanide or other chemical accidents. Only one accident is known when Zyklon B was used by the Wehrmacht and when it was used as intended for disinfestation (e.g. clothing) in the concentration camps, although several hundred tons of Zyklon B were used during this time.

Walter Heerdt's invention of the process for absorbing hydrogen cyanide in kieselguhr made it possible to produce an efficient and safe pest control agent. This process was applied for a patent on June 20, 1922 by the German Society for Pest Control mbH (Degesch for short) under number DE 438818, which was granted by the Reich Patent Office on December 27, 1926.

The active ingredient was produced by the Dessauer Werken für Zucker-Raffinerie GmbH and from 1935 also by the Kaliwerke AG in Kolín, Czech Republic, on behalf of Degesch, a subsidiary of Degussa , the IG Farben Group and Th. Goldschmidt . Zyklon B was sold by the trading companies Tesch & Stabenow (Testa) and Heerdt-Lingler (HeLi).

Degesch's annual reports show annual production quantities between 160 tons and 411 tons for the period from 1938 to 1943. In 1943, the price for armaments contracts was reduced to 4.55 Reichsmarks per kg. Dessau was bombed at the end of May 1944 and the factory was so badly damaged that annual production fell to 231 tons. During the heavy British air raid on Dessau on March 7, 1945, the factory and warehouse were completely destroyed.

In the GDR , from 1952 to 1969, Zyklon B was manufactured as a disinfestation agent by VEB Gärtschemie Dessau, the successor to Dessauer Werke für Zucker-Raffinerie GmbH, and sold under the name Cyanol . In addition to the location of the former production facility, an information and warning point was opened at the brewery bridge in Dessau-Roßlau on January 27, 2005 on the occasion of the 60th anniversary of the liberation of the Auschwitz extermination camp . After 1969, Zyklon B was manufactured in Schwedt .

In the Federal Republic of Germany it was sold after 1945 under the name Cyanosil and Zedesa hydrogen cyanide in Germany and under the name Zyklon abroad. The manufacturer was the German Society for Pest Control mbH, Detia Freyberg GmbH and Desinsekta GmbH. The approval for this product expired in 2001. The production of Zyklon B was continued under a changed brand name as Uragan D2 in the Czech Republic (Lučební závody Draslovka, as , Kolín ). The product consists of at least 97.6% anhydrous hydrogen cyanide, which is stabilized by adding 0.1% phosphoric acid and 1.0% sulfur dioxide . It is filled in pure liquid form in stainless steel pressurized gas bottles weighing 27.5 kg, as well as, analogous to the product cyclone discoids, weighing 1500 grams in hermetically sealed stainless steel cans , adsorbed on pulp discs . The agent is approved under the trade names Uragan D2 , Bluefume and Cyanopur in several EU countries as a fumigant to combat wood-destroying insects in wood and hygiene pests (insects and rodents) in empty objects and means of transport.

Zyklon B was mainly used as a vermin exterminator for the fumigation of ships, cold stores and grain mills, as well as the disinfestation of mass accommodation and the delousing of clothing. After 1939, the need rose sharply due to the deployment in the Wehrmacht and in camp accommodation for forced and foreign laborers . According to Detia-Degesch, hydrogen cyanide was still used in 2010 in South Korea for fumigation of fruit under the trade name Cyanosil . In Germany, Cyanosil and the related crop protection agent Zedesa hydrocyanic acid are no longer used. The approval by the Federal Office for Consumer Protection and Food Safety expired on December 31, 2001.

Use in concentration camps

In the Auschwitz-Birkenau concentration camp , Zyklon B was used from the spring of 1942 to murder camp inmates and newcomers from the ghettos en masse and on an industrial scale in gas chambers disguised as shower rooms . It is "not excluded" that independently of this, Zyklon B had been used to kill the mentally ill at Fort VII in Posen at the end of 1939 in order to test the effect of the poison gas on them (see also First Gas Chamber in Posen ).

In autumn 1941 SS-Hauptsturmführer Karl Fritzsch had 600 Soviet prisoners of war and 250 sick prisoners gassed with Zyklon B in the basement of Block 11 of the Auschwitz I main camp . The camp commandant Rudolf Höß then decided to only use this poison gas because he considered it “more effective” against engine exhaust and carbon monoxide from gas cylinders. Zyklon B was also used - to a much lesser extent - to kill people in the Majdanek , Mauthausen , Sachsenhausen , Ravensbrück , Stutthof and Neuengamme camps . In most of the extermination camps , engine exhaust, sometimes pure carbon monoxide, was used for this purpose.

In experiments with poison gases in the Croatian concentration camp Stara Gradiska were conducted also Zyklon B was used.

From 1979 to 1985, Jean-Claude Pressac conducted detailed research into the use of Zyklon B in the Auschwitz-Birkenau extermination camp. He found:

Due to the war-related shortage, the proportion of warning and irritant substances in Zyklon B was reduced; from June 1944 the addition was dropped entirely. As early as June 1943 there were deliveries of Zyklon B without warning material to Auschwitz. According to the reasons for the verdict in the trial against the managing director of Degesch / HeLi ( Heerdt- Lingler), it has been proven that this special form was used there to kill people.

In obtaining the Auschwitz concentration camp was hauptsturmführer Robert Mulka active, who also victims in the gas chambers and among other reasons at the Frankfurt Auschwitz Trial was sentenced. Those responsible for the delivery companies Degesch (German Society for Pest Control), HeLi (Heerdt-Lingler) and Testa (Tesch & Stabenow) were also on trial. Bruno Tesch and his managing director Karl Weinbacher were sentenced to death and executed by the British military justice in the Testa trial . Gerhard Peters von der Degesch was initially sentenced to six years ' imprisonment, but after serving in part , he was acquitted in the retrial in 1955, eight years before the start of the Auschwitz trials.

Commons : Zyklon B  - album with pictures, videos and audio files