Tesch & Stabenow , also known by the acronym Testa , was a leading German disinfestation company . It had the monopoly for the distribution of Zyklon B in large areas east of the Elbe.

The company also supplied the Auschwitz concentration camp with the pesticide Zyklon B, which was first used in the main camp at the end of 1941 for the mass killing of people.

The company was founded in 1924 by Bruno Tesch and P. Stabenow under the company Tesch & Stabenow, International Society for Pest Control mbh , based in Hamburg . It received special approval from the Senate to carry out pest control in ships, cold stores and granaries with highly toxic hydrogen cyanide gas. In 1928 the company moved its headquarters to the Hamburg Ballinhaus, which was renamed Messberghof ten years later . 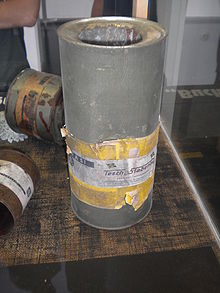 In 1925, Degesch GmbH in Frankfurt am Main gave Tesch & Stabenow a monopoly for the application and distribution of the Zyklon B product in the area east of the Elbe. In 1927, the partner Stabenow left the company; Bruno Tesch now held 45% of the capital, Degesch held 55%; in June 1942 Tesch became "sole owner" (sole shareholder of the GmbH).

Testa increasingly supplied the Wehrmacht ; In 1941, Tesch himself trained SS members in Sachsenhausen in the regular use of the pesticide. From 1941 Testa sold Zyklon B to the concentration camps Auschwitz, Majdanek , Sachsenhausen , Ravensbrück , Stutthof , Neuengamme , Groß Rosen and Dachau . The company achieved the highest revenue from sales of Zyklon B in 1943.

The company was in 1947 under his old firm Testa continued with changing owners until 1979 at the old seat, but now the acronym for Te chnical Entwesungs sta tion stand.

1979 merged the Testa GmbH with the Heerdt-Lingler GmbH (HeLi) with financial support from the Degesch GmbH Testa GmbH.

On September 3, 1945, the owner Bruno Tesch, his authorized signatory Karl Weinbacher and the employee Joachim Drosihn were arrested in the course of an investigation by the British military courts . They were accused of knowing that the Zyklon B they supplied was also used to kill people. The specific charge that led to the death sentence was to have supplied the poison gas to kill Allied nationals . A former accountant even claimed that Bruno Tesch had confirmed this possibility of use to representatives of the SS and had specified the type of application.

Tesch and Weinbacher were sentenced to death in the first Curiohaus trial . Your supported by numerous suitors for clemency were rejected and the judgment on 16 May 1946 at the prison Hameln enforced . Drosihn was acquitted.

coping with the past

A plaque at the Curiohaus reminds us that in the first few years after the war there were trials against SS members who were responsible for crimes in the Neuengamme concentration camp. However, there is no specific reference to the Testa process and the keyword Zyklon B.

Memorial plaque at the Meßberghof

It was not until 1992 that there was an initiative to come to terms with the past , to put up a memorial plaque at the Messberghof; Testa had its company headquarters there until its liquidation in 1979. The real estate company and the Deutsche Bank involved expressed concerns about the reference to the story. It was not until June 1, 1997 that a plaque was unveiled. It contains the final verse of the poem Dos lied vunem ojsgehargetn jidischn volk (Great Song of the Exterminated Jewish People) by the Jewish poet Jizchak Katzenelson , who was murdered on May 1, 1944 in Auschwitz.