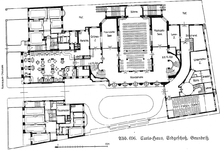 Floor plan of the Curiohaus when it was completed in 1911

The Curiohaus is an office and event building built as a society house in Hamburg in the Eimsbüttel district, Rotherbaum district . It was built between 1908 and 1911 according to a design by the architects Johann Emil Schaudt and Walther Puritz at Rothenbaumchaussee 11-17 for the Society of Friends of the Fatherland Schools and Education and named after the founder of this society, Johann Carl Daniel Curio . Since 1948 it has been the property and headquarters of the Hamburg Regional Association of the Education and Science Union (GEW). In October 1997, the building as a whole and with its fixed furnishings, the front garden pedestals, the lights and the oval of the courtyard garden was placed under monument protection.

The great hall of the Curiohaus was largely spared from bomb damage during the Second World War . From 1946 to 1948 it served the British military courts as a courtroom for the " Curiohaus Trials " relating to Nazi and war crimes. This also included the main Neuengamme trial and seven Ravensbrück trials against SS members who were responsible for crimes in these concentration camps (including the numerous sub-camps). The main Neuengamme process is often referred to as the “Curiohaus process”, but it was only one of many. In this process, u. a. extreme mistreatment, the killing of Russian prisoners of war with poison gas, the hanging of Dutch resistance fighters and the murders of twenty children in the Bullenhuser Damm subcamp , and thus known to the general public.

From 1967 until its restoration in 1997, the Curiohaus served as the university cafeteria . Since 1998 the Curiohaus has been used as a venue for concerts, conferences, presentations, company or club parties.

coping with the past

one of two sculptures by the sculptor Johann Michael Bossard

A blackboard inscription reminds of the founding and the expropriation of the house in 1933. It is also pointed out that the processes of the British military courts took place in the house. The subject matter of the individual proceedings, such as the child murder at Bullenhuser Damm, the aviator murders and the trial against the Zyklon B supplier Tesch & Stabenow , which is also being negotiated here, is not mentioned separately.

A building next to the Curiohaus, Rothenbaumchaussee 19 (also referred to as "Ro 19"), which had been owned by a community of heirs of Jewish descent, was purchased in the spring of 1935 by the "teachers' association", which existed before 1933 and later became legally independent, and after 1945 was awarded by an independent review committee of the GEW. Since 2005, a working group of trade unionists and experts called in has been researching the circumstances that led to the purchase of the house. None of the parties involved expressed any doubt that the house was clearly legally owned by the GEW. Those who thought the sale could be described as “ Aryanization ”, among other proposals, considered selling it in order to build a Jewish museum there.

On November 27, 2006, the State Representative Assembly (LVV) of the GEW Hamburg decided to put an information board on the house on the history, to publish a brochure and further documentation and to check by spring 2007 whether it was possible to check the income in view of the financial consequences to waive the rental. At the following LVV on April 23, 2007, the claim of an "Aryanization" was classified as not proven.

A part of this working group nevertheless demanded the sale of the house to the city of Hamburg due to a political and moral responsibility. Others pointed out that neither the sellers nor a Jewish aid organization claimed a refund after the war. There is no conclusive evidence that the selling price was inappropriately low and that it was due to persecution. Even with a different historical assessment, the cheap sale to the city is not a mandatory consequence. In 2007 LVV refused the sale by a narrow majority. She decided to set up a fund from which a sum of up to 10,000 euros can be paid out annually to support anti-fascist and anti-racist initiatives inside and outside the GEW Hamburg .

The controversy was again the subject of the state representatives' meeting in November 2008. A general historical responsibility was acknowledged, but the matter remained with the previous year's decision.