Announcement of the judgment in the 1st Ravensbrück Trial (1947)

The trials under UK jurisdiction

From 1946 onwards, the British authorities carried out seven Ravensbrück trials - partly parallel to the Nuremberg doctor trial , in which the human experiments were treated in Ravensbrück and the Ravensbrück concentration camp doctors Carl Clauberg , Fritz Fischer , Karl Gebhardt and Herta Oberheuser were convicted. A military court was set up for this purpose . Between three and five British officers were appointed as judges, assisted by a legal advisor . The group of accused was made up of all ranks of the camp personnel: camp leaders, doctors, guards and also former prisoners who had mistreated other prisoners. A total of 38 people were tried, including 21 women.

War crimes, mistreatment and murder of prisoners formed the complex of offenses of the proceedings, whereby crimes against German nationals were not considered in this proceedings. Major-General Westropp chaired the meeting, assisted by five officers from the British Army and a Polish major. Major Stewart was charged, and a Mister Stirling was present as legal advisor. The defendants had criminal defense lawyers of their choice at their disposal. Official observers from ten nations, press reporters and representatives of the German judiciary were present at the first Ravensbrück trial. A total of 16 defendants had to answer in court, all of whom pleaded “not guilty” at the beginning of the trial.

All those sentenced to death - with the exception of Vera Salvequart, Carmen Mory and Percival Treite - were hanged by Albert Pierrepoint in Hamelin between May 2 and 3, 1947 .

Two other defendants, camp commandant Fritz Suhren and labor leader Hans Pflaum , had fled from custody before the start of the trial and went into hiding using false names. However, they were arrested again in 1949 and handed over to the French occupation authorities, which had opened another Ravensbrück trial in Rastatt . Both defendants were there sentenced to death , and on June 12, 1950 shot .

In these proceedings only one defendant was tried. It was Friedrich Opitz , who ran the factory within the camp. Before the first Ravensbrück trial began, Opitz had managed to escape.

Trials were held against five female camp officials from the Ravensbrück concentration camp and the Uckermark subcamp on the basis of the following charges:

Toberentz and Braach were acquitted because they were not subject to women of Allied nationality in the youth concentration camp, but only to German prisoners. The fate of the German prisoners was not the subject of the proceedings.

All of the accused belonged to the medical staff of the Ravensbrück concentration camp, including a prisoner who was used as a nurse. The charges focused on the ill-treatment, torture and murder of Allied prisoners in the gas chambers.

Ganzer had already been charged and acquitted in a Russian military court. The death sentence now imposed on her was later commuted to life imprisonment, which was eventually reduced to twelve years. She was released on July 6, 1961.

Three members of the SS were charged with murdering prisoners.

The two defendants were charged with mistreating Allied prisoners in the Ravensbrück concentration camp.

In this last trial, six female guards were charged with ill-treating Allied prisoners and selecting prisoners for the gas chamber.

The trials under French jurisdiction 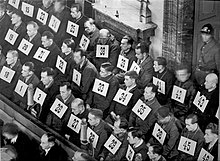 The defendants in the war crimes trial in Rastatt, December 1946

From 1949 to 1950 there were trials against members of the camp staff before the French military court in Rastatt .

On March 10, 1950, the court sentenced the former camp commandant Fritz Suhren and the labor operations manager Hans Pflaum to death. Both were originally to be indicted in the first British Ravensbrück trial. However, on November 16, 1946, they managed to escape from the British internment camp in the former Neuengamme concentration camp . After they were arrested again in March 1949, they were extradited by the Americans to the French and tried in Rastatt for multiple murders and sentenced to death on March 10, 1950. The verdict, confirmed on May 13, 1950, was carried out on June 12, 1950 by shooting Pflaum and Suhren.