The Grunewald Tower is an observation tower on the Karlsberg in the Berlin district of Grunewald . Located on the western edge of the Grunewald forest at Havelchaussee 61, the viewing platform offers a view over the Havel at a height of 36 meters .

Wood engraving after a drawing by Franz Schwechten

In 1897, at the suggestion of his district administrator Ernst von Stubenrauch , the district council of the Teltow district decided to erect a memorial to commemorate the hundredth birthday of the Prussian king and German emperor Wilhelm I, who died in 1888 . A lookout tower was to be built on the Karlsberg in Grunewald. The execution was entrusted to Franz Schwechten , who had already built the office building for the Teltow district. On March 10, 1897, Schwechten's design received the approval of Kaiser Wilhelm II. In the summer of 1897, the trees on the summit of the Karlsberg were cleared for construction and the summit itself was leveled. The actual construction began in October of the same year. 1½ years later, on March 22nd, 1899, the construction was completed and on June 9th, 1899 the tower was inaugurated.

A comprehensive renovation of the tower took place in 1953. On October 12, 2007 the tower was closed due to significant construction defects in the staircase. The subsequent renovation for 1.5 million euros lasted until Easter 2011. The reopening took place on April 22nd.

The tower has been closed since October 2019 due to the closure of the restaurant. A reopening is expected in spring 2020.

Cross section through the tower

Schwechten designed a 55 meter high tower made of red brick in the style of the Brandenburg brick Gothic . Plaster mirrors, little gables , lancet windows and turrets served as design elements . At the portal influences can design the church architecture of the Middle Ages read. The actual tower stands on a four meter high platform made of reddish Rochlitz porphyry , to which a wide flight of stairs leads up. The base of the tower is designed as a memorial hall. The square-shaped tower rises above this. The covered viewing platform of the tower is 36 meters above the ground and about 86 meters above the water level of the Havel. The tower can be seen from the observation tower on the Löwendorfer Berg near Trebbin , around 30 kilometers away .

The tower is adorned with a circumferential belt, in which inscriptions have been integrated on the west and east sides, and two coats of arms, which are located above the inscriptions. The coat of arms facing the Havel shows the red Brandenburg eagle , the one facing the forest the black Prussian eagle . The inscriptions read “King Wilhelm I. zum Gedaechtniss” and “The Teltow district built me ​​in 1897”. 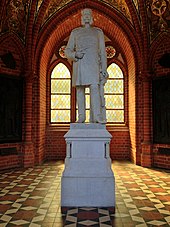 At the inauguration, the memorial hall was still empty. It was not until 1902 that the larger than life statue of Wilhelm I, which Ludwig Manzel had created, was put up in the hall. The four cast iron relief panels with portraits of generals in the corners of the memorial hall are also works by Manzel. They were attached in 1908 and show Roon , Moltke , Bismarck and Prince Friedrich Karl .

The neo-Byzantine ceiling mosaics of the dome-crowned memorial hall are early works by the church painter and mosaic artist August Oetken , executed by the company Puhl & Wagner .

Wilhelm I had been King of Prussia from 1861 and at the same time German Emperor from 1871 . While the Teltow district referred to the Prussian royal title when it was honored, Wilhelm II congratulated the building of the Kaiser Wilhelm Tower by telegram at the inauguration . This name, partly also Kaiser Wilhelm Memorial Tower , then prevailed.

The Grunewald Tower with the so-called "four-window view" is known among sailing enthusiasts : If all four windows are visible on a sailing trip from the nearby Unterhavel (the back ones through the front ones), a drink (often alcoholic) is traditionally toasted.