Alfred Kerr (born December 25, 1867 in Breslau , † October 12, 1948 in Hamburg ) was a German writer , theater critic and journalist . His birth name was Alfred Kempner . From 1887 he used the name Kerr in his publications , in 1909 his name was officially changed to Alfred Kerr in accordance with a decree of the district president of Potsdam .

Kerr was one of the most influential German critics in the period from Naturalism to 1933. He published in newspapers and magazines such as the Breslauer Zeitung , Der Tag , Neue Rundschau , Pan and Berliner Tageblatt . Kerr saw the criticism as an art form of its own and created an apt, witty, ironic and often casual style for it.

Alfred Kempner's parents were the Jewish wine merchant and factory owner Meyer Emanuel Kempner from Vielin (1826–1900, son of the wine merchant Joachim Kempner and Dorothea, née Sternberg) and Helene, née. Calé (1835-1911). His father's sister was the poet Friederike Kempner . Alfred Kempner himself had a sister, Anna Kempner. He spent his childhood in Breslau.

Alfred Kempner began studying history , philosophy and German in Breslau , which he continued in Berlin in 1887. In 1894 he completed his studies with a doctorate to become Dr. phil. in hall . In 1898 his dissertation on the youth poetry of Clemens Brentano under the title Godwi. A chapter of German Romanticism published. 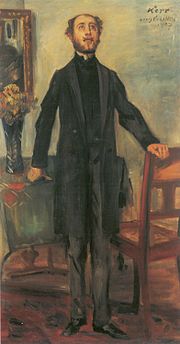 From 1891, already during his studies, he wrote articles under the name Alfred Kerr, mostly theater reviews, for the magazine for literature , the Vossische Zeitung , the Neue Rundschau , from 1895 for the Breslauer Zeitung ("Berliner Briefe") and from 1897 for the Königsberger Allgemeine Zeitung .

From 1900 to 1919 he worked as a theater critic for the Berlin newspaper Der Tag . From 1911 Kerr was initially co-editor, from 1912 to 1915 sole editor, of the art and literary magazine Pan, which was re-founded in 1910 by publisher Paul Cassirer . Here he also published two "lewd" poems by Klabund . In 1911, after the confiscation of a booklet, Kerr published a private letter in Pan from Berlin Police President Traugott von Jagow to Cassirer's wife Tilla Durieux , turning a civil matter into a political matter, and for the first time clashed with Karl Kraus .

Kerr promoted Henrik Ibsen and Gerhart Hauptmann . For decades he was friends with Walther Rathenau . At the beginning of the First World War he wrote some militaristic poems against the warring powers of the Entente for the collective pseudonym "Gottlieb" , which were published in August Scherl's newspaper Der Tag . In the war year 1917 the volume of poetry Die Harfe was published , under the title Die Welt im Drama ( The World in Drama) his collected reviews were edited in five volumes in 1917.

From 1919 to 1933 Kerr wrote for the Berliner Tageblatt and the Frankfurter Zeitung . 1920 published two volumes of his works, entitled The world in the light , more volumes followed in the years 1923-1925 (New York and London , O Spain! , Yankee land) . In 1926 the volume of poetry Caprichos was published. In 1928, Kerr reported in the volume For Alfred Kerr edited by Joseph Chapiro . A book of friendship from his childhood and youth.

In 1925, Kerr and Bertolt Brecht , Max Brod , Kurt Pinthus and Alfred Wolfenstein showed their solidarity with Johannes R. Becher , whose volume of poems Red March - The corpse on the throne - The bomb pilots had been confiscated and temporarily imprisoned for the Becher.

In 1928 there was another conflict with Karl Kraus , who presented his war poems to Kerr, who was now democratically and pacifist, including the Romanian song published in 1916 under the collective pseudonym "Gottlieb" . Although both compared in court, Kraus published the "Kerr file" because of its allegedly unacceptable behavior in the process in his magazine Die Fackel . A reply from Kerr was announced but never written.

Until the Nazi functionary Erich Scholz was appointed political broadcasting commissioner for the Reich Interior Minister and the director of the Berlin Radio Lesson Hans Flesch was dismissed in the summer of 1932, Kerr took a stand against the NSDAP in his glosses for the Berlin radio station . On May 10, 1933, his works fell victim to the book burning by the National Socialists . On May 13, 1933, he was put on the list of authors by the board of directors of the German Booksellers Association , whose works are "to be regarded as damaging to the German reputation". All of Kerr's writings were named in the Börsenblatt's first list of literature to be removed from public libraries. With the law on the revocation of naturalizations and the withdrawal of German citizenship of July 14, 1933, he was expatriated in August 1933 and was listed on the first expatriation list of the German Reich from 1933 .

Kerr fled to Prague on February 15, 1933, then to Lugano, where his family arrived on March 4. Then the family went to Zurich and Paris and finally to London in 1935. The daughter Judith Kerr later described in her books When Hitler Stole the Pink Rabbit , Waiting for Peace and A Kind of Family Reunion, the escape from Germany and life in exile from the perspective of a young girl.

In exile, Alfred Kerr wrote for the newspapers Pariser Tageblatt and Pariser Tageszeitung, newly founded by the exiles, as well as for Le Figaro , Le Temps and Les Nouvelles Littéraires , and from 1939 also for the Jewish weekly newspaper Aufbau in New York.

Considered a dangerous public enemy by the police surveillance and repression organs in Berlin, Kerr was placed on the special wanted list by the Reich Security Main Office in the spring of 1940 , a list of people who had been found to be particularly dangerous after a successful invasion and occupation of the British island by the German armed forces or hatefulness in the eyes of the SS and Gestapo leadership should automatically and primarily be identified and arrested by special commandos.

In 1938, Kerr became a co-founder of the Free German Cultural Association . From 1941 to 1946 he was President of the German PEN Club in exile in London, and from 1946 until his death he was Honorary President. From 1945 on, Kerr worked for the German daily newspapers Die Welt and Die Neue Zeitung . In 1947 he became a British citizen.

In 1948 Kerr went on a lecture tour through Germany. He flirted with his advanced age: “You die a death and you don't know which one, maybe a pretty stroke.” In fact, he suffered a stroke during a theater performance. He then committed suicide by overdosing on sleeping pills . Alfred Kerr died in Hamburg on October 12, 1948. He was buried in the Ohlsdorf cemetery . The grave can be found in the location "Z21-217". His wife Julia died on October 3, 1965 in Berlin and is also lying in this grave.

Alfred Kerr wrote his reviews in his own style and in a very idiosyncratic way of writing. His trademark is the "block style", that is, the Roman numbering of his texts in individual paragraphs or blocks, whereby the individual chapters rarely contain more than 4 to 5 lines. He is the inventor of journalistic conciseness. In Die Welt im Drama it says: “The playmaker turns a thought into a play. The writer wrote an essay. I have a sentence. "

In contrast to Maximilian Harden and Karl Kraus , who categorically refused to use the phrase , in the Kerrschen essays - as later with Kurt Tucholsky - a nominal style dominates, the most important characteristics of which are the concise, meaningful motto or the Use of memorable aperçus belongs. He used dialectal or colloquial formulations such as Berlinisms or foreign language such as Low German expressions, coined suggestive formulas and brought his written speech closer to the spoken one. Dialectisms, foreign language expressions, nouns, comparisons, paratactic sentence structure , ellipses , film-like “montage technique”, fictional dialogues, the address of the reader, and sometimes even the address of the author in a review dominate. The result of the compressed use of all these stylistic devices is a kind of telegram style, which is why Bernhard Diebold also referred to Kerr's texts as “literary shorthands”.

In addition, Kerr is a master of sarcasm , although he sometimes even imitates speech errors in his reviews in order to underline the "childish clumsiness" of a work. Regarding Franz Werfel's adaptation of Euripides ' work Die Troerinnen, for example, he wrote quite maliciously: “Here one can only exclaim: O happy to still be a child. Does the poet fail? Atta, atta! ”Kerr's polemic, Mr. Sudermann, published in 1902 , the Di… Di… poet is based on this principle. Kerr's brief and sarcastic joke is also attested by his review of the very young Robert A. Stemmle's first work , consisting of just one sentence: "Wacker, brave, little crap!"

Publications during his lifetime

In 1990, on the initiative of his children in Berlin, the Alfred Kerr Foundation was set up to promote young German-speaking actors.

The following prizes and awards are associated with the name Alfred Kerr :