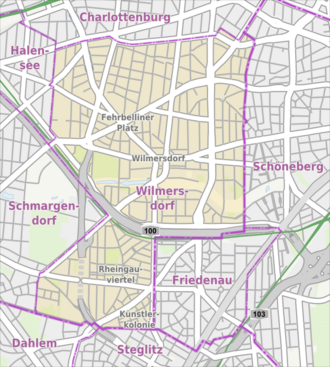 The artist colony at the southern end of the Wilmersdorf district

The Berlin Artists' Colony is a residential area in the south of the Berlin district of Wilmersdorf in the south-eastern continuation of the Rheingau district on the border with the districts of Friedenau and Steglitz . It is bounded by the Südwestkorso , Laubenheimer Straße , Kreuznacher Straße and Steinrückweg . The center of the artists' colony is Ludwig-Barnay-Platz . The settlement was built by the interests of artists and writers from 1927.

Construction of the settlement

The artists 'colony was established between 1927 and 1930 on the initiative of the German Theater Members' Association (GDBA) and the Association of German Writers . The aim of founding the colony was to provide inexpensive and comfortable living space for artists and writers who were not socially secure. The vernacular invented the name "Hungerburg" for the settlement.

The facility was planned between 1924 and 1927 and built between 1927 and 1930. It was financed 75% by the GDBA and 25% by the Association of German Writers. They founded the non-profit Heimstättengesellschaft mbH "Künstlerheim" for the construction of the settlement . The foundation stone of the settlement with the inscription

YOU CREATE THE WORD FROM NOTHING,
AND YOU CARRY IT ON ALIVE,
THIS HOUSE IS DEDICATED TO YOU,
YOU, YOUR CREATOR OF OUR TIME.

The apartment blocks of the artists' colony were built as part of the urban planning concept of the "garden city", which was created before the First World War and was built around Rüdesheimer Platz from 1911 to 1915 . With the abandonment of courtyard development, this settlement concept represented a conscious alternative to the “tenement barracks”. The three apartment blocks of the artists' colony were designed by the architects Ernst and Günther Paulus . A fourth apartment block from Steinrückweg to Breitenbachplatz was planned from 1931, but construction was stopped by the National Socialist regime.

In the center of the residential complex, a large square (Ludwig-Barnay-Platz; formerly: Laubenheimer Platz ) was planned as a communication center. The interior design of the block was also intended to facilitate and encourage the residents to meet.

Time of the Weimar Republic

The artist colony quickly became a home for predominantly left-wing intellectuals and artists. The residents of the artists' colony, who mostly sympathized with the SPD and the KPD , represented a “red block” in the midst of a national-conservative and national -socialist environment.

The global economic crisis led to great unemployment among artists; around 75% of the residents were without income at the time. Many residents could no longer afford the rent, and GEHAG initiated evictions, which mostly failed due to solidarity resistance in the artists' colony. In order to represent the interests of the tenants and achieve rent reductions, the residents elected tenants' councils. The writers Karl Otten and Siegmund Reis and the actor Rolf Gärtner were elected . In January 1933, a rent reduction of eight percent was actually achieved, but the three tenants 'councils were given notice of their apartments on April 1, 1933. At that time, in the spring of 1933, around 300 writers and artists lived in the artists' colony.

Memorial for the politically persecuted of the artists' colony

After the " seizure of power " by the NSDAP in 1933, life for the residents of the artists' colony became increasingly dangerous. For the first time in February 1933, the SA , posing as "auxiliary police" or "protection police", carried out raid-like house searches and arrests. Almost three weeks after the Reichstag fire , as a result of which the National Socialists suspended the basic rights of the Weimar constitution with the Reichstag Fire Ordinance, a large-scale search and arrest of the artists' colony took place on March 15, 1933.

In the morning hours, the artists' colony was surrounded and cordoned off by the police and SA. Numerous apartments were searched by 3 p.m. Where there was no opening, the police entered the apartments using fire ladders. 14 people, including Theodor Balk , Peter Martin Lampel , Günther Ruschin , Manès Sperber , Curt Trepte and Walter Zadek , were arrested. An unknown number of foreign nationals who were unable to identify themselves were taken to police headquarters for identification. Several trucks full of files were confiscated, as were numerous weapons. Literature that the National Socialists considered communist or Marxist was brought to Laubenheimer Platz and burned.

Alexander Graf Stenbock-Fermor founded the resistance group Revolutionary Workers and Soldiers (RAS) in his apartment in the autumn of 1940 together with Beppo Römer and Willy Sachse . Further members of the RAS were Irene and Hans Meyer-Hanno , Fritz Riedel and Alja Blomberg . Stenbock-Fermor noted the work of the RAS in his memoirs: “We met alternately with me, in Alja Blomberg's apartment on the south-west parade and often with Meyer-Hannos on Laubenheimer Platz 2. Hans Meyer-Hanno and his wife Irene were the most eager Employees. “ Helene Jacobs and others hid politically persecuted people in their apartments.

It was not until 1952 that the artists' colony, which was assigned to the Reich Chamber of Culture in 1933 , returned to the possession of GEHAG. After 1952, it built “modern” new buildings for a fourth block of flats between Steinrückweg and Breitenbachplatz on the former expansion area of ​​the artists' colony. However, these did not follow the original building plan and can no longer architecturally express the community spirit of the colony.

For a long time after the Second World War , the difficult fate of the numerous residents of the artists' colony remained “invisible”. It was not until the 1980s that plaques began to be installed on the houses (partly from the Berlin memorial plaque series ). In 1988 a memorial was erected on Ludwig-Barnay-Platz. It bears a bronze plate with the inscription “REMEMBER FOR THE POLITICAL PERSECUTION OF THE ARTIST COLONY.” In memory of Hans Meyer-Hanno, who was murdered by the SS on April 22, 1945 in Bautzen , Ludwig-Barnay-Platz 2 a stumbling block embedded in the pavement. He had refused to fight for the National Socialists as a soldier.

In 1990 the garden city on the south-west parade was placed under monument protection. This also includes the artist colony, which makes up around 20 percent of the area. A good four years later, on December 31, 1994, the artists' colony was sold to Veba (later: Viterra , Deutschbau , Deutsche Annington , today: Vonovia ).

Many of the residents who had been expelled from the artists' colony returned after the war, some as guests. However, some also settled there again. For artists of the post-war generation, too, the artist colony is again attractive, today more for reasons of history than because of cheap living space.

A tenants' council represents the interests of today's tenants.

The association KünstlerKolonie e. V. was founded on December 13, 1987 and - after preparations by the artist colony since 1984 - entered in the register of associations of the Charlottenburg District Court under 9295 NZ on January 27, 1988 . The main goals of the association are the documentation of the history of the people and their works, the promotion of artists associated with the artist colony, the publication of writings and the organization of events. The association has an extensive archive of materials on the artist colony, consisting of photographs, newspaper articles and literature. The association publishes the magazine "KünstlerKolonieKurier" at irregular intervals. In accordance with its statutes, the association organizes street festivals - the so-called "Steinrückfest" in the garden of the Steinrückweg - and participates in the organization and promotion of events such as theater, opera and cabaret performances, concerts, painting and photo exhibitions, book presentations and readings, commemorative events .

In 1909, when the square was laid out, it was named after the municipality of Laubenheim in Rhineland-Palatinate . On November 1, 1963, the central square in the Laubenheimer Platz artists' colony was renamed Ludwig-Barnay-Platz . This is to remember Ludwig Barnay , who was one of the founders of the stage cooperative in 1870. Barnayweg had this function until 1940 .

On December 17, 1932, the path that closed off the artists' colony to the west was named in honor of Ludwig Barnay. On 21 February 1940 this way by the Nazis after 1929 late actor was Albert Steinrück in stone way back renamed. After the Second World War, there were plans to rename it back to Barnayweg , but they were never implemented.

In memory of the founder of the artist colony Gustav Rickelt , a private connecting route between the south-west parade and Kreuznacher Strasse in the new building area of ​​the 1950s was named in Gustav-Rickelt-Weg . The initiative to commemorate Gustav Rickelt came from his son Martin Rickelt , who also undertook the ceremonial unveiling of the street signs.