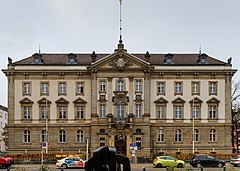 The building of the Charlottenburg District Court

The Charlottenburg District Court is that the Berlin district of Charlottenburg-Wilmersdorf in civil matters and consumer insolvencies competent district court . In addition, the court is the central register court for the State of Berlin, in which the trade , partnership , association and cooperative registers for Berlin are kept. It is also responsible for carrying out insolvency proceedings in Berlin, in particular for corporate and regular bankruptcies for natural persons , i.e. former self-employed .

These are Parent Berlin Regional Court and the Supreme Court .

The district court was established in 1877 with the coming into force of the Judicature Act . It was subordinate to the Regional Court Berlin II and this to the Berlin Chamber Court . With five judicial posts (as of 1880) it was the second largest district court in the district court.

Portions of this article appear since 2003 is out of date to be .
Please help to research and insert the missing information .

The building at Kantstrasse 79, a former criminal court

The listed courthouse takes up the entire block between the district court , Holtzendorffstrasse , Witzlebenstrasse and Suarezstrasse . Its oldest part was built by Poetsch & Clasen in the years 1895 to 1897 in the Brandenburg Baroque style for the "civil departments" at the time on the district court near Kantstrasse . In the years 1915–1921 it was expanded by the architect Schulz. The plastered building with a base made of Silesian granite and a main portal with a three-axis central projection surrounds a spacious inner courtyard.

For the criminal departments of the court at that time, an outbuilding in neo-Renaissance style with an attached prison wing was built in 1896/1897 according to a design by Adolf Bürckner and Eduard Fürstenau at Kantstrasse 79 , which was used alternately until 2010 (including land registry, most recently estate departments) and then for the purpose of selling the property for judicial use has been abandoned.

In the courtyard, a prison wing with red facings and rich architectural decorations was set up as a penal institution for young women and a criminal department of the district court. The prison was occupied by opponents of the regime between 1933 and 1945, and from 1939 exclusively by women. From 1942–1945, the prison was run by the welfare worker Änna Wieder, who was known for treating women humanely and granting perks.

Courts of the State of Berlin

See also : List of courts in the state of Berlin