After studying architecture from 1879 to 1883 at the Technical University of Charlottenburg , he passed the first state examination in 1884 and the second state examination with distinction in 1888. In 1887 he received an award in the Schinkel competition for his design of an “art academy and art exhibition hall in Berlin” with the motto “Bad as right” , and in the same year he won the “Museum of Fine Arts for a provincial town with 50,000 inhabitants” Great academic state award of the Prussian Academy of the Arts , which was linked to a scholarship for a two-year study trip that took him to Italy and the Orient from 1889 to 1890.

Fürstenau entered the Prussian civil service in 1890. He later carried the title of Government and Building Councilor and from 1905 headed the technical office of the building construction department in the Prussian Ministry of Public Works in Berlin. In 1916 he was transferred to the Prussian Academy of construction called and went to the 1927 retirement .

Eduard Fürstenau died in Berlin in 1938 at the age of 76 and was buried in the hereditary funeral of the Kochhann family in the Luisenstadt cemetery , because his wife was a granddaughter of Heinrich Kochhann . 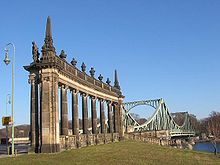 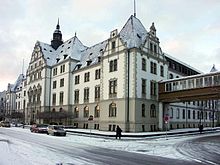 In the architecture museum of the Technical University of Berlin there are detailed plans for the above. realized buildings by Fürstenau. There are also six designs as part of the so-called “monthly competitions”, including a funeral chapel , a bathhouse or sketches to improve the situation of the [triangular] traffic island on the Potsdamer Bridge .