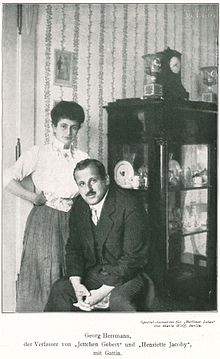 Georg Hermann with his wife, 1908. Photo by Marta Wolff.

Georg Hermann was born in Berlin in 1871 as the youngest of six children of a long-established Jewish family named Georg Borchardt . The chosen name Hermann was the first name of his father, "whose life and death was the hard life and bitter death of the hopelessly defeated." He should bring the father's name back to honor - so Georg Hermann when choosing his pseudonym.

The Egyptologist and archaeologist Ludwig Borchardt was his brother. Georg Hermann worked as a commercial apprentice and from 1896 to 1899 attended literary, art history and philosophical lectures at the University of Berlin. He later worked at the Berlin Statistical Office and wrote for forty newspapers and magazines, mainly for the Ullstein publishing house .

Georg Hermann was a widely read writer in the first third of the 20th century. His literary role model was Theodor Fontane , which earned him the name "Jewish Fontane". The novels Jettchen Gebert and Henriette Jacoby , which are set in Berlin in 1839/40 and paint a picture of the liberal spirit of that time in a Jewish family, were bestsellers at the time and together had more than 260 editions. His other novels did not achieve the same popularity.

Georg Hermann was a co-founder in 1909 and first chairman of the Association of German Writers from 1910–1913 , to which almost all prominent German-language writers soon joined.

Hermann moved the First World War to before the outbreak Neckargemünd .

Memorial plaque on the house at Kreuznacher Str. 28 in the Berlin artists' colony

Constantly threatened by the National Socialists, Hermann decided to leave Germany after the Reichstag fire in 1933. He went into exile in Holland with his two youngest daughters and his divorced wife . Georg Hermann's works were on the “black list” and were burned up in the book burnings in May 1933. In exile, under difficult economic conditions, Hermann wrote Die Zeit dies and three other novels.

After the occupation by the German Wehrmacht , he was forced to move from his place of residence in Hilversum to Amsterdam in early 1943 . From Amsterdam, Hermann was deported with his daughter from his second marriage, Ursula, and her son Michael to the Westerbork transit camp and, on November 16, 1943, to the Auschwitz concentration camp without daughter and grandchildren . The transport with 995 "Jews from the Westerbork camp" - 166 children, 281 men and 291 women up to 50 years of age as well as 257 elderly people - reached Auschwitz-Birkenau on November 17, 1943. Immediately after the selection at the "Alte Rampe" 531 people from this transport, including 72-year-old Georg Hermann, were killed in the gas chambers. The date of his death so far is November 19, 1943.

The park-like Georg Hermann Garden in Berlin-Friedenau is dedicated to the writer . This garden was inaugurated as a memorial in 1962. In his novel The Little Guest from 1925, Hermann lovingly described his former home, Friedenau, as an idyllic garden district and the “Eldorado of clay dwarfs”. The entrances to the garden are at Goßlerstrasse 24–25 and at Stubenrauchstrasse 6. The access at Bundesallee  79–81 now only leads to the Pestalozzi-Fröbel-Haus daycare center . A memorial stone for Georg Hermann has been set up in the garden, which is somewhat hidden on the fenced-in daycare playground. The memorial stone incorrectly names 1944 as the year of Hermann's death instead of 1943. In Potsdam, Georg-Hermann-Allee is named after him.

In: The Socialist Doctor