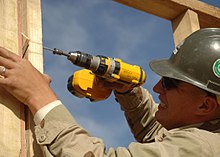 Drill drivers in use
Sound of a cordless screwdriver

A drill / driver is a motor-driven, drill- like tool for screwing and drilling ; if the drill / driver is battery operated , it is referred to as a cordless drill / driver . The devices are often equipped with a slip clutch , which decouples the drive from the work spindle when a preselected maximum torque is reached (the motor "spins"). Thus, a uniform tightening of screws can be ensured in the material without the screw head or material to achieve the target insertion depth (z. B. in alignment of the screw head with the material surface) can be damaged. In addition, it can also be ensured by means of an adjustable depth stop that z. B. Countersunk screws are screwed in flush with the surface.

Impact drilling means that the device has an impact mechanism that is used to quickly and regularly deliver an impact in the axial direction ("to hit the drill along its direction"). This is especially necessary when drilling into hard, brittle material (e.g. brick, poroton).

With hammer screws and similar impulse screws, a pulse-like ("hammered") rotary movement generates a higher torque on the screw. The electric motor can be briefly overloaded without overheating during impulse screwing, which results in a high torque despite the small design.

Drill have spread a two-speed gear : Slow for screws quickly for drilling.

In addition to the pen-type design, which is usually smaller in size and suitable for simple assembly work, the T-handle design has established itself. Older devices still have a pistol grip similar to a drill. Some drill / drivers are equipped with a small headlight, the so-called spotlight , so that they can also work in a dark working environment.

In older cordless screwdrivers mostly NiCd or NiMH cells are used, NiMH batteries can also be found in current (2011) devices in the lower price segment. Due to the low energy density of the rechargeable batteries at the time, devices with NiCd technology in particular are quite heavy and therefore limited in their handiness. NiMH cells have about twice the energy density of NiCd; LiIon batteries can double this again.

Since 2003, many well-known manufacturers have also been using lithium-ion batteries , which have a much better power-to-weight ratio . In addition, there are short charging times and very low self-discharge .

The primary parameters of a screwdriver are the maximum torque, the speed and, in the case of cordless screwdrivers, the capacity of the battery, measured in ampere-hours (Ah). Multiplied by the operating voltage ( volts ) results in the energy stored in the battery , so that a long operating time can be concluded from high capacity and high voltage with one battery charge. Therefore, operating voltage and capacity are often postulated as a quality measure.