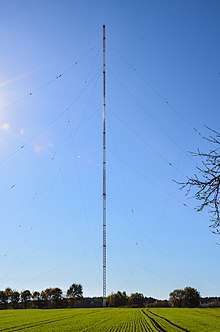 View from the thoroughfare to the reflector mast

The Donebach transmitter was a long wave transmitter in Donebach , a district of Mudau in the Neckar-Odenwald district . It was built by the Deutsche Bundespost and was last owned by Media Broadcast GmbH . From the start of operation on March 10, 1967 to January 1, 2015, it broadcast the Deutschlandfunk program , from 1975 on the 153 kHz frequency.

After the decommissioning, the two transmission masts were brought down on March 2, 2018 and the dismantling of the transmission system was initiated.

Construction of the plant

When Deutschlandfunk went on the air on January 1, 1962, only two transmitters were available to it:

By the end of 1962, the Deutsche Bundespost, which was responsible for broadcasting Deutschlandfunk, was also able to set up a longwave transmitter in Mainflingen that worked on the 151 kHz frequency , at the lower end of the longwave band  . However, this transmitter was only a temporary solution. The Bundespost finally found a suitable location on the plateau west of Donebach in the Odenwald. The over 500  m above sea level. NN high altitude former field airfield was ideally suited to cover West Germany and the GDR .

From 1965 to 1967 the first transmitter was built on the site and put into operation on March 10, 1967 on the 151 kHz frequency. An omnidirectional antenna consisting of four masts, each 200 m high, was used, the tips of which were connected to each other by taut ropes. The middle of these four masts was fed.

Limitations and renovations in 1972

The transmission on 151 kHz generated co- channel interference with the Brașov transmitter in Romania, which operates on 155 kHz . As a remedy, it was initially ordered to reduce the transmission power from the targeted 250 kW to 70 kW. Since, despite this measure, there was still co-channel interference, the transmitter system was rebuilt in 1972 so that the power emitted in the direction of Brașov was lower. For this purpose, two of the four transmission masts were dismantled and the two remaining masts were equipped with an umbrella-like roof made of hollow copper cables. The northwest mast worked as a radiator, the southeast mast as a reflector in the direction of Brașov. This enabled trouble-free operation with a full 250 kW transmission power.

In the Geneva wave plan of 1975, the Donebach transmitter was officially assigned the frequency 153 kHz. At the same time, new performance limits were set. During the day it was allowed to transmit with 500 kW and at night with 250 kW, whereby during the day a low and at night a strong fade out in the direction of Brașov had to be made.

In order to meet these requirements, two new transmitters for 250 kW output power with pulse duration modulation were installed in 1982 , which worked much more economically than the transmitters previously used. In addition, both antenna masts were raised from 200 m to 363 m. For this purpose, the masts were dismantled and rebuilt using new elements, with the old elements forming the upper parts.

Like the two transmission masts of the similarly designed system in Aholming, they were earthed constructions, the transmission power was fed in at a height of around 300 m via the holding ropes. At each of the radiating transmitting poles stood a Abstimmhaus , in the middle between the middle house . The masts were 600 meters apart, the directional angle from the transmitter to the reflector mast was 110 °.

After the increase, the two masts were the tallest structures in what was then the Federal Republic of Germany, after reunification they were moved from the 368 m high Berlin television tower to second place.

In view of the high operating costs with decreasing use, the commission for determining the financial needs of broadcasters (KEF) in its 18th report published in 2011 ordered the cessation of long and medium-wave broadcasting operations of public service broadcasters. That was a condition for the approval of funds for the further expansion of digital radio.

As a result of this decision, the Donebach transmitter was switched off on December 31, 2014, and some technical irregularities occurred (as in the Aholming transmitter in Lower Bavaria , which was switched off at the same time ), which extended the actual broadcasting operations into January 1st.

Initial plans to use the tall masts as supports for DAB broadcast systems were later dropped.

Since no economic re-use could be found after the shutdown of the long-wave operation, the two remaining masts were blown up on March 2, 2018.

From the shutdown to the blasting, the Donebach transmitter was the target of illegal roofing campaigns several times . The 363 m high masts were climbed without safety. Some also jumped down from the top with wingsuits .

The transmitter Donebach covered Germany with the exception of Eastern Bavaria, which was due to the necessary fade-out towards Brașov. He has also been received in Switzerland, north-eastern France, Luxembourg, Belgium, the Netherlands and large parts of Great Britain.

Geographical coordinates of the two most recently operated masts: