Aholming is a municipality in the Deggendorf district in Lower Bavaria in the Danube Forest region.

There are finds around Aholming from the Stone Age and the Bronze Age. In 1112 the place was first mentioned under the name "Auhalmingen", derived from the personal name Walchoun de Auhalmingen. The modern spelling has been documented since the middle of the 15th century. The place Hofmark became the Hochstift Passau early on .

Around the middle of the 13th century, Aholming came into the possession of the Wittelsbach family . In the second Duke's Surbar around 1280, the bailiffs of Aholming and Penzling already appear under the Hengersberg court . The last of the eponymous family, Heinrich von Ahalming, was mentioned in 1312. From 1363 to 1413 the Chamerau rulers over Aholming. In 1413 the knight Heinrich Notthracht von Wernberg bought it from the Chamerauer. Over 300 years, then ruled Notthafft over Aholming.

In 1553 the owners of the Aholming estate received the right to brew beer and hold fairs from Emperor Charles V. Aholming belonged to the Landshut Rent Office and the Natternberg Regional Court of the Electorate of Bavaria.

In 1821 the municipality of Aholming was formed. Until November 21, 1848 it was subject to the patrimonial jurisdiction of the Count Preysing zu Moos .

The Aholming transmitter was located in the municipality , a long-wave transmitter system for Deutschlandfunk that was dismantled in 2018 .

On October 1, 1971, the previously independent community of Neutiefenweg was incorporated. 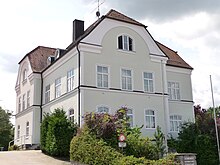 The local elections of 2020 and 2014 resulted in the following distribution of seats (in brackets the election result in percent):

In the community there is a local association of the CSU chaired by Herbert Gerl and a local group of free voters chaired by Theresia Friedberger. In November 2007, another independent electoral association called Bürgerblock Aholming was formed under the leadership of Martin Betzinger. The founding of an SPD local association failed because only four of the seven founding members required for it were found.

The first mayor has been Martin Betzinger (Bürgerblock Aholming) since May 1st, 2008; he was confirmed in office on March 15, 2020 with 55.52% of the vote for a further six years. The second mayor is Hans Reichl (CSU).

The coat of arms description reads: "In gold, a rising red wolf covered with a lowered blue bar ."

In 2017 there were 262 jobs subject to social security contributions in the municipality. Of the resident population, 1,041 people were in employment that was subject to compulsory insurance. This means that the number of out-commuters was 779 more than that of in-commuters. 20 residents were unemployed. In 2016 there were 46 farms.

In 2018 there were the following institutions:

Municipalities in the district of Deggendorf