The title of this article is ambiguous. Further meanings are listed under Metten (disambiguation) .
Template: Infobox municipality in Germany / maintenance / market

Metten is located in the Danube Forest planning region on the left bank of the Danube , where the foothills of the Bavarian Forest merge into the Danube plain .

Neighboring communities are Offenberg , Bernried , Grafling , Deggendorf and on the other side of the Danube Stephansposching .

Due to its location in Central Europe , the Metten market is in the cool temperate climate zone with winter hardiness 6–7. The market lies in the transition area between the humid Atlantic and the dry continental climate . 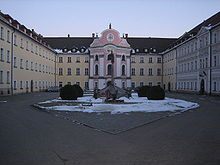 The Benedictine Abbey of St. Michael in Metten was founded around 766 and had been a royal monastery since 788. The place belonging to the monastery received in 1051 from Emperor Heinrich III. the right to hold a fair on the (then) three days of Pentecost and the feast of St. Michael with customs, ban and compulsion. Metten became part of the Duchy of Bavaria again after 1246, but formed a closed Hofmark under the local rule of the monastery until the secularization in Bavaria in 1803 . Based on the parish edict of 1818, Metten became an independent parish in 1818.

An alleged miracle healing in the hamlet of Mettenbuch in the spring of 1877 swelled the flow of pilgrims that had arisen on the basis of the descriptions of “miraculous-faced children”: over 100,000 pilgrims came over the year. Without church recognition, the Mettenbuch pilgrimage to the forest chapel of the “Comforter of the Sorrowful” lives on on a small scale to this day.

After the Second World War, the town of Metten experienced a sharp increase in population due to displaced persons and was promoted to market in 1966.

The local elections on March 15, 2020 (and by comparison the 2014 elections) resulted in the following distribution of seats:

In 2017 there were 881 jobs subject to social security contributions in the municipality. Of the resident population, 1622 people were in an employment relationship subject to compulsory insurance. This means that the number of out-commuters was 741 greater than that of in-commuters. 61 residents were unemployed. In 2016 there were 19 farms.

The following institutions existed in 2018:

Metten used to be the Bavarian starting point of the European pilgrimage route Via Nova , which leads to Sankt Wolfgang im Salzkammergut (Austria) and is integrated into the European network of long-distance hiking trails (current starting point: Weltenburg Abbey ).

Municipalities in the district of Deggendorf