Primitivo (in the USA Zinfandel , in Croatia called Crljenak Kaštelanski ) is a red wine variety originally from Croatia. The wines are characterized by a characteristically spicy aroma reminiscent of cinnamon, cloves, black pepper and dark forest fruits.

Around 1825, the nursery operator George Gibbs imported the Zierfandler grape variety from Long Island with various others from Gumpoldskirchen to the USA. The name Zinfandel probably comes from this time, as some authors suspect that the name Zierfandler was mistakenly assigned to a Crljenak kaštelanski package in the case of the broadcasts from Austria. According to Morris L. West, however, Colonel Agoston Haraszthy brought the ornament over from Hungary. Before Zierfandel reached California as Zinfandel, it was mainly grown as a table grape .

The European origin of the Zinfandel was searched for as early as the 1960s. The American plant pathologist Austin Goheen noticed the Primitivo on a trip to Italy, which he brought to California in order to be able to compare it with the Zinfandel. On the basis of his examinations based only on visible criteria, he suspected that the varieties were identical. Carole Meredith, professor of oenology at the University of Davis , was able to determine the identity of both grape varieties in 1999 by analyzing the DNA .

Since research had shown that the Primitivo grape had only been grown in Apulia for 150 to 250 years and that Zinfandel came to California in the mid-19th century, the question remained of where the common origin of both grape varieties could be found. Meredith and her colleagues had already followed indications in the 1990s that the grape variety could have originated in Croatia . They brought over a hundred different samples to compare, but none of them were identical. They did not find it until the end of 2001 in the old Crljenak kaštelanski variety. 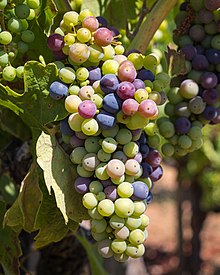 Zinfandel is mostly grown in California . Different wines can be made from it: red wine , rosé (Blush Zinfandel, mostly with residual sugar ) or a light Blanc de Noirs ( White Zinfandel , if fermented without skins). Zinfandel was one of the five most important grape varieties in the USA as early as 1919 and was popular both as a table grape and as a house wine during Prohibition . The vine has become so important that it is called a noble vine . With an increase from 13,200  ha to over 20,000 ha (in the years 1990 to 1998), it temporarily became the most widely grown grape variety in the USA. More recently it has been overtaken by the ' Cabernet Sauvignon ', but with 11% it is the second most important variety in American cultivation. The German pronunciation of the name of the variety is “Zinfandel” - as it is written - the American one differs somewhat in that the accent is placed on the last syllable. In the past, Zinfandel was not approved for cultivation in Germany; There have only been a few vineyards here for a few years. However, there are tiny remnants probably from around 1800.

The Primitivo grape variety is identical to Zinfandel (for more information, see the Origin and History section ), which is why Italian Primitivo winemakers sometimes market their wine under the better-known name of Zinfandel. The most famous Italian cultivation zone for Primitivo is Manduria in the Apulia region , where there is the DOC zone Primitivo di Manduria , but some excellent specimens are also sold under the IGT Primitivo di Puglia.

Maturation: medium early - around 20 days after those of the Gutedel . His maturity behavior is difficult. Unripe green berries can often be found under ripe grapes, so that they have to be picked by hand. In hot climates such as California, it is not possible to wait to reach full ripeness because this very quickly turns into overripe, which, even with small proportions in combination with noble rot, causes quality losses.

The variety does well in soils that are shallow. The grape variety is susceptible to gray mold rot ( Botrytis cinerea ), and it is often prone to severe trickling - the result is uneven yields.

Mali Plavac arose from a presumably natural crossing with Dobričić from the island of Šolta .