This article covers the city in Nigeria. For further meanings, see Kano (disambiguation) .

Kano is the capital of the Kano state in Nigeria . With 2,395,375 inhabitants (as of 2012), it is the fourth largest city in the country after Lagos , Ibadan and Benin City .

Kano is located in the north of the country, northeast of the city of Kaduna and approx. 440 km from the capital Abuja at an altitude of 488  m above sea level. M. The temperatures vary between 21 degrees Celsius in January and 31 degrees Celsius in April. The precipitation is mainly distributed between July and September, which begins and ends with violent sandstorms . The city and its surroundings are approx. 480 km from the southern border of the Sahara and lie in the eco-zone of the savannah . 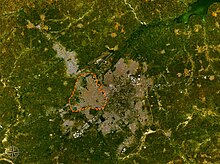 The city of Kano was founded in an unknown time. According to the Bayajidda legend of the Hausa , the founding hero Bayajidda , coming from Bornu , first reached Kano, where he had his sword forged, and then Daura . According to the local origin legend recorded in the Kano Chronicle , Bagauda is considered to be the founder of the local dynasty. The chronicle dates him to the 10th century according to the length of the government, but his second name Dawud / David and the names of his successors are to be interpreted as remnants of a pre-Islamic Israelite tradition. Also noteworthy is the firm involvement of the “pagan” Maguzawa or Azna in the early urban community, cited by the chronicle .

The chroniclers only set foot on solid local historical ground with their portrayal of Islamization by the Wangara traders from Mali during the reign of the Yaji (1349–1385). Sections of the civil servants offered bitter resistance to the new religion on the basis of the sacred kingship . Overall, the most important offices of sacred kingship continued in only slightly different form until the beginning of the 19th century: the Galadima was chairman of the State Council, the Madaki or Kaura leader of the entire army and the Sarkin Jarmai leader of the palace troops and the Maidaki the official queen mother and thus Patron of all important state affairs. It was not until Muhammad Rumfa (1463–1499) that Islam made its first significant progress. Under the influence of the North African scholar and preacher al-Maghili , he had a Friday mosque built on the site of the sacred tree . Furthermore, he introduced the Islamic custom of keeping women out of public space ( kulle ). In addition, however, the practice of sacrificing for the national Dirki shrine continued.

The jihad , proclaimed in 1804 by the Fulani scholar Usman dan Fodio in western Gobir , was followed by his tribesmen with his approval also against other house kings . After the conquest of the city by the Fulani in 1806 and the flight of King Alwali dan Yaji (1781-1807), the Fulani removed all important Hausa officials from their offices. This was followed by a rapid linguistic and cultural Hausaisierung of the ruling Sulleibawa-Fulani. In addition to the break in political continuity, the politically intentional Islamization led to a greater loss of tradition. Secular offices were deliberately restricted in their meaning in Kano as in other house states.

Kano remained a semi-autonomous province within the Sokoto Caliphate throughout the 19th century . As Heinrich Barth discovered during his month-long stay in the city in 1851, Kano was by far the most active craft and trading town of all the cities he visited in West Africa. He estimated the city had 60,000 inhabitants, less than half of whom were slaves .

In 1903 the British captured Kano and integrated the city into the Protectorate of Northern Nigeria . The modern administrative structures they set up restricted the king's power.

On January 20, 2012, Kano was attacked in a large-scale series of attacks by the Islamist terrorist organization Boko Haram . At least 191 people were killed. The police headquarters, three police stations, the interior ministry building and that of the state domestic secret service (SSS) were attacked with car bombs. 20 explosions are said to have been counted within a few minutes. After that, assassins disguised as police officers shot at the fleeing people. The population fled the affected neighborhoods in a panic. The governor of Kano state declared a 24-hour curfew. In addition, several thousand soldiers were sent into the city. On April 29, 2012, 15 participants in two Christian church services were killed by explosives and gunfire. On March 18, there was another bomb attack on a bus in Kano that left at least 20 people dead.

Kano was bombed again on November 18, 2015 when two young girls set off explosive belts in a busy shopping district, killing at least 15 people.

A forecast from 2014 predicts that the population of Kano will grow to 10.4 million by 2050. For the year 2100 it is expected to have 28.3 million inhabitants, which would make Kano one of the largest cities in the world.

Gate to the palace of the Emir of Kano

The clay remains of the former city ​​wall with a length of 19.2 km can be seen. Some of the former 18 city gates are reminiscent of the pre-colonial city. The great Emir's Palace and the Great Mosque of Kano still dominate the center of the city. The Makama Museum south of it is particularly accessible to visitors . The rides from parts of the city to the two major Islamic festivals, al-adha and hawan salla (id al-fitr) , which the emir participated in, caused a sensation .

Kano is regarded as the economic center of the north of Nigeria, but also as the least developed metropolis in Nigeria. The cityscape is characterized by traditional quarters in the old town within the old city walls and modern quarters in the north and west of the city. Kano received a road connection in 1906 and a railway connection in 1911. The Mallam Aminu Kano International Airport on the northern outskirts counted 2009 323.482 passengers a year, making it the largest airport in northern Nigeria and the fourth largest airport in the country.