Skal Labissière (born March 18, 1996 in Port-au-Prince ) is a Haitian basketball player who is currently on the Atlanta Hawks roster in the NBA . Before turning pro, Labissière played for a season at the University of Kentucky .

Labissière grew up in Port-au-Prince in his native Haiti . In January 2010 the island was struck by a severe earthquake . The family home was damaged and Labissière was buried under rubble. He sustained a leg injury from which he recovered within two weeks.

Shortly before the earthquake, the former Haitian professional basketball player Pierre Valmera came into contact with Labissière's family. Prior to his professional career in the United States, Valmera had played at high school and university levels, helping young talent from his homeland to make contacts in the United States. Thanks to Valmera's mediation, Labissière came to Tennessee in the summer of 2010 . Gerald Hamilton and his wife took over the tutelage of Labassière and Samuel Jean-Gilles, another basketball talent from Haiti. The two went to the Evangelical Christian School in Cordova. In 2014 Labassière moved to the Lausanne Collegiate School in Memphis and attracted the attention of numerous university teams with his achievements and great development potential . 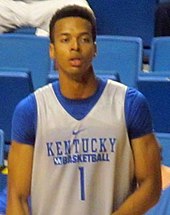 Labissière during his college days

Labassière opted for a scholarship offer from the University of Kentucky and against the offers from North Carolina, Georgetown, Baylor, Tennessee and Memphis, which had also courted him, among others.

He played for Kentucky in the 2015/16 season and recorded averages of 6.6 points, 3.1 rebounds and 1.6 blocked throws per game in 36 missions. After his freshman season for the blue and whites, Labissière decided against continuing his basketball career at university level and switching to the professional camp. He submitted his registration for the 2016 NBA Draft and was selected in 28th place by the Phoenix Suns , who then transferred him to the Sacramento Kings .

In his first season as a professional (2016/17) he was used in 33 NBA games and averaged 8.8 points and 4.9 rebounds. In addition, he gained match experience with the Reno Bighorns , Sacramento's partner team in the NBA D-League , and posted statistical averages of 14.9 points and 7.6 rebounds in 17 missions. In February 2019, Sacramento gave it to the Portland Trail Blazers in exchange for Caleb Swanigan . In early February 2020, Portland handed the Haitian over to the Atlanta Hawks .

NBA Executive of the Atlanta Hawks in the season 2019/20