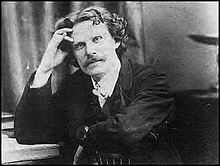 Daniel Dunglas Home (born March 20, 1833 in Currie near Edinburgh , Scotland ; † June 21, 1886 ) was a Scottish magician and a spiritualist medium , which is considered by followers to be one of the most important psychokinesis media of the Victorian era.

He gained his fame by performing apparently paranormal feats such as B. levitation of persons and objects, fire resistance and hallucinations . For over 35 years he astonished friends, acquaintances and interested parties, including the nobility and heads of state.

Daniel Dunglas Home was born in 1833 in Currie, near Edinburgh, according to his own admission, to the illegitimate son of the tenth Earl of Home. He claims to have inherited the " second face " from his mother .

Home grew up with his aunt, Mary Cook, as a slightly neurotic and ailing child. He did not learn to walk until he was six years old, and suffered from recurring paralysis, nervousness and amnesia. At the age of nine he emigrated to America with his aunt's family . At the age of 13, he is said to have dreamed of a ghost, which he interpreted as a bad omen regarding the fate of a friend who passed away shortly afterwards. Four years later he thought he was aware of the ghost of his dead mother, and when he noticed non-localizable knocking signs, he interpreted them as attempts at otherworldly contact by the deceased (see Poltergeist ). The aunt's superstitious family believed he was in league with the devil and kicked him out.

Home turned to spiritism , which was very popular in America during those years, and regularly held free séances . He lived on donations from his patrons. Home succeeded in astonishing the audience by inexplicable levitation of objects and people, knocking noises for no apparent cause and by touching them with invisible hands. So he quickly gained fame and reputation and decided to return to Britain. 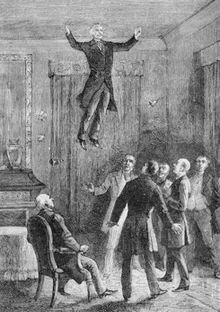 Home hovers before witnesses on August 8, 1852, drawing published in Les Mystères de la science (The Mysteries of Science) by Louis Figuier in 1887

Home returned to Britain in 1855 as a talented magician and medium. He is described as a cultivated, tall, slender man with blue eyes and auburn hair. In his shows, he performed his supposedly paranormal activities in daylight and demonstrated his telekinetic skills.

Early guests of his séances included the scientist David Brewster , the authors Edward Bulwer-Lytton and Anthony Trollope , and the socialist Robert Owen . Later he also held seances at the court of Napoleon III. from. Queen Sophie of the Netherlands writes about the experience with Home: “I saw him four times ... I felt a hand turning / pressing down my fingers; I saw a heavy golden bell moving alone from one person to another; I saw my handkerchief moving on its own and returning to me with a knot ... he himself is a pale, somewhat sickly-looking, rather handsome young man, but without an appearance that fascinates or scares you off at first glance would. It is wonderful. I'm so happy that I saw it. "

Princess Metternich tried in vain to expose his levitation experiments and Klopfgeistphänomenen as a trick, which Home also encouraged other researchers. Home did not allow his trade and trade secrets to be extracted, which did not prevent the poet Robert Browning from describing him after a séance in 1864 in a poem about a deceitful vain medium entitled “Mr. Sludge the Medium “ indirectly mocking rumors that Browning exposed Home as a fraud.

In 1866 the wealthy widow adopted Mrs. Lyon Home as her son and invested £ 60,000 in an ostensible attempt to gain prestige in high society. When she realized that this step did not help to improve her social position, she regretted her decision and obtained repayment from Home through a lawsuit in court. Despite the press, which was now making fun of him with glee, and the events that had taken place, he did not lose a single important friend.

Home met one of his best and closest friends in 1867, the future fourth Earl of Dunraven, the young Lord Viscount Adare . He was fascinated by Home and documented the séances at which he was present.

In December 1868, Home was seen by Lord Adare, Charles Wynn, and the Master of Lindsay fly out of a window on the 3rd floor of Buckingham Gate 5 and reenter the room through a window seven feet away.

In 1871 he visited Saint Petersburg, where he held seances in front of Tsar Alexander II .

Homes marriages, children and his death

In 1858 he married the 17-year-old daughter of a noble Russian family, Alexandria, Countess von Kroll in Saint Petersburg. She gave birth to a son, Gregoire, and a daughter who, however, died in infancy. In 1862 his wife died of tuberculosis . After her death, he tried unsuccessfully to get hold of the property.

In 1871 he married Julie de Gloumeline, an equally wealthy Russian lady whom he had met in Saint Petersburg . He converted to the Orthodox faith and spent his old age with her. His second wife was a relative of the leading Russian spiritualist Count Alexander Nikolajewitsch Aksakow (1832-1903).

At the age of 38, suffering from TB, he withdrew from public and professional life. On June 21, 1886 Home died of complications from advanced tuberculosis. He was buried next to his daughter in the St. Germain-en-Laye cemetery.

In 1891, a former Homes employee, who was supposed to be the "medium" on his shows, ruefully published his Revelations . Among the secrets disclosed was a description of the method Home used to carry glowing coals and bathe his face in fire.

Home, like many other media of his time in conducting direct voice séances in which the in trance replied medium spoke with the voice of a dead person of imposture transferred. A court found Home guilty of generating “ghost voices” and of cheating a woman from Lyon out of £ 24,000 .

Arthur Conan Doyle reports that at his "ghost shows" Home let the audience hear ghost voices, let ghosts speak through themselves in a trance , had clairvoyance and had physical bodies levitated . Home accused materialization media (such as the Eddy Brothers ) claiming to be able to materialize solid spirit forms of deception.

In 1877, Home described in two chapters of his book "Lights and Shadows of Spiritualism" in detail some of the tricks used by fraudulent media.

Frank Podmore, and later Milbourne Christopher , enumerated many ways Home could have achieved the effects mentioned in accounts of him through deception.

Contrary to the claims that Home conducts all seances with full light, other witnesses say that he worked in dim light: "The room was very dark ... Home's hands were just visible as a faint white pile."

The lighting conditions during Home's most famous levitation, the one where he floated out the window and back in again, was often debated. Some witnesses described that it was dark during these performances too. Lord Adare reported that Home "swung out and back in" in a horizontal position. “He (Home) came back in (through the window), feet first, and we returned to the other room. It was so dark that I couldn't see how he was being supported (outside the building) ”. Podmore also writes that Home worked with a partner who always sat across from him at the seances.

Between 1870 and 1873 Home was mainly observed by the physicist William Crookes , who carried out the investigations mostly in the light in his own laboratory. Crookes thinks he can vouch for at least 50 levitations. All tests were done in good light and for each levitation Home was at least five to seven feet above the ground. Podmore reports, "We all saw him rise from the ground to a height of six inches , where he stayed for 10 seconds and then slowly descended again."

In addition, Crookes checked the games that occurred suddenly and for no apparent reason, e.g. B. an accordion that played the melody "Home, Sweet Home" several times. He documented changes in the weight of objects and people and reported that once a hand came out of the tabletop and handed him flowers without noticing a trick device.

William Crookes carried out experiments on a total of three test subjects to check their credibility: Florence Cook, Kate Fox and Daniel Dunglas Home. In his final report he confirmed the authenticity of all three media. This result was considered worthless by the scientific institutions. The quality of the investigations is called into question in particular by the fact that Cook and Fox later turned out to be impostors, which Home and Crookes also admitted.

Professional trick experts also rubbed against Home: John Henry Anderson , the most famous British magician of his time, had chosen Home to be his mortal enemy, but could just as little explain its effects as John Nevil Maskelyne later . Four decades after Home's death, antispiritist Harry Houdini announced that he would copy its effects, but failed to do the same. Theories of trick technology are represented by Gordon Stein, whose book "The Sorcerer of Kings" (1993) James Randi contributed a foreword. Most of the effects of Home differed significantly from those of other necromancers and were not adapted by them. It remains completely unclear where Home, who came from a humble background, could have learned the art of deception, the quality of which endured before the critical eyes of scientists, magicians and the esoteric swindlers provoked by Home through his public trickery.