Levitation is a classic magician- performed illusion in which people or objects appear to be floating.

This type of illusion magic is mastered by means of threads, wires, rods or other aids that are difficult to see. 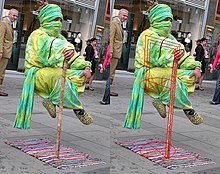 First reports of floating illusions tell of the "miracle man" Shesal, who "sat in the air" 120 centimeters high in Madras around 1830 . One wrist rested on an indefinable object that made contact with the earth. Jean Eugène Robert-Houdin corrected this illusion in his Paris Magic Theater in 1847. He gave it a time-related framework, pretended to numb his son with ether and let him rest in the air, only lightly supported by a staff. A little later , Alexander, a home citizen from Münster , showed “The Miracle of Hindustan or The Child Floating in the Air” in Guatemala.

A few years later, the Englishman Alfredo Sylvester , who called himself “Fakir of Oolu”, took away the supporting staff. The assistant was floating "free in the air". It is reported about Daniel Dunglas Home that he floated at séances, which he used to hold regularly as a guest in foreign houses. In 1860 the French magician Hamilton performed the illusion L'enfant enlevé par un cheveu in the Paris magic theater Robert-Houdin : he lifted a girl 40 centimeters high by one hair. In 1867 John Nevil Maskelyne let a person slide through the air for the first time in the Crystal Palace in London . In 1897, his son Nevil Maskelyne improved the illusion by making a person hover completely free in space and even running a tire lengthwise over him. The secrets of the feat were later stolen by the American illusionist Harry Kellar , who recruited Maskelyne's assistant for this. Kellar expanded the possibilities of the effect known in the US as the floating princess of Karnack or Kellar Levitation . Around 1900 the Berlin illusionist Otto Heinemann showed "Aga, the floating maiden". This free- floating illusion is still called aga-levitation by magicians today: an assistant lying on the table slowly floats up into the air. A tire can be pulled over it twice, while it then floats down again.

The other type of free floating is called Asrah levitation . In this illusion, invented by Jean Henri Servais Le Roy (around 1900), a person covered with a cloth rises, hovers in the air for some time and disappears when the cloth is pulled down. A variation of the aga levitation is the yogano-saturn levitation : a person standing directly on the ground (also a spectator from the audience) hovers 60 cm in height within a tire. This levitation can also be performed outdoors.

A phenomenon that is often perceived or presented as floating is often presented as hypnosis : Four people in a fifth, sitting on a chair, place their fingers under their armpits and hollow of their knees and try to lift them. This does not succeed in the first, typically uncoordinated attempt. However, if the magician ensures consonance by breathing or counting, the attempt will almost always succeed. The weight is evenly distributed among the four people. For a person weighing 80 kg, each person only lifts 20 kg. Uri Geller uses this method very often.