Recognized sources are incomprehensible, especially from the Esoteric section. That is irresponsible, especially with such topics. An undoubtedly serious opinion of recognized rational science on yogic flying would be tolerable under certain circumstances, but like now, as eso-spam, that does not work at all. - Invented Yeah-yeah-nää-nää 10:10, September 27 2012 (CEST)

Levitation , a form of psychokinesis , is the postulated ability of humans to levitate without aids.

Reports of this ability exist in just about every culture and also in today's mass media . There is no scientific evidence of successful levitation.

Levitation is mentioned in the Pali Canon . For example in the Sāmaññaphala Sutta (second discourse of the Digha-Nikaya ), in an enumeration of various "higher spiritual forces" (Pali: iddhividhā ). There it says " ākāsepi pallaṅkena kamati seyyathāpi pakkhī sakuṇosakuṇa " ( cross-legged through the sky like a winged bird ), or, as Neumann translates it, " to ride through the air sitting like the bird with its wings ". Levitation is one of the "fruits of the spirit aspiring hermit" (sāmaññaphala, also title of discourse ). 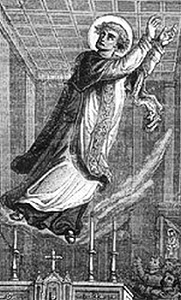 The best-known levitation in the Bible is attributed to the magician Simon Magus mentioned in Acts , Chapter 8, verses 9-25 LUT , who is said to have floated in Rome in a public miracle competition with Simon Peter in the first century . The mostly apocryphal sources about this incident were summarized in the Legenda Aurea in the 12th century . From then on, the flight and fall of the pagan Simon Magus became a popular motif in medieval art history.

Levitations are awarded to over 230 saints. Saint Theresa of Ávila mentions levitation experiences in her autobiography .

The most famous saint for levitations is the Franciscan Josef von Copertino (1603–1663), who came from a rural background. Scholars of the time found witnesses for over 100 flights. Many personalities were very interested in witnessing this miracle themselves . Among others, Princess Maria of Savoy and King John II Casimir of Poland have confirmed their observations under oath.

Other people who are attributed to levitation are Apollonius of Tyana , Girolamo Savonarola , Catherine of Siena , Peter of Alcantara and Alphons of Liguori .

The Scottish spiritualist Daniel Dunglas Home (1833–1886) caused a sensation with hovering and flying demonstrations, which he allegedly brought about with the help of ghosts . A fraud could never be proven to him.

An extension of the technique of Transcendental Meditation , which is based on the Yoga Sutras of Patanjali , is said to be levitation. The first stage is in the cross-legged to bounce up and down. The second stage of Yogic Flying is said to be a real levitation. However, more than the first stage was never verifiably achieved. Maharishi Mahesh Yogi , the founder of Transcendental Meditation, allegedly did not practice this technique in public on principle.