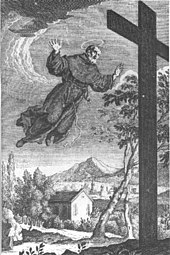 He is a saint of the Catholic Church . The popular saint (whose earlier popularity is comparable to today's Padre Pio ) is one of the most unusual figures in Catholic mysticism . Because of his alleged levitations in over 100 cases, he is also called the "Flying Frater".

Josef was born in 1603 as the son of Felice Desa and Franceschina Panaca in the Apulian farming village of Copertino. His father died before he was born. His childhood was marked by privation, illness and learning difficulties. He is said to have been miraculously healed of a serious illness in the Marian shrine of “Maria della Grazia” in Galatone.

In 1620 he became a novice in the Capuchin monastery of Martina Franca (near Taranto ), but was dismissed because he seemed unfit as a monk. In 1621, after several unsuccessful attempts in the Franciscan monastery of Santa Maria della Grottella, he was accepted first as an oblate , then as a frater .

In 1628 he was ordained a priest in Poggiardo and then held the priesthood in Copertino for 10 years, where he attracted attention through ecstasies , miracles and levitations and quickly attracted a large audience of pilgrims. In 1638 he was suspected of " messianism ". At a hearing before the Holy Inquisition in Naples, he was acquitted, but expelled from his community as a precaution.

He then lived in the Franciscan monastery of Assisi from 1639 to 1653 . In 1650 he met Duke Johann Friedrich von Braunschweig-Lüneburg there , whose conversion to the Catholic faith he is said to have significantly influenced. In 1653 he moved to the Capuchin monastery of Pietrarubbia , later to Fossombrone , and in 1657 to the Franciscan monastery in Osimo . He lived there until the end of his life in 1663. Joseph is buried in the basilica consecrated to him.

Josef is said to have experienced "ecstatic raptures" and levitations as a child. When he sat in his cell, it is said to have glowed as if large quantities of candles were burning.

In order to be able to think undisturbed, Josef climbed trees and was there close to the birds, which became very trusting. These birds are said to have followed him into the garden of the little chapel in which he read mass and did paperwork. Therefore the animal assigned to him is the goldfinch .

The brook Arroyo San José de Cupertino was named in honor of Joseph von Copertino (“Cupertino” in the local dialect) . The city of Cupertino in Silicon Valley in California was later named after this brook (now Stevens Creek ) .