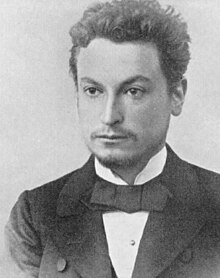 Karl Eugen Neumann (born October 18, 1865 in Vienna ; † October 18, 1915 there ) was the first authoritative translator of Buddhist scriptures into a European language and thus a pioneer of Buddhism in the West with his translation of large parts of the Pali canon into German and especially in German-speaking countries.

When Neumann was born in 1865, his father, Angelo Neumann , was a tenor at the Vienna Court Opera . His mother Pauline Aurelie geb. von Mihalovits was the daughter of a Hungarian noble family.

Neumann received his secondary education at the Thomasschule in Leipzig , since his father had become director of the Leipzig Opera in 1876 . After graduating from high school, he traveled to England and Italy . The young Neumann was much more enthusiastic about the writings of Arthur Schopenhauer than his banking apprenticeship began in Berlin in 1882 . From 1884 he immersed himself in philosophical writings, often for half a night, and showed great interest in the Indian sources which had also inspired Schopenhauer. He turned his back on his banking career and studied at the high school in Prague . In 1887 he began his studies at the Friedrich Wilhelms University in Berlin. Studying Indology with Hermann Oldenberg and Albrecht Weber , religious studies with Paul Deussen and philosophy did not meet his expectations.

Karl Eugen Neumann probably converted to Buddhism in 1884 and is believed to have been "the first Austrian to profess the teachings of the Buddha" and "as far as known, the first German Buddhist in the true sense of the word".

After his marriage to Camilla geb. Nordmann from Vienna went to Richard Pischel in Halle and received his doctorate in 1891 with a thesis on a Pali text for Dr. phil. at the University of Leipzig . In the same year he published the work in Leipzig: “Two Buddhist suttas and a treatise from Master Eckhart ”. In 1892, when he returned to Vienna, Neumann published a German-language anthology from the Palikanon on Schopenhauer's 104th birthday. In 1893 a version of the Dhammapada translated by Neumann was published . In 1894 Neumann's wish to travel to the country of origin of Buddhism was fulfilled. He stayed in India and Ceylon for a few months . There he also met members of the Sangha , such as the monk Sumangala Maha Thera and Lama Dondamdup. Although he valued the knowledge and learning of some monks very much, some things seemed to him to be a falsification and dilution of the original Buddhist teaching. Returned to Vienna in the autumn of 1894, he devoted himself to studying and translating the Tipitaka and accepted a post as an assistant at the Orient Institute with the Indologist Georg Bühler .

The next few years were marked by the translation activity of the “ Middle Collection ” and its publication in three volumes in Leipzig and Berlin (1896–1902). It was during this time that the keen correspondence and friendship with the congenial Giuseppe De Lorenzo (1871–1957) from Bari fell, who also published Italian translations of Neumann's work and became a pioneer of Italian Buddhism. After a brief interlude in Germany, Neumann returned to Vienna in 1899 and translated “The Songs of the Monks and Nuns”. In 1906 Neumann lost his entire fortune in a bank crash and even had to (temporarily) sell the highly esteemed Siamese edition of the Tipitaka , which had been bequeathed to him by the Siamese king . The inheritance after the father's death resolved the financial emergency for the time being. In 1907 Piper in Munich published the first of three volumes in the “ Longer Collection ” (completed in 1912).

Although Neumann deserves the credit of being the first to translate very extensive parts of the Pali canon into German and thus to have had a broad impact on the Buddhist movement that was forming in the German-speaking area, his translation is now philologically controversial due to a lack of precision in detail.

A complete edition of his work was published in 1957 by Paul Zsolnay Verlag in Vienna. The increasing interest in Buddhism in the German-speaking area brought a new edition of the Neumann translations of the Palikanon by Beyerlein and Steinschulte and in 2003 the digital edition of the complete works was published by Directmedia Publishing (digital library).