Spirituality , the relationship to the immediate environment and the inclusion of all things in the "big picture" are essential characteristics of wild thinking

The term wild thinking ( French pensée sauvage ) was coined by the ethnologist Claude Lévi-Strauss . He named the ways of thinking of cultures living close to nature , which are based on traditionally holistic and mythically explained worldviews . All beings, things and phenomena are connected to one another through an all-encompassing, magical connection that is not based on abstract and rational considerations. Rather, this thinking is the imaginative combination of “fragments” of sensual perception and past events, which are processed into concrete images and stories with the help of the imagination. Lévi-Strauss called this improvising procedure bricolage ("handicraft").

Nevertheless, after extensive cross- cultural research, he came to the conviction that there was no essential or qualitative difference in the logical structure of modern and (supposedly) primitive thinking. Both ways of thinking are only variants of one and the same principle of ordering the world according to a universal procedure.

The term “wild thinking” is also used in modern art .

Lévi-Strauss recognized in the formation of opposites ( dichotomies ) such as "man - woman", "old - young", "small - large", "cold - hot" the basic pattern of any categorization that all people - regardless of their cultural affiliation - apply. He assumed that the most diverse worldviews can therefore be translated into modern language and compared.

Building on the principle of opposites, a large variety of different attempts to "order the world" developed. Although they differ greatly in terms of their terminology, their structure is based on the same principle. (A comparison with architecture is useful for a better understanding: All buildings have a foundation, load-bearing walls and a roof. The basic structure is therefore always identical, although you can build huts and skyscrapers, factories and churches from them.)

Lévi-Strauss assumed that “wild thinking” would experience a renaissance in modern industrial societies. The structural logic is particularly recognizable in cybernetics and computer technology. Nevertheless, he also pointed out the differences between so-called “primitive” and modern thinking, which are to be sought above all in their relatedness.

The differences to modern thinking

The eagle hunt of the Hidatsa : This strongly ritualized act sanctified the antithesis of "heavenly and earthly", in that man went into the earth to catch the highest heavenly being with his hands.

Scientific thinking is mostly practice-oriented, based on empirical evidence, is primarily related to the objects and mostly concludes from the individual to the whole ( reductionism ).

In contrast, mythical thinking is often without direct practical relevance, is based on unprovable combinations of the most diverse observations, is primarily aimed at the harmony between the objects and subordinates the individual to the “big picture” ( holism ).

This tendency corresponds - according to Lévi-Strauss - to the passion that can be found in all natural religious cultures, to accommodate all things and events from the plant and animal world to moral terms such as “good and bad” in cleverly devised, huge classification systems. The undervaluation of the practical is reflected, however, in a careless handling of the things themselves. For example, systematics like this would arise: the opossum hops, the frog hops - so the frog is the father of the opossum. Or: The eagle is related to lightning, lightning to fire, the fire of coal, the coal of the earth - so the eagle is a master of coal and an "earth" animal.

Order is the result of ever new combinatorics and association , not the result of abstraction and deduced rational principles such as causality .

The following table compares the characteristics of the two ways of thinking in a simplified and “polarizing” form in order to make the differences “more understandable”:

The advantage of wild thinking

Levi-Strauss did not see the savage mind as un -conscious yet un at reasonable conception of reality. He was convinced that it was superior to western thinking to make the interweaving with nature tangible and to let this flow into daily life. This is achieved through the complex connection of the cultural order patterns (people, tribe, clan, family, clan, etc.) with the classes of unchangeable nature (animals, plants, stars, rivers, mountains, etc.). Although someone who is a member of the bear clan, for example, has to submit to a system of special rules of life and taboos, he also feels himself to be part of the unchangeable and indestructible cosmic order.

The following are a few selected examples of "wild thinking", which western thinking can understand quite well, from Lévi-Strauss' book of the same name:

Thunderbird (declaration of the world)

A vivid example of wild thinking is the mythical thunderbird of many North American natives: Due to the fact that the thunderstorm season of the year begins in the same month in which the migratory birds return - and also ends when the migratory birds fly north again, the Indians have established a mythical-logical connection between the two phenomena. The thunderbirds are the rulers of the heavenly world. They generate the lightning with their eyes, their language is the rumble of thunder and the approaching cloud front represents their bodies. This creates a symbolic explanation for the change of seasons and the connection between heaven and earth with a catchy personification for the forces that cause these phenomena.

Yurlunggur (declaration of the world)

While a modern precipitation diagram of Arnhem Land in Northern Australia is highly abstract and requires various knowledge in order to interpret it correctly, the representation of the local climate in the myths of the Yolngu is extremely concrete and easy to understand:

A young woman desecrated the holy water of the watering hole where the python Yurlunggur lived with her menstrual blood. The snake came out indignant, straightened up and caused a downpour that overflowed the waterhole and caused a great flood. As long as the line remained upright, rain and flooding continued. It was only when she lay down again that it quickly became dry again and life returned.

In fact, in Northern Australia, an intense dry season is regularly followed every year by an intense rainy season with heavy rainfall and spring tides that flood the country several dozen kilometers into the country. During this time there is only an insecure and limited food supply for the Yolngu, who have to withdraw to higher ground. In the transition period, on the other hand, there is abundance and life. If you look at the entire myth, the relationship to human life becomes clear: the menstruating woman symbolizes the still “impure”, inferior femininity that still needs to be fertilized, while the rain symbolizes the fertilizing, pure and superior masculinity.

After the Gahuku-Gama people from New Guinea had learned to play football, it was immediately ritualized: While championships in the western world serve to determine a winner, these people play so many games until an absolute tie has been reached. Here the great relationship of wild thinking to symmetry and harmony becomes clear. 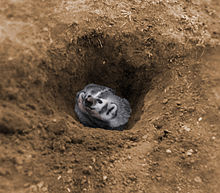 What does a badger den have to do with the birth canal?

During pregnancy, the women have the catch from Gabon avoid any contact with animals living in underground construction or tree holes. It is feared that the ability of these animals to take refuge in caves in danger could pass to the fetus. This would then cause a difficult and risky birth as the child would rather stay in the abdominal cavity than be born. This is one of very many examples in which a direct relationship between human life and animal behavior is “tinkered with”. So wild thinking also creates many imaginative, magical connections that are completely irrational from a scientific point of view. Often, however, other points of view can be identified that make even such superstitious ideas seem reasonable. In this example, it is the psychological fact that the introduction can reduce the fear of childbirth in young women. It suggests that something can be done about a (actually unpredictable) difficult birth. Some elements of modern birth preparation courses have a comparable effect.

Cave painting from France with an indefinable human-animal hybrid

The Canadian anthropologist Diamond Jenness (1886–1969) noted the following statements from an informant of the Carrier Indians in an interview :

“We know what the animals do, what the needs of the beaver, the bear, the salmon and other living things are, because the men married them in the past and acquired this knowledge from their animal wives… The whites have in this country only lived briefly ...; but we have lived here for thousands of years, and the animals themselves taught us a long time ago. ... "

Such relationships to animals or plants can be found in very many indigenous worldviews in the most varied of varieties. They underpin traditional knowledge - which is usually characterized by extensive biological and ecological knowledge - with a deeply felt, emotional foundation. Other examples are clan affiliations (leopard clan, wolf clan, corn clan u. V. A.) Or individual totem animals in which certain characteristics or behaviors of these non-human beings are taken in different ways in the cultural repertoire of behavior. The names for animal species, the medicinal properties of plants, visual similarities between human body parts and living beings, or the transfer of natural patterns of order to the social fabric also create such relationships with the environment. In this way, many peoples living in nature create a complex interweaving of all areas of human life with nature.

Critics accuse Lévi-Strauss that the translation and interpretation of thought structures is often too speculative and also distracts from the everyday reality of the communities examined. In addition, some authors doubt the formation of pairs of opposites as a basic pattern of any categorization, so that there is a risk of being deceived by structural abstractions.