Chisels are tools for machining wood . Generally, a distinction in the craft coarser chisels and finer chisel , though the shapes are similar and define the standards differently.

Chisels consist of a handle made of wood or plastic with a metal ring each, both at the upper end (brass knuckle) and at the lower end (ferrule), and the blade is made of polished and hardened steel .

Chisels and chisels have the same structure. They consist of a blade made of tool steel with cutting edge, brass knuckle and ferrule. The ferrule prevents the blade from penetrating the handle. The impact ring is used to attach the booklet. The end of the steel has the ground cutting surface with which the wood is processed in horizontal motion. So that the force of the blow is optimally transferred to the cutting edge, the extension of the central axis of the handle must run exactly through the axis of the chisel.

The processing of the wood is done taking the grain into account . In vertical movement into the wood, which has to overcome the resistance of the grain of the wood, is usually worked with a hammer . This usually occurs with precisely fitting inlet work. While the chip is cut flat from the wood with the chisel in places that are to be deepened in a straight line, a hollow can be worked out with the chisel.

Stone chisels for woodworking from the funnel beaker culture around 4100–2700 BC.

Roman chisels from the 1st / 2nd c. Century with a reconstructed handle 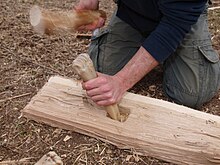 Man with gouge in Archeon

Chisel-like tools for performing fine woodwork are known from archaeological finds since the Neolithic. Initially, devices made of bone or antler material were used , later also chisel-like tools made of stone. Eventually, with the advent of metals, gouges were made from bronze in the Bronze Age and from iron and steel since the Iron Age . The shapes of the gouges were optimized very early to such an extent that they changed little until modern times. Thus, the early forms of Metallbeitel had a Tüllenschäftung up and down Roman times, the reinforced with a metal ring sat more and more scarf joint on a spike through.

Chisels and chisels are tools to chisel and stinging.

According to DIN  5139, a distinction is made between shape  A with straight edges and shape  B with beveled edges in cross-section. The beveled edges of shape B enable sharp corners, e.g. B. the tines .

The gouges or gouge is used to Nachstechen round depressions or for finishing of flutes. It is often used in musical instrument making , especially in violin making . It has an almost semicircular blade in cross-section and is used to cut out concave recesses, but is also suitable for linear and flat work. According to DIN 5142, they are manufactured in radii from 3 to 25 mm and in widths from 6 to 32 mm. The iron is sharpened from the outside in. A distinction is made between straight and curved gouges.

The edge chisel is a tool used by Wagner and carpenters . It resembles a chisel and is used to chisel out very deep holes. The name edge chisel comes from the edge running in the direction of the axis, which is formed by two inclined surfaces, which significantly increase the effect of the tool.

Also Drechsel beitel or moving iron can not be used with a hammer, but at the lathe for cutting rotating pieces of wood. The shape is also different. There a distinction is made between chisels with a straight cross-section and tubes with a semicircular cross-section - there are also a large number of special shapes, especially for the leisure sector. The handles do not have a metal ring at the back and are sometimes very long, depending on the shape and size of the blade, 70 cm and more. Often turning chisels or moving irons are sold without a handle, and the handle is made by the turner himself according to his own ergonomics and working method.

Japanese chisels represent a special group of chisels as they consist of two layers of material: The cutting edge is made of hard, brittle carbon steel , the carrier layer, which merges into the shaft (tool) , is made of softer steel . The carbon steel is very heat-sensitive, so that these irons cannot be honed on conventional bench grinders, but can only be sharpened by hand on sharpening stones or on water-cooled systems. If the iron overheats, the steel glows out and becomes unusable. Japanese irons are generally struck and usually supplied with round handles and round knuckles, which usually have to be opened before being used for the first time. In addition, a hollow is ground in the mirror surface in order to be able to pull off more quickly and precisely.

Chisels have to be sharpened more or less frequently, depending on the tool, type of processing and the wood being processed. The time intervals between sharpening, i.e. the operating time, is called the service life of tools . In general, the following applies: the better the surface quality, the longer the service life.

As long as no tears are visible on the cutting edge, a simple "peeling" on water stones with a grain size of 1000–8000 is usually sufficient. To do this, the mirror surface is first peeled off until it is flat. Then the bevel is honed until the surface is smooth and the cutting edge straight. This is repeated with increasing grain size from 1000 to 3000 to 6000 until the desired sharpness (edge) is achieved.

As soon as major damage is found or another angle needs to be sanded, it must be re-sanded. Dry grinding processes on bench grinders or pendulum grinding machines as well as water-cooled grinding systems such as cup or face disks and water-bearing round stones are suitable for this. Some chisels are very sensitive to heat, so dry grinding is not possible. Even sturdy irons can burn out if they are improperly regrinded.

The bevel angle (cutting wedge) of the iron is selected depending on the type of iron, type of processing and hard or soft wood and cross / longitudinal / end grain processing and the desired service life. A standard angle for working medium-hard wood by hand is 25 °. If the iron is struck, the angle becomes more obtuse, if end grain is processed, the angle becomes more acute. There are various sharpening aids for setting the angle, which fix the iron and hold the set angle.

The terms chisel and chisel are also used interchangeably by laypeople, contrary to the technical terminology.