The chromatic aberration ( Greek χρωμα chroma , color 'and Latin but rare , digress'; in the photograph often abbreviated to CA) is an aberration of optical lenses caused by the fact that light of different wavelengths or different color is greatly broken. In addition to a chromatic difference in magnification , this leads to the lateral color error , which is particularly evident at the edges of the image in green and red or blue and yellow color fringes at light-dark transitions, and the longitudinal color error in the form of different discolorations in front of and behind the focal plane.

The extent of light refraction ( refractive index ) through a medium depends on the wavelength of the light ( dispersion ). As a result, short-wave light (blue) is usually refracted more strongly than long-wave light (red), and light that previously appeared white is broken down into its spectral colors . This effect can be seen particularly clearly with the prism . 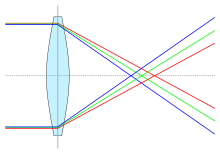 Chromatic aberration of a converging lens

Longitudinal color errors with open aperture: purple colored edges in front of the focal plane, green behind it

Longitudinal color errors reduced by stopping down, the transverse error is retained

This error can be corrected by combining lenses made of glasses of different dispersion. If the most strongly deviating wavelengths are brought together, one speaks of an achromatic correction or an achromatic lens , which means that the system has the same focal length for both colors.

If the focal point for the color green is also merged with the other two, it is an apochromatic correction . This corrects the lateral chromatic aberration. This is only possible with very high quality - and correspondingly expensive - optical systems, such as an apochromatic objective. Such lenses often, but not always, have the abbreviation “Apo” in their name.

Longitudinal color errors can be reduced by stopping down the lens. In the case of lateral chromatic aberration, the relationship between the aperture and the extent of the defect is less clear and differs from lens to lens.

An apochromatic objective that should compensate for this has a larger number (4–6) of individual lenses made of different types of glass. They have the same back focal length for the wavelengths (480 nanometers = cyan, 546 nanometers = yellow-green, 644 nanometers = red).

In digital photography, lateral color errors can be subsequently reduced using electronic image processing by scaling the different color channels of the image differently. The camera manufacturers' RAW converters often offer corresponding automatic functions. Digital cameras increasingly support a corresponding correction directly, but sometimes only for cameras with interchangeable lenses for lenses from the same manufacturer. Newer digital camera systems , such as the Micro Four Thirds system , individual properties can all lenses of the camera system, such as the characteristics of the lateral chromatic aberration, transferred to the camera body, which an automatic digital compensation this aberration in the camera or in the subsequent image processing allows .

The atmosphere also falsifies the color rendering, since both the absorption of light by the air and the refraction of light depend on the wavelength. Although the human eye system interprets the characteristic blue coloration of distant objects as depth information, in the case of optoelectronic sensors it should be dissuaded as a correction. Furthermore, with stars close to the horizon and with atmospheric halo appearances, a vertical color fringing often occurs because the astronomical refraction is different for red and blue light components.