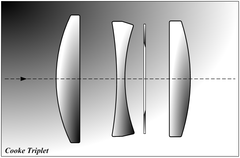 The Cooke triplet is a three- lens lens that corrects chromatic aberration for two wavelengths as well as astigmatism . Triplet stands for triplet , triplet or Dreilinser . The Cooke triplet is a classic lens construction . It was first described by Harold Dennis Taylor in 1893 and named after his employer, the Thomas Cooke & Son company . However, Ernst Abbe registered a patent for a triplet construction as early as 1890 .

The name alludes to the composition of three free-standing lenses. Usually a triplet consists of two collecting outer members (made of crown glass ) and an inner diffusing member (made of flint glass ). The combination of the first two lenses results in a very long focal length. This long focal length is shortened again by a third lens at a greater distance. The chromatic aberration is corrected for two wavelengths. The Cooke triplet is therefore an achromatic lens system.

The diaphragm of a triplet is almost always attached in the immediate vicinity of the central diverging lens. In projection lenses, the diverging lens is often kept so small that the correct light intensity is obtained without an aperture . Sometimes even part of the lens surface is blackened at the edge in order to reduce light intensity.

From a historical perspective, glasses with an ever higher refractive index were used for the two outer crown glass lenses . This could significantly increase the light intensity, image angle and correction. The first triplets had a light intensity of 1: 6.8. It was able to be increased to 1: 3.5 via 1: 4.5 in the late 1930s. After the Second World War , triplets with a light intensity of 1: 2.8 were used because new types of glasses with improved optical properties were now available. The outer crown glass lenses were initially made of glass types such as SK16 ( n = 1.62), later made of LaK8 ( n = 1.71) and finally of LaFN21 ( n = 1.79). In particular, crown glasses containing lanthanum oxide with a very high refractive index and comparatively low dispersion are used today (e.g. Schott glass LaFN21).

The construction of the triplet is still not suitable for large angles of view ( see wide-angle lens ), even with the optimal choice of glass types , because here - as with greater light intensities - the imaging errors can no longer be brought under control. The coma and astigmatism are, however, with a moderate opening width (initial light intensity ) - d. H. today usually up to 1: 2.8 - usually well corrected. Lenses based on the Cooke triplet were therefore also marketed as " anastigmats " (in addition to lenses of other types) . One example is the Novotrinast anastigmat , which is used as a projection lens for the Liesegang “E8” episcope .

In the case of derived lens types (see below) with more than three lenses, individual lenses are often replaced by cemented elements (see e.g. Tessar and Heliar ).

According to Gross et al. (2008) a Cooke triplet made of thin lenses has eight degrees of freedom for the correction of aberrations : Each of the three spherical lenses has two radii. There are also two lens pitches. These degrees of freedom are sufficient to eliminate the five monochromatic aberrations of the third order and the two most important chromatic aberrations as well as to set the desired focal length . A lens system without a field curvature can only be achieved with a suitable choice of glass types.

According to Gross et al. (2008) set out a series of design guidelines that lead to a usable triplet.

The triplet quickly developed into the standard construction in lens construction, especially for inexpensive cameras. For decades, almost every compact viewfinder camera had a triplet lens with a fixed focal length . Examples of classic triplet lenses are

The use of Cooke triplets as a lens for the projection of slides is widespread . Well-known examples of traditional German manufacturers are the Patrinast by Ed. Liesegang oHG , the Stellar from Staeble-Werk , the Projar from ISCO Göttingen , the Diaplan from Meyer-Optik (Goerlitz), the Maginon from Will, Wetzlar , or the Diarectim from Rathenower Optische Werke . The most common light intensity is 1: 2.8 with a focal length of 85 to 90 mm.

The projection of opaque templates by episcopes and epidiascopes is also mostly done by lenses in the style of the Cooke triplet. Some of the lenses are very large. The Novotrinast anastigmat built into the E8 episcope by Ed. Liesegang oHG , for example, has a lens diameter of 10 cm (light intensity 1: 3.6) with a focal length of 330 mm. The "Meganast anastigmat" from the same company, which is intended for even larger projection tasks, achieves lenses with a diameter of almost 20 cm at 1: 5.6 / 1000 mm and a weight of around 7 kg.

The five-lens Heliar was developed by Voigtländer back in 1900. In the classic Heliar, both the front and rear lenses were replaced by an element made up of two cemented lenses. Another type of lens derived from this is the Tessar developed by Zeiss in 1902 . Here only the rear element consists of two cemented lenses. The Primoplan from Meyer-Optik was a five-lens, bright triplet variant.

The Ernostar and the Sonnar from Zeiss are further, strongly derived types .