1900 Heliar (above), later version known as the Color-Heliar or Dynar (below)

Heliar is the name of a five-element lens that was patented in 1900. It was developed by Hans Harting for Voigtländer .

The Heliar is a further development of the Cooke triplet . In order to reduce the aberrations , Harting replaced the individual lenses at the front and rear in the triplet type with cemented groups of one collecting lens and one scattering lens. In the first design, which was patented in 1900, the diffusing lenses were on the outside. Harting himself changed his design by moving the diffusing lenses inwards. This made it possible to reduce the aberrations a little better. This structure was given the names Dynar or Heliar .

The Tessar calculated by Paul Rudolph in 1902 was simpler than the five-lens Heliar . Here only the rear element consists of two cemented lenses. Compared to the Heliar, it is cheaper to manufacture and easier to provide with a high light intensity with good sharpness.

The Heliar (from ancient Greek Helios - sun) was highly praised for its balanced figure. The "soft" image with a large aperture made it a valued lens for landscapes and portraits. The “softness” was caused by an incomplete correction of the aberrations astigmatism and coma. It decreases when the lens is stopped down.

Completely corrected designs of the Heliar type were not available from Voigtländer under this name (only from the manufacturer Cosina in 2001). The sharp image with soft contrasts was considered a special quality feature of this type.

Different variants were made as Heliar , Dynar and Color Heliar . They were used in roll film folding cameras of the Bessa type, typically with 105 mm f / 3.5. Various versions were also produced for large format cameras, for example for the Voigtland running floor cameras of the Bergheil type for sheet film . Here the focal length went from 150 to 420 mm, the light intensity was f / 4.5.

In the early 1950s Voigtländer brought out a special Heliar for portrait photography. The particularly "soft" (= blurred) image of the original design from 1900 was used. In addition, the center lens could be moved along the lens axis to control the degree of soft focus. It was available for medium and large format cameras.

The Apo-Lanthar from 1952 represents the highest stage of development of the Voigtlander Heliar . The structure of the Apo-Lanthar corresponds to the Color-Heliar . By using special types of glass, the Apo-Lanthar became the first apochromatically corrected lens for medium format. It has earned a legendary reputation for excellent imaging performance. For marketing reasons, it did not appear under the name Heliar , and they did not want to endanger the Heliar's special reputation for "fragrant hotness". The Apo-Lanthar was also only available for medium and large format cameras .

After Voigtländer was taken over by Zeiss-Ikon in 1956, the company soon concentrated on the 35mm format. The further development of these lenses was stopped and the production slowly came to an end.

From 1952 to 1962, Asahi Pentax had a small picture lens of the Heliar type in its range. The Takumar 58 mm, f / 2.4 was the first Heliar for the 35mm format and exceptionally bright for this type of lens. It was produced with M37 and M42 thread connections. This type was omitted from the range of Auto Takumar lenses for Pentax cameras presented in 1958. The market demanded fast lenses, the special properties of the Heliar type were now less in demand.

All Pentax 100 mm f / 4 macro lenses were of the Heliar type (five lenses in three groups). These were produced until 1989.

Kodak used the Heliar type for some lenses in the Ektar series, and Nikon is said to have also used this type of lens. Mamiya used this type e.g. B. for the 105 mm f / 3.5 lens the twin-lens reflex. Leitz had lenses of the Heliar type under the name Hektor in their range, for example the Hektor 28 mm f / 6.3. 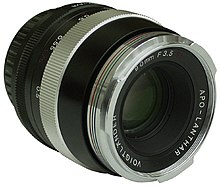 Cosina / Voigtländer "Apo-Lanthar" -f / 3.5-90 mm lens for 35mm cameras . The construction is not comparable to the original Heliar construction.

The Japanese company Cosina has been a licensee of the Voigtländer brand and various product names since 1999 . Cosina has different cameras and lenses under the old names e.g. B. Heliar (Super Wide Heliar 15 mm f / 4.5, Ultra Wide Heliar 12 mm f / 5.6, Color Heliar 75 mm f / 2.5) and Apo-Lanthar (Apo-Lanthar 90 mm f / 3, 5) brought out. The lenses from Cosina belong to different lens types than the eponymous products from Braunschweig production. With a few exceptions, only the licensed names have been adopted.

In 2001 a limited anniversary set “101 Years of Heliar ” came onto the market. The set contained a newly calculated collapsible Heliar 50 mm f / 3.5 with a matching viewfinder camera. The basic structure of this lens corresponds to the original Color Heliar . It was praised in photo magazines, it is clearly one of the best that has ever been tested.

For the 250th anniversary of the Voigtländer brand name , limited anniversary sets were again issued. These sets contain a Heliar Classic 50 mm f / 2.0 (can be pushed together again, again in the structure according to the original Color Heliar ) and a suitable viewfinder camera. The Heliar Classic is the fastest lens of this type to date.