It was founded in 1940 by Seichi Mamiya and its product range focuses on medium format cameras for professional photographers and ambitious amateurs . The parent company, which in addition to photo products also manufactures golf clubs and various electronic components, sold the photo division to Cosmo Digital Imaging in 2006. This will continue to operate under the name Mamiya Digital Imaging.

The Mamiya 645 model is one of the most widely used medium format cameras in advertising photography . The 6 × 7 models (RB, RZ) have advanced to become the most popular medium-format cameras worldwide among people and fashion photographers due to their "ideal" page format and the generous display of images on the large screen. Different manufacturers also offer a range of digital backs for both product lines. 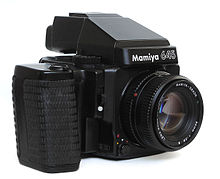 With the Mamiya ZD , which has an image sensor with 21.5 million pixels, Mamiya brought its first digital medium format camera onto the market in March 2006. At the same time, a digital camera back with the same sensor appeared.