Cooke triplet as the simplest anastigmat 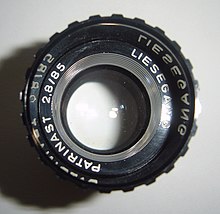 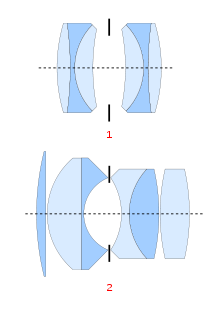 An anastigmat is an optical lens system (e.g. an objective ) that does not have a previously notorious aberration , astigmatism (lack of dots). For this purpose, the sagittal and the meridional image shell are brought into congruence and the field curvature is also eliminated, which cannot be physically achieved with a single lens.

The first anastigmatic lens was the four-lens Protar developed by Paul Rudolph in 1891 for Carl Zeiss . The simplest anastigmat is the Cooke triplet , created a little later from two convex and one concave lenses . On the Cooke triplet other important objectives build on, such as the four-element Tessar where the rear lens by type, cemented is replaced, positive power concave-convex-lens combination, or Heliar of Voigtlander , in addition, the front lens of a Cemented link is made.

All high-quality lens systems are now designed as anastigmats. Often these are variants of the triplet or Gaussian type. Exceptions are special cases in which only a small field of view is shown, such as the lenses of telescopes and binoculars .

Older camera and projection lenses in particular either bear the direct designation "Anastigmat" (e.g. the Novotrinast anastigmat from Ed. Liesegang oHG ) or suggest a corresponding property ( Patrinast , also a projection lens from Liesegang; Trinast from Carl Zeiss). Often these are lenses like the Cooke triplet . However, the unofocal double anastigmat from CA Steinheil shown follows a Gaussian type.